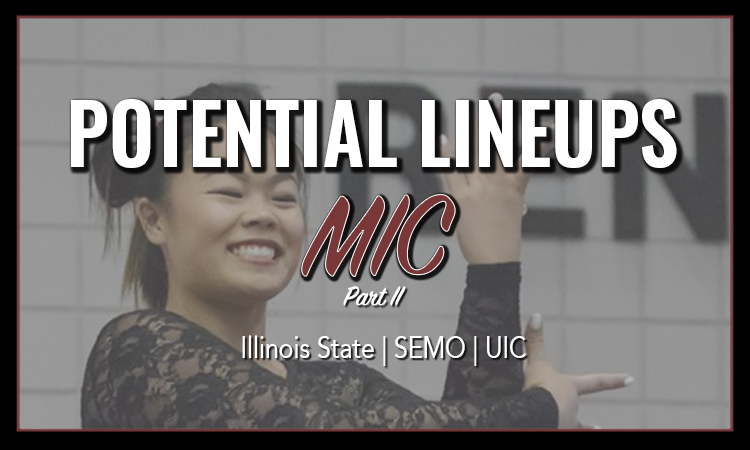 The Division I teams in the MIC conference have all struggled in recent years and failed to keep pace with their Division II counterparts. However, each of the three teams has won the conference title in the past 10 years, as well as had individual title winners in the past two.

2019 may be the last year we see a UIC gymnastics team. Can the Flames utilize its strong freshmen to have a successful swan song year? It is notable that Mikailla Northern underwent treatment for thyroid cancer during the offseason and may be limited in 2019.

Whether or not Northern will be healthy is a big question on vault since she was the only RQS last year over 9.800. Rylie Johnstone comes in with a tucked Yurchenko one and a half that scored fairly well in J.O. Alisa Sheremeta also competes a 10.0 vault, a Yurchenko full-on pike. She doesn’t quite get the full around onto the table, but with some cleaning it will be an exciting addition to the lineup as well.

Bars was UIC’s strongest event last season and should be again in 2019. Sheremeta should be part of those efforts. Her calm set features an excellent Jaeger and good toe point, plus an exciting one-and-a-half-twisting layout dismount.

Sheremeta has graceful and creative beam work that will be a boost to a Flames lineup that struggled a bit in 2018. She’s been consistent on the event with no misses in 2018 and a high of 9.775, the sort of J.O. score that translates to college 9.900s.

Northern has been a floor star for the Flames, and her health will be a question here as well. Alli Broad, who has competed floor several times in her career, may be a factor. Johnstone has a double pike set that should translate well to college, and Sheremeta brings her lines and toe point to a front double full routine with great performance quality that will make an immediate impact.

With Sheremeta coming in as a possible standout all arounder and a power event gymnast in Johnstone, the Flames are prepared for a successful 2019. Look for UIC to have a strong potential final season.

If you’d like to help save UIC women’s and men’s gymnastics, find out how here.

SEMO won the MIC title in 2014 yet has been in a slump since. After hiring alumna and former Lindenwood assistant Ashley Lawson, who brought some new faces to the freshman class, the Redhawks may be on the rise in 2019 despite losing stars Alexis Brawner and McKinzie Jones.

We do not have recent competition video of Makenzie Marciniak, but she has at least trained a Yurchenko full that would be a big asset in the Redhawks lineup. Anna Kaziska comes in with an excellent Yurchenko layout (9.750 SV); if SEMO needs to vault a layout, hers would work well since it is virtually deduction-free.

Kaziska brings a big Tkatchev and tight, tidy work that will boost this lineup. Maya Tran struggles with some form breaks but has the foundation of a strong bar set, including a double layout dismount, that will likely see lineup time as well.

Kaziska shines on beam. She has confident, steady work and excellent form. Look for her to take some beam titles this season. With no recent video of Marciniak, it’s hard to say how she will fare, but she has been seen training some interesting skills, like a tour jete half and back handspring layout stepout layout stepout. If she can put it all together, she should be a threat. Tran has graceful work and gorgeous lines and should see time as well.

The Redhawks are losing their top two floor workers and will need to rely on freshmen routines to fill in the gaps. Kaziska will make a difference, with a dynamic front double full and excellent leaps and performance. Marciniak has at least been training a piked full-in, which would also be a big asset.

SEMO was in a rough place at the end of 2018, with no official head coach and many valuable gymnasts departing. Lawson seems to have given the program renewed energy already, and Kaziska should be an exciting asset on her three best events.

The Redbirds have been in a slump since 2013, but they bring in three strong freshmen, including Spanish elite Sofia Iribarren and two-time J.O. nationals qualifier Mia Quigg.

There is no recent video of Charlise Doctor vaulting, but three years ago she performed a solid Yurchenko half and she scored as high as 9.725 in 2018, indicating she will be a strong vault option. Iribarren has competed a decent Yurchenko full that would do well in the Redbirds’ lineup. Quigg similarly has a full that should also see lineup time.

The freshmen are strong on bars. Quigg brings a sturdy set that includes a Maloney and stalder to double tuck dismount. Doctor has nice long lines and a Jaeger, and Iribarren brings elite-quality extension and lines; she has a dynamic Jaeger and double front dismount. All three should see the lineup.

Just about the entire Redbird roster tried out beam last year, so there is a lot of potential for movement in this lineup. Doctor has been inconsistent, but her lines and presentation make her an intriguing option. Iribarren has steady and confident work that could boost the lineup. Quigg has the rhythm and poise of an NCAA beamer, though she has also struggled with consistency.

The Redbirds will have a number of floor options since they return every RQS-holding member of the 2018 rotation. Doctor should factor in with a high-amplitude double pike set that is performed well. Iribarren brings a full-twisting double tuck that will elevate the lineup. Quigg is strong on floor with great performance quality and solid tumbling, including a big double pike. All three are threats.

All three newcomers are potential all arounders for the Redbirds. Look for this team to be stronger and more consistent than last year.

READ THIS NEXT: Potential Lineups: MIC Part I