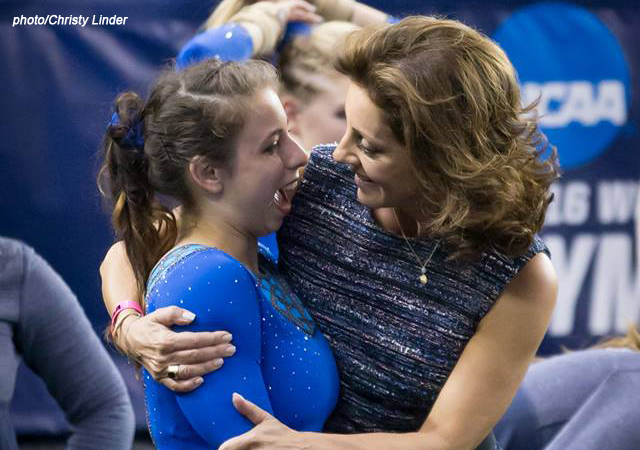 Class has started, teams are back together and training for the 2018 season has begun. In a few short months, arenas will be packed with fans of old favorites and new stars. As we look into 2018, let’s take a peek at some of 2017s unsung heroes: gymnasts who’ve broken records for their team, broken their own records and those who have just been rocks for their teammates. These gymnasts may not have the name recognition of many of their teammates but they’re integral, talented and in many ways, historic, nonetheless. They might have previously flown under the radar, but now it’s time to let them shine.

In a rising program, Catie Conrad became a crucial member of the Eagles as they reached a record-breaking season in 2016 that ended in their first-ever regionals berth. Conrad is as consistent a gymnast you can get, and a solid lineup choice for bars and beam, regularly reaching above a 9.8 on both. Though primarily a bars and beam worker, Conrad is up there with the rest of the solid all around crew, reaching a career high 39.350—and third place—in the 2017 MAC Championship. Though Conrad doesn’t compete all four weekly, her bars and beam should be strong enough to warrant the attention of any gym fan. Over the summer, Conrad announced she would be transferring to Pittsburgh for her final year of eligibility. What is undoubtedly Eastern Michigan’s loss, Pittsburgh is gaining a stellar gymnast that will hopefully now grab the attention of a new set of fans.

Mary Jane Horth is probably one of the better known gymnasts on this list and admittedly gets plenty of recognition from gym fans. That being said, Horth’s list of accomplishments and beautiful routines can end up on the back burner when ranking favorite gymnasts. With a 9.925, Horth became the Big 10’s bar champion and previously scored the program’s fifth highest score score ever on the event with a 9.950. Bars is where Horth excels—her routine is fluid, has gorgeous lines, and is clean from the first handstand to the dismount—but she also made a name for herself in her sophomore season, where she qualified for the all around at nationals, finishing 12th.

Another gymnast who is a superstar for her team but maybe not on the lips of fans is Tyra McKellar. McKellar is a near-regular all arounder who contributes solidly on each event. In 2017, she won five events and qualified for her third regionals as an all arounder, finishing 12th. Floor may be one of her best events, where three of her five event wins were, including a meet where she reached a career record of 9.925. As McKellar’s senior year approaches, she’s looking to continue to make records individually and for her team—and of course, if this doesn’t excite you, know she’s working hard on a 10.0 vault as well!

UCLA itself is not an unsung hero. It’s one of the strongest teams in the NCAA and tends to recruit some of the strongest elites (in 2017 UCLA made history with two Olympic gold medal-winning athletes on the team with Kyla Ross and Madison Kocian). With a team that attracts strength, has a massive walk-on section and household names, some gymnasts get lost in the shuffle—which is why Sonya Meraz is on this list. Meraz is a staple in the Bruins’ lineups here and there throughout the season, but she’s also the type of contributor that is willing—and usually does—step in at a moment’s notice. Throughout 2017, she often had to step in to help a teammate out on beam, vault and floor. And funnily enough, though bars is her speciality, her first career title was won this past season on vault. Meraz is a rock for UCLA that many overlook and shouldn’t, as she’s been crucial when the team needs it most and has undoubtedly contributed to the continued success of UCLA.

In a year of Beyoncé floor routines, there’s one that has been overlooked—Arizona’s Kennady Schneider. her career with the GymCats is impressive. Since her freshman season in 2015 she has choreographed her own floor routine, one of which being an impressive, difficult and exciting floor routine that earned Schneider a career high 9.925. With floor being one of Arizona’s weaker events, Schneider’s prowess on the event is even more valuable. Combining difficulty, great landings, fun choreography and an enchanting presence, Schneider’s floor should be on each gym fan’s must watch list.

Before we begin with freshman superstar Daisy Todd, it would be irresponsible to begin a discussion on a Temple gymnasts without first recognizing the Owls as having one of the most record-breaking seasons ever this past season. They’ve reset record scores, the majority of which came in 2017, and gymnasts and coaches earned individual honors all over the place. One of these is Todd. Todd earned the title of Co-Rookie of the Year for ECAC, the first individual award for Temple since 2011. Even more impressive is that Todd became the first Temple gymnast since 2009 to individually qualify for regionals. She competed all around at every single meet and recorded the third highest all-around score ever for the Owls, a 39.025, which was good enough for second place at the conference championship. Going into her sophomore year, fans will look for Todd to lead the Owls, and herself, to an even more historic season.

Since she started competing at SUU in 2014, Stacie Webb constantly bettered herself on her main events of beam, floor and vault, either earning all career highs in one season, matching them or beating them. Last season was Webb’s fifth year, and she surely went out with a bang. She won event titles at nine different meets, two of which were at the MRGC Championship for beam and floor, both earning a 9.9. However, the most impressive feat for Webb and the Thunderbirds was that Webb has the honor of holding SUU’s first ever perfect 10.0 score, which she earned on beam. It’s unfortunate she had to graduate and fans won’t be able to continue watching her break records, but ending your final season with a perfect mark and multiple event titles seems like the perfect farewell.

Like Horth, Jillian Winstanley is a name many fans know, especially with George Washington’s stock rising in recent years. That being said, in a team that relies heavily on upperclassman, 2017 was understandably focused on the seniors who have made GW into the program it is today. However, Winstanley is a superstar in her own right, and hopefully in 2018 she sees the focus she deserves. A stellar all arounder, Winstanley’s RQS ranked as the best in the EAGL conference with a 39.325, and she ranked in the top 10 on each apparatus in the conference as well. Though she unfortunately narrowly missed qualifying for nationals, Winstanley’s senior year will be another year for her to show her characteristic consistency, strong gymnastics, high scores and leadership for an up-and-coming team.