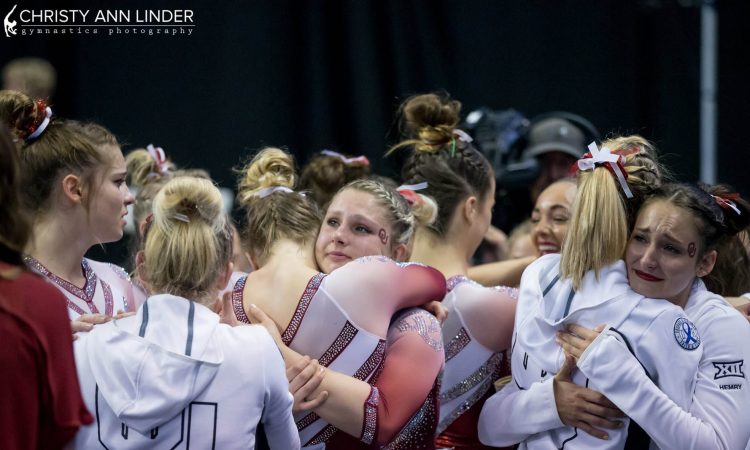 While there are a multitude of routines that we all love to watch, it is the rare set that brings us to tears. These are a few of our favorites that had us feeling a little damp around the eyes in 2017.

After being out all of her freshman year, rehabbing a rotator cuff and then being diagnosed with a rare autoimmune disorder that caused her to be legally blind for a period of time, this was Toronjo’s first competitive routine at UCLA. A huge comeback story from possibly being never able to compete again had us all a bit emotional.

​Okay so, not technically a routine. But none of us could claim dry eyes after this. 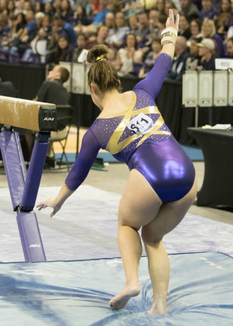 Not everyone may have caught this one due to the… interesting streaming of the Washington regional. But those of us that did catch Rose’s routine can claim some wet stuff slipped out of their tear ducts. Heading into its last event of the night, Washington only held a slim lead over Kentucky for the final nationals qualifying spot—counting a fall or a major wobble was not an option. Rose, essentially landing her dismount on one leg, fought like crazy to balance and stay up to salute before collapsing. Tears came later when everyone found out she’d torn her ACL in the dismount and basically pulled a Strug to keep the team from potentially counting a fall.

As the lone senior on Utah’s team in 2017, Rowe’s senior night was a particularly emotional one for her—and for us. It was almost impossible to watch the emotions running close to the surface all night for her and not shed a tear.

For most of us, this was the moment that it finally sunk in that this was one of the final times we would get to watch Capps’ gorgeous floor routines.

In the last routine of all of nationals, Mossett took to the podium to perform for her last time as a Bruin. While there were certainly no tears during this routine, there were definitely some shed afterwards.

Seniors’ last routines are always some of the most emotional. And really, we do it to ourselves with all the “she’s never going to do that again” thoughts. Watching Gnat nail her last beam routine, ending with a hug from D-D, certainly gave us all the feels.

​We all wanted so badly for Ross to have successful college career that her first ten and her resulting emotions were contagious. She cried. We cried. And let’s be honest, you cried too.

After an emotional rollercoaster of a day, we were all primed for waterworks no matter who won that all around competition. The Cinderella story of the girl who is barely pieced together enough to do one competition vault once in a blue moon and the look on her face as she finished her floor routine definitely had our eyes moist.

At the time Lee was competing what we all believed was the last beam routine of her collegiate career, which was emotional enough in and of itself. But then her nailing the routine and getting her first 10 on the event? We’re not crying, you’re crying. Fine, we’re all crying.

This touched many of us for several reasons. This was a season best routine for Burns, a 9.9 to tie for the floor title after starting her freshman campaign face planting her last pass of her first routine. In addition, this marked perhaps a passing of the torch as Burns (a freshmen) shared her floor title with Brianna Comport (a senior).