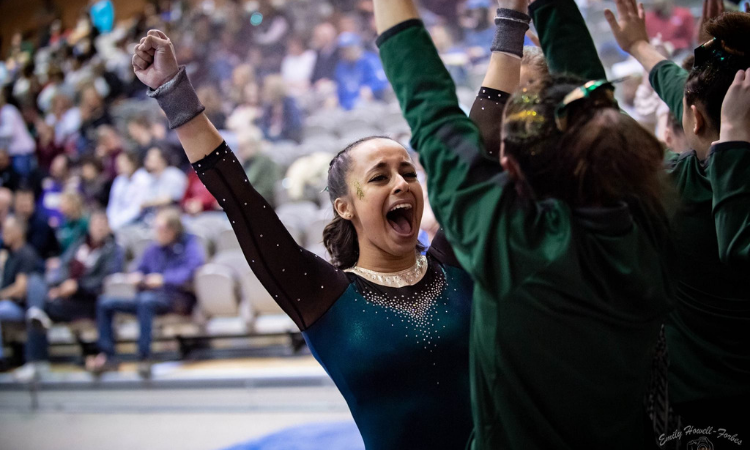 It’s no surprise that Oregon State was the team that increased it’s ranking the most, as it bounced back from a disappointing 27th place finish in 2018 to come within two tenths of making the NCAA finals in 2019. On a bittersweet note, the team with the second largest ranking increase was UIC, which moved up 17 spots from 54th in 2018 to nearly qualify for regionals in 2019, its last season ever.

Other notable rises in the rankings came from Denver and Minnesota, two teams that outperformed expectations in 2019, as well as Bridgeport, which bounced back from a rough 2018 season thanks to a strong freshman class.

On the opposite end of the spectrum, the three teams with the largest drops in the rankings were Pittsburgh, Sacramento State and Towson, who all struggled with depth throughout the 2019 season.

In general, as seen in the chart above, an increase in NQS led to an increase in ranking (and vice versa), but there are some notable exceptions in addition to the one mentioned above. Oregon State, for example, had the largest jump in the rankings, but its NQS actually decreased slightly from 2018 to 2019. This is a good example of a flaw in comparing NQS and ranking, as NQS does not take into account postseason performance. In the case of Oregon State, it ended the regular season in both 2018 and 2019 with a similar NQS, but its postseason performances were completely different.

The four teams with the most improvement in NQS were all DIII. Both UW-Stout and Rhode Island College set program records on every event and for the team total, and UW-Oshkosh and Gustavus Adolpus both had record breaking seasons of their own. Improvements in NQS was not the story for every DIII team, however, as four of the top five teams with the largest drops in NQS were also DIII teams.

Alaska, the gymnternet’s cult favorite team, was the most improved DI team in this category with a nearly two and a half point jump in NQS.

The next point we compared was the average difference in ranking and NQS for each conference.

Unsurprisingly, the conference with the biggest improvement in both overall ranking and NQS was the Big 12. All four teams in this conference improved on their 2018 placements in the rankings, and Denver and Iowa State improved in NQS.

The EAGL, which had the overall largest improvement in rank between 2017 and 2018, had the largest drop in both the ranking and in NQS on average.

In many cases, a head coach makes an immediate impact on the success of their team while in other cases, it can take longer. Still, it is interesting to look at how much impact a first year coach had on its team.

This year’s winner for most improved team with a first year head coach is Rutgers, whose rookie leader Umme Salim-Beasley helped the team improve nine spots in the rankings. This improvement is a good indication that Rutgers is going to be a team to watch in the coming years.

For largest improvement in NQS, while Rhode Island College did not improve its overall ranking, its NQS improved by nearly three points thanks to a record-breaking season led by new head coach Monica Massalles Nassi.