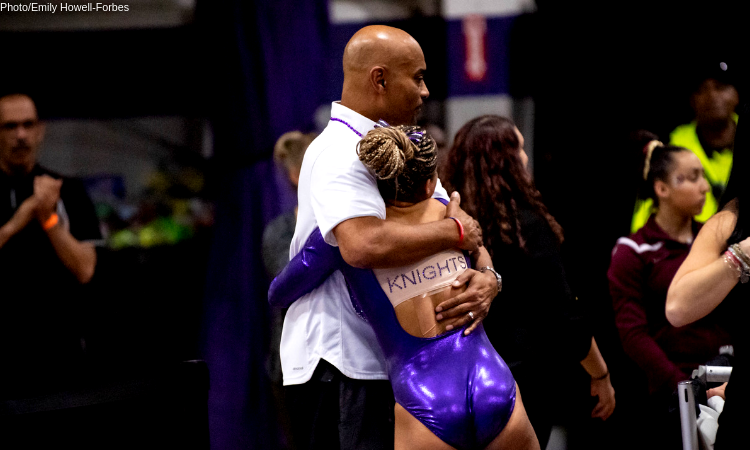 There was a new face at this year’s NCAA regional competition—Lindenwood. It was the team’s first time making it to this illustrious postseason meet, which qualifies only the top 36 teams in the country. So like any outsider joining a group with many familiar faces, the question on everyone’s mind was: Did they belong?

Division II gymnastics is largely misunderstand, which is a product of many factors. For one, it’s the smallest category of collegegiate gymnastics that exists in the NCAA. There are only six DII programs, so the group is severely underrepresented, just like any minority.

The other factor lies in our difficulty to grasp and define gray areas. In Division I, a majority of the competitors receive full-ride scholarships, and the ones that don’t participate as walk-ons. In DIII, there are no scholarships, so every competitor is a walk-on. Easy enough.

The break-down of aid in DII is a lot more nuanced. Schools are only allowed to grant up to six full scholarships, but these can be divided to spread the wealth amongst more athletes. For example, the coach can decide to give six full-ride scholarships to six gymnasts, or she can give half-scholarships to twelve gymnasts. The coach could even decide to break the scholarships into thirds, or creatively combine any of the above fractions—as long as no more than the full six are given out.

But when it comes to the actual gymnastics—the only factor that really matters—DII is no different than DI.

Lindenwood Gymnastics proved that this year by making it to NCAA regionals, which is no small feat. By finishing at No. 36, the team outranked 26 DI teams. Not to mention, Lindenwood is also only in its seventh year as a program, making it the youngest squad competing in the entire country.

The program’s head coach, Jen Llewellyn, often experiences the stigma that comes with being a DII program. “People look at it like—and we get this all the time—oh you’re just a DII school,” she said.

Her team lost to George Washington in round one of regionals but went on to win its third title at USAG nationals the following weekend. Its final team score at that event was a huge 196.375, which, to put in perspective, is around the average score of No. 13-ranked Auburn.

The squad also put up a monstrous 49.500 on the balance beam, making it one of only 10 teams to put up a score greater than a 49.475 on the event in 2019. Its best performance in that rotation came from junior Katie Bailey, who scored a 9.975 after being flashed a 10.0 from one judge. She has the same season-high score as Maggie Nichols, a junior from Oklahoma who’s ranked No. 1 in the country on the event.

When people ask Bailey about DII, she tells them divisions don’t matter in gymnastics. “We compete against everyone,” she said. “Especially with national rankings, every week we’re competing against LSU and Oklahoma, even if we’re just at home with one of our fellow conference rivals.”

Bailey said that qualifying for regionals helped her team and division get the recognition they deserved. “You don’t really have to have the name on your leotard to find who you are; it’s really just the gymnastics that you do.”

Lindenwood is not the only DII team to break stereotypes this year. Bridgeport has also proven it can compete with top athletes in the field.

This year Maya Reimers competed both a double layout and a full-in on floor, one of only a handful of gymnasts in the NCAA to throw two E-level skills in a single routine. While Reimers could also score very high with a much simpler routine, she likes to challenge herself.

“Doing a full-in is hard to everyone, but for me it’s easy because I’ve done it for so long,” she said. “So I like to push myself too, and impress myself because when you do something you think you can’t do, and then you finally compete it… It feels so good.”

Her coach, Byron Knox, also doesn’t like to settle. Under his leadership, Bridgeport has earned dozens of accolades over the years, including multiple USAG titles and an NCAA regional berth in 2013. He’s also one of the major reasons Reimers chose to compete for the school.

Like Bailey, she also received a 10.0 from one judge on beam at this year’s national championship. “DII seems way less exciting than Division I, but it’s just as competitive,” she said.

For potential recruits looking at Division II as an option, her message is simple: “You could come here and do amazing and be the best you can be. Give it a try.” 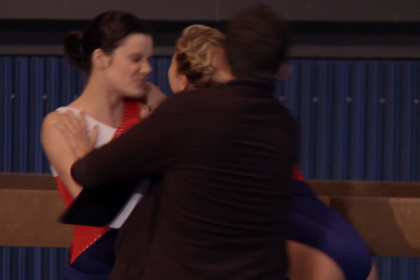