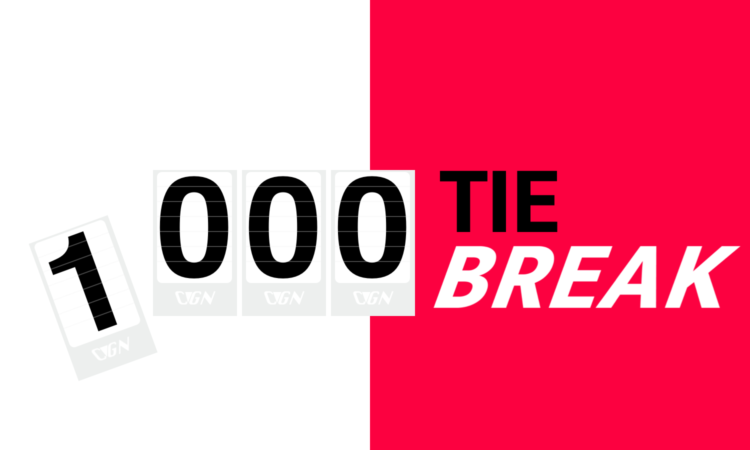 During the NCAA offseason, there’s a lot we miss about college gymnastics, from the sparkly leotards to the fierce rivalries. But the thing we miss most is every NCAA gymnastics fan’s favorite hobby:  arguing about scoring. In fact, we were so sad about it that we decided to get our discourse fix in the form of a brand new series. What are we going to argue about? Every gymnastics fan’s pet peeve:  ties where the routines are not equally good.

In each edition of The Tie Break, we’ll choose a tie from NCAA gymnastics history and debate until we decided how the routines truly should have been ordered. This week, we’ll be analyzing the 2021 Big Ten Championships, at which four gymnasts tied for the floor title with a 9.950.

Rebecca:  I could tell from the first watch that this one’s going to be really annoying, because NONE of these four really nailed their landings. What were your impressions?

Elizabeth:  I thought the same, but felt like it was the leaps that weren’t as strong?

Allison: YES, Elizabeth. The angle didn’t do Loper’s leap pass any favors for me.

Elizabeth: Yeah! Potentially low front leg and then a LOT of them had weird rotational issues that I’m excited to get into more…

Allison: Yeah, not one routine made my spine tingle with stick joy.

Mariah: All of them had some foot movement on at least the first pass.

Elizabeth: It was mostly the in-air stuff on the acro skills that were messy to me rather than the landings themselves.

Mariah: I couldn’t tell much about Loper’s leaps either. We need better camera angles!

Rebecca: Rotation precision on leaps is definitely a late-stage option for separating routines. Anyone got a really strong opinion on either first or fourth place?

Elizabeth: First was a toss up for me, but I had Loper as a clear fourth.

Allison: Guerin was fourth for me. Easily.

Mariah: I had Loper as fourth too.

Elizabeth: Henderson and Wilson were my first options. So I could be persuaded about putting Guerin last for sure.

Rebecca:  Interesting. I had Wilson and Loper T-3 and I was waiting to be convinced. To me Wilson didn’t have a single deduction-less landing.

Elizabeth: It was far from Guerin’s best routine, and when I really sat down to analyze it, the choreo just doesn’t do it for me? Which is weird because she’s well known for great floor!

Rebecca: I have Henderson first. Good form, good enough leaps, one bad landing but one truly great one.

Elizabeth: I thought all of Wilson’s landings themselves were fine, but the round-off back handspring was indescribably weird? I don’t know how to talk about it, it just looks off but then she surprises you with a good salto? I agree — Henderson first.

Mariah: I agree on Wilson’s landings. I think Henderson had the least mistakes overall.

Rebecca: Wilson’s bent knees on her back handsprings drive me completely nuts. Hate it.

Elizabeth: Sounds like we may be in agreement about our top routine. I could have done with a bit more toe point but for this exercise, she still stood out as the best.

Rebecca: Close to consensus, anyway. And yeah, this is not a super toe point-y group, so I don’t think imperfections there drop Henderson down the rankings.

Rebecca: Henderson is also the one whose leap landing was really good.

Allison: Yes! The only one with leaps that made me smile.

Rebecca: Allison, can you live with Henderson first?

Allison: Only because of her leaps. But yes!

Elizabeth: In terms of Guerin and Wilson, both had outrageously rotated leaps and jumps. Like, you know what the intention was, but it was nowhere close to 360 or 180.

Mariah: I also noted that for those routines.

Rebecca: The rotation imprecision is an every-routine thing for Wilson too — this wasn’t a bad day.

Elizabeth:  With Wilson it’s especially notable because she starts in the diagonal and lands not facing anywhere near where she should — the other diagonal rather than parallel to the side.

Rebecca: Definitely, and do I remember Loper had a hop back to lunge situation after her leap pass?

Allison: Yeah, Loper did but it felt like a halfhearted choreo hop.

Elizabeth: Loper’s two and a half was also wonky to me. All of that plus her low switch ring front leg has me putting her last.

Allison: Yeah, the ring leap wasn’t doing her any favors for me.

Rebecca: I can also live with Loper last. I think her landings were marginally better than Wilson’s, but it’s a close thing. They certainly weren’t emphatic.

Mariah: I agree on the two and a half and the ring. She didn’t sell her choreography either.

Allison: It felt like she was just going through the motions?

Elizabeth: Man is Guerin vs. Wilson going to be hard, though! I don’t even know which one I want to argue for. I’m tempted to say Guerin over Wilson because of general (minor) form, but Wilson’s split positions are outmatched.

Rebecca: I think Guerin’s landings were potentially the best of the day.

Mariah: I think Wilson had a few more things to be picky about, but it’s definitely close.

Elizabeth: For Guerin overall I noted legs apart in her first pass back handspring and messy full-twisting double back legs, leap pass rotation and last pass landing — plus the overall vibe wasn’t my favorite.

Rebecca: Interesting, I had the first pass as overrotated but the second clean.

Allison: Too much of the middle of the routine was wonky choreo for me with Guerin.

Rebecca: I don’t really like either of these two dance-wise, so I’ll call it even.

Mariah: I had the second clean as well but I noticed the legs in the back handspring for sure.

Elizabeth: For Wilson I noted that she had the best full-twisting double tuck form in the air with maybe a bit of flexed feet, but the lead into her tumbling is off in an indescribable way. Plus of course the leap series rotation and a weird landing on the second pass.

Allison: Yes! Her full-twisting double was the best of all of them.

Rebecca: Guerin definitely has slightly more form but neither is perfect on that front.

Mariah: I agree with that.

Elizabeth: If I had to choose the better vibe, I’d probably go with Wilson over Guerin, but it’s close. I didn’t fall over for either.

Mariah: I can live with that.

Rebecca: I do feel that Wilson should lose on landings.

Elizabeth: I thought I was leaning Guerin second overall, but now I think I’m leaning Wilson?

Rebecca: I had the Wilson landings as meh/bad/meh and Guerin as meh/good.

Elizabeth: I honestly didn’t see anything egregious on the landings — at least not like the last tie break we did where people had obvious movements or slides.

Allison: Wilson just had the cleaner form in the air for me.

Elizabeth: I thought so too.

Elizabeth: I definitely noted the second pass landing, but I felt it was similar to Kyla Ross’ last week, which we agreed was fine because it was strategically choreographed. Here’s what I put in my notes while watching:  “Maybe the second pass landing was ever-so-slightly uncontrolled, but the movement into choreography hid it relatively well.” Definitely a meh landing, but I don’t think I’d use it as The Reason to dock her.

Mariah: I noted it as a weird landing as well, but I wasn’t quite sure how to judge it either.

Allison: I had “steps forward but ‘controlled.'” So we have the same idea there.

Elizabeth: So what do we think our conclusion is for second? At the very least it’s another close one.

Allison: Wilson is second for me, Guerin third.

Mariah: I can live with that since it’s so close, but I would probably have it swapped honestly. Wilson’s leap rotation issues may just be clouding my judgement a bit though.

Rebecca: Yeah I’m with Mariah, but it is tough.

Elizabeth: Let’s break it down: Both had poor leap/jump rotation. Wilson had superior acro form in the air but poor form in her lead-up skills. Wilson wins on “vibe.”Guerin potentially better overall landings?

Rebecca: Guerin just seemed like a tighter routine overall while Wilson was a touch chaotic throughout.

Mariah: I think Guerin is just a bit more intentional in her choreography, but that may have a lot to do with the style of the routine. I think both sold it pretty well.

Elizabeth: See, I felt the opposite with their choreography!

Rebecca: I do like Guerin better dance-wise as well. To me Michigan is usually a weak choreo team, though the last few years have gotten a bit better.

Elizabeth: I do agree with that. I was actually expecting not to have an issue with Guerin since everyone always touts her routine and choreo as being top tier, but I didn’t care for it. I don’t know if this is the right word, but it was too…jerky?…for me. Like a lot of intensity but not as much purpose in the movements.

Mariah: Intensity was probably more the word I was looking for to describe it. Like the movements were sharper than Wilson’s, but it’s mostly a choreography thing and not a performance thing, so it’s hard to compare the two.

Elizabeth: I love intensity, but it has to have purpose. I don’t know!

Rebecca: Ugh! I don’t know. Should I switch to Team Gabby just to end it?

Elizabeth: Do it! Give into peer pressure!

Rebecca: Okay, we give in. It’s very very close though!

READ THIS NEXT:  The Tie Break: 2019 National Championship Floor 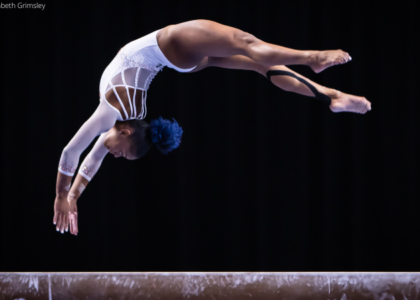