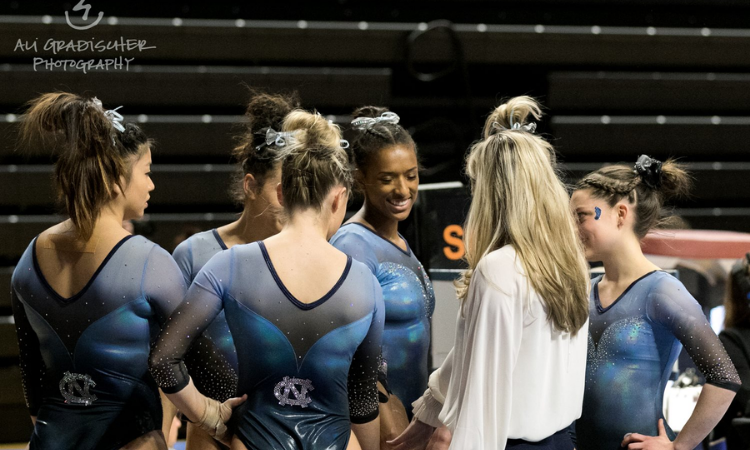 What a way to kick off Raleigh regionals! These two EAGL teams are about as closely matched as you can get: No. 33 Towson and No. 35 North Carolina are separated by less than half a tenth in the NQS rankings. Towson has a slight advantage scoringwise with a 196.700 season high to Carolina’s 196.65, but the Tar Heels have a higher season average. At their head-to-head matchup in late January, host North Carolina eked out a victory by the slimmest of margins, going 196.00 to Towson’s 195.975. So yeah, every indication is that this is going to be an absolute nail biter!

The Tar Heels have also had a pretty spectacular year of their own under first year head coach Danna Durante. The regular season champions struggled at EAGL championships, but remained undefeated in conference play during the regular season. Even without star freshman Lali Dekanoidze, they should be able to give the Tigers a run for their money.

Whichever team advances to Thursday’s competition, at least one individual from tonight’s session will also qualify: Towson’s Jenna Weitz qualified on beam thanks in part to her fantastic switch leap to layout-stepout to split jump series. North Carolina’s Elizabeth Culton earned regular season first-team All-America honors on beam last year and has qualified individually on both beam and bars this season while her teammate, freshman star Julia Knower, is an individual qualifier in the all-around.

Added bonus, this play-in will have commentary provided by the impeccable duo, Christina Chauvenet and Rachel Garland. You can watch along on ESPN+ with live scoring available here.

Weitz (Tow): Y full, a little leg sep on both the pre-flight and in the air. Moderate pike-down and a step, but a solid start for the Tigers. 9.700

Shearer (UNC): OK, didn’t show hers on the broadcast. Was a hit per the commentators. 9.725

Borkowski (Tow): HIGH Y full, but not a ton of distance. Landed very straight-bodied but with the chest well forward and took a step. Unrelated, her dark red lipstick is on POINT. 9.625

Knower (UNC): A bit of leg sep and foot form on her Gienger. Very nice, tight position on her bail to handstand. Great handstand positions throughout. HIGH FTDT with a college stick. 9.700

Vitoff (Tow): Y 1.5, good form in the air but not a ton of distance. Very stiff legged on the landing, minor foot adjustments. 9.825

Davis (Tow): Blocks very far back on the table. Looks like a mid-vault adjustment, decided to go for the full instead of the 1.5 A bit loose and slightly piked in the air, hop back on the landing. Good decision, because I don’t think she could have pulled off the Y 1.5 with that missed block. 9.800

A solid opening rotation for Towson, and not too far off their season high of 49.200. This is a great foundation for the Tigers to build on

Credit to the Tar Heels for avoiding counting a fall, but they’ll be disappointed with a sub-49 rotation. This is an event where they’re capable of distancing themselves from the competition and while this score is by no means a disaster, it means they’re going to have very little wiggle room on the remaining events.

Greene (UNC): Great Y full to open. Not the biggest or furthest, tidy in the air and but a very clean landing. 9.775

Schaefer (UNC): Y tucked full with a small hop to the side. Maybe twisted early onto the table? That’s a tough vault to make look pretty, but she did. 9.750

Vitoff (Tow): Short first handstand. Gienger with a large leg sep. FTDT with a step back and a step into the landing. 9.825

Summey (UNC): Big Y full with a big leg sep on the pre-flight and pike-down, small shuffle in place. 9.825

Girot (Tow): Good first handstand. Large leg sep on the Gienger. A bit uneven on her bail and the legs came apart. Big FTDT with a stuck. 9.750

Vaillancort (Tow): Very crisp blind change to straddled Jaeger. Bail a little close, but she works right through it. Lots of leg sep on the DLO, but the judges might not see it. Lands on her toes with her chest forward, but doesn’t move. 9.825

Stewart (Tow): Blind change to straddled Jaeger and she come off. Remounts and immediately scoots off on her Pak. Stands up laughing, shrugs, and salutes. Give her a 10 for style.

Great vault rotation for the Tar Heels. This is not their strongest event, and that was about as good as I’ve seen them do it. Summey’s was the highlight for me; she needs to upgrade that thing, stat!

Lovely bars work from the Tigers! Stewart’s falls aside, they looked clean and confident. Hong’s double front is my new gold standard; if it doesn’t look like that, don’t bother doing it.

Oh hey! Sami Durante, Kiya Johnson, and Sierra Ballard are in the front row. Pan to mom Danna who’s doing her best to pump up the crowd.

Bolen (Tow): Shaky on the bhs loso with a leg-up check and swim. Some more checks on the leap series. Pretty side gainer full. Ouch, 9.200.

Nam (UNC):Strong opening double pike, great landing. Fhs Rudi, not the highest, but another great landing. Switch half to wolf full, high amplitude. Back 1.5 to front full, a little off center and dances out of it. 9.775

I have no idea why these routines are happening simultaneously.

St. Brice (UNC): Back 1.5 to front lay, slight leg sep. A little underrotated on her wolf 1.5, back leg shy on her switch leap series. Double pike with chest down and a bit of a bounce out, looked a little surprised on the landing but played it off well. 9.700

Keener (Tow): Floaty bhs loso. Switch leap to tuck 3/4, well done. Cat leap to a very low front toss, but she hangs onto it. Side gainer full with a hop. Not the most aggressive, but a solid hit. 9.625

Greenlow (UNC): Flawless opening double pike! Switch full to wolf half, didn’t quite hit 180 on the former. Punch front through to back 2.5 with a big bound OOB. Back 1.5 to front lay, love the rise on the lay. 9.575 seems harsh even with the OOB.

Weitz (Tow): Switch leap to loso. A big off on the landing and skips the split jump. Front aerial to bhs, bit of hesitation in between but will be credited. Small arm wave. Pretty position on her split series. Side aerial to back full, stuck. 9.775

Culton (UNC): Clean double tuck, well-controlled landing. Switch ring to switch side, lovely. Front lay to Rudi with a minor bounce out. Switch side to Popa, perfect positions on both. 9.850

Knower (UNC): HUGE double pike, a little out of control on the landing and a crossover step goes OOB. Fhs front full to a floaty front lay, gorgeous. High double tuck, much better control on this landing. 9.700

Hurst (Tow): Large wobble on her full turn. Bhs loso and comes off, too bad. Punch front full, a little bit piked and a step back. 9.075

Weil (UNC): RO to double tuck, small bounce out. Front full to front lay, very well done. Good rise on the front lay. Switch side to Popa, maybe a hair shy of horizontal. Double pike with a little food slide back, but a strong finish that should allow the Tar Heels to drop Greenlow’s score. 9.775

The Tar Heels capitalized on a miss from Towson on beam and pull into the lead. While this is still a close meet, UNC’s got to be feeling pretty good heading into its strongest event.

If the Tar Heels gets a 49 flat (well below their season average, but they are coming off counting a fall on beam at EAGLs), Towson will need a 49.350 to overtake them. Their season high is a 49.275. So yeah, it’s going to be a very exciting final rotation!

Summey (UNC): Bhs loso with a minor waiver. Clean full turn. Switch leap to straddle 3/4 with chest down. Side somi was a little funky, but held onto it. Back 1.5, stuck. Not her cleanest or most confident routine, but a solid lead-off. 9.700

Bolen (Tow): Tidy double tuck, minor foot slide. Front lay to Rudi, very off center in the air but a nice landing. Good position on her leap series. Missed the end of her routine. 9.800

Shearer (UNC): Pretty full turn. Bhs loso with a little leg form and a small leg-up check, but she brings it back on. Switch leap to switch side, good. Front walkover to side gainer full with a teensy hop. 9.750

Nam (UNC): Clean bhs loso with a little check. Switch leap series, just a touch shy on the back leg. Side aerial with a hip waiver. Back 1.5, stuck. 9.825

Vaillancourt (Tow): Huge double tuck, little bit of a foot slide. Switch full to Popa, nice positions on both. High back 1.5 to a very flay front lay. Rudi to double stag, travels sideways and a little uncontrolled in the air on the jump. 9.825

Culton (UNC): Bhs loso, so floaty and extended. Cat leap to switch side, fantastic. front aerial to beat jump, lovely. Kicks out her full turn. Clara Hong and Liz Culton split screen is absolutely my aesthetic. Side aerial to back full, slightly off center but stuck. 9.925

Stewart (Tow): Front lay to Rudi, a little flat on both and has to slide her foot. Switch full to Gogean, looked like her back leg wasn’t quite at horizontal. Underrotated her double tuck, bounces forward. 9.850

Greenlow (UNC): Nice full turn. Bhs loso with a little hip check and front foot adjustment. Cat leap to side aerial, a touch low but pulled it off. Switch leap to switch jump to beat, very secure. RO back 1.5, minor leg form and not a ton of rise but a solid landing. That should do it for the Heels! 9.875

Wow, what a finish for UNC. If you’re going to qualify to regionals on beam (after coming off a rough beam rotation at conference championships, no less…), might as well score your second-highest event score of the season!

Towson should similarly be proud. That was a hell of a comeback with no counting scores under 9.800. This is a team on the rise and a team to watch. Jenna Weitz will be competing tomorrow on beam during the second session.