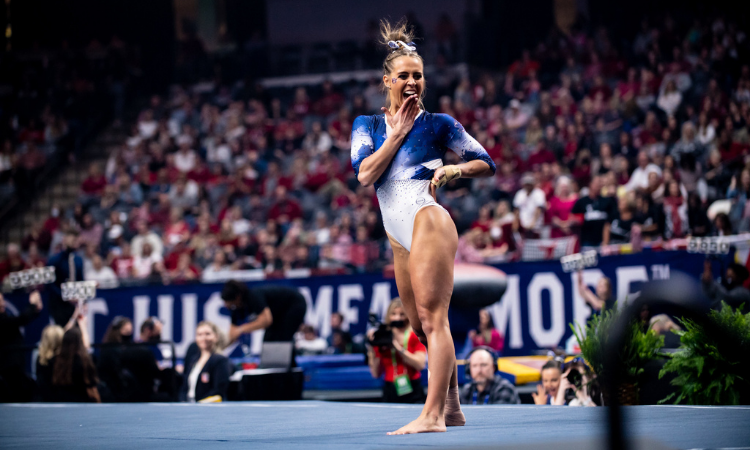 It’s almost time for the NCAA gymnastics postseason again! We know where each of the top 36 teams in the country will travel to compete for a chance at advancing to nationals, and in the days leading up to the championships, we’ll preview and analyze each of the four regionals, discussing which teams have a chance of moving on each day and which individuals could qualify as well.

Last up is the Auburn regional. Wednesday will feature No. 28 Iowa State and No. 36 Western Michigan in round one. Thursday we jump into round two action with No. 7 Auburn, No. 10 Kentucky, No. 23 Georgia and No. 27 Southern Utah competing in the afternoon session and No. 2 Florida, No. 15 Denver, No. 17 Ohio State, and the winner of round one in the evening session. Two teams from each of these Thursday competitions will advance to round three on Saturday where the top two from that meet make it to nationals.

Western Michigan smashed program records left and right this season. All-arounders Payton Murphy and Sarah Moravansky lead a resurgent Broncos squad that is coming into regionals as the MAC’s only representative. Iowa State finds itself in the play-in despite its No. 28 ranking. The Cyclones started the season rough and have competed without senior Addy De Jesus for the majority of the season. However, they appear to have found a groove and haven’t gone below 196 since Feb. 13.

If both teams perform to their potential, this is Iowa State’s meet to lose. The Cyclones are most vulnerable on bars and beam where they have had some shaky performances. What they may lose there, they should be able to make up for on vault, a lineup that is top 20 nationally. Meanwhile, Western Michigan’s highest-ranked event is beam; the Broncos will want to capitalize on that. Interestingly enough, both teams are tied for 30th on floor; Western Michigan holds a slightly higher average and high. That score will be critical should the Broncos hope to upset the Cyclones.

Iowa State’s Makayla Maxwell’s and Emilie Hong’s vaults are great; Maxwell earned a 10 earlier this season for her Yurchenko one and a half, and Hong has been very consistent with hers. Cyclone teammate Maddie Diab is stellar on floor; she also notched a 10 earlier this season. Murphy and Moravansky highlight the Broncos’ routines. Murphy is especially strong on beam and floor while Moravansky excels on vault and floor.

Auburn has been one of the NCAA’s biggest success stories in 2022, with the arrival of Suni Lee heralding a banner year for the Tigers. The Tigers are poised to cruise out of this session and contend for its first team nationals berth since 2015. Kentucky has had a quieter yet still successful year, with Raena Worley leading the Wildcats as many people’s dark horse candidate for SEC Gymnast of the Year (Florida’s Trinity Thomas was ultimately awarded the honor). Georgia spent much of the regular season in the SEC basement and finished there as well when it got last place at the championship; nevertheless, the Bulldogs have made it to regionals as a team, which is more than a lot of people expected after the first few meets of the 2022 season. Lastly, after an impressive year for the MRGC, Southern Utah enters regionals as the conference’s lowest ranked team, but the Thunderbirds still had an impressive season which saw multiple team and individual records broken.

Auburn should cruise through handily. Auburn Arena has shown itself to be one of the NCAA’s most raucous and unpredictable venues this season, so that environment will be a factor in and of itself. Kentucky has been there already this season, but Georgia has not; it will come down to which SEC squad handles the road environment best. Kentucky can pick up slack with a higher vault score; last week’s outing at SECs was the lowest the Wildcats scored on the event all season. The most obvious thing Georgia can do is avoid yet another beam-plosion, which has happened twice in the last four outings. Southern Utah did earn its highest ever road score this season when it went 197.000 at BYU, so the Thunderbirds are capable of competing here, but they will need some help from the other teams’ errors.

Derrian Gobourne and Suni Lee are always exceptional, but the aforementioned home crowd should propel them to especially exciting heights. Worley is Kentucky’s biggest name, but former nationals bars qualifier Cally Nixon should give one more big performance on her best event. After some injury uncertainty to start her season, Georgia sophomore Victoria Nguyen quietly earned the Bulldogs’ only All-SEC honor. She is a bright spot in the Bulldogs’ bars and beam lineups. Southern Utah senior Shylen Murakami’s bars routine is stunning; she broke her previous school record of a 9.950 with a 9.975 earlier this season. Her teammate Rachel Smith performs a unique roundoff layout step-out series on beam that’s worth watching, and Karley McClain’s floor is a highlight.

With Auburn and Kentucky likely making it out of this session, Georgia’s only hope for a nationals appearance will be from individuals. Senior Rachel Baumann seems to be the most likely contender for her floor routine, having scored her first 10.000 this season. Speaking of floor, Kent State’s lineup was the best in the MAC in 2022. Guns has scored as high as a 9.975, so a good day for her would put her right up there with the elite floor workers of the regional. Top-30 all-arounder Murphy could also clinch the all-around berth.

Florida had some perplexing lineups to start of the season but has slowly morphed into the ideal top six on each event. The Gators have surpassed the 198 mark five times this season, doing so as recently as their last outing at SEC championship (which they won); it’s their nationals ticket to lose. Denver has been one of the most injury-plagued teams in the country, most notably losing Lynnzee Brown to an Achilles tear for the second time in her career. Jessica Hutchinson picked up the slack as a poised all-arounder, but the Pioneers don’t have the depth of other rosters. Ohio State is a lot better than its fifth place finish at Big Tens last week suggests, boasting top 20 bars and floor lineups and a very respectable 197.525 season high.

It’s Florida and it’s the postseason, so nothing is guaranteed. But also, it’s Florida, and a fantastic SEC championship-winning performance should energize the Gators to crush this session and move on to Saturday. Denver and Ohio State will battle for that second spot, though; look at how close those NQS and average scores are. The Pioneers have been vulnerable since Brown went down; they’ve managed without her and most recently put up a 197.250 at Big 12s, but it will take a nearly flawless day to remain in that second qualifying spot if Ohio State also competes to its potential. The fourth team will face an uphill battle to advance past the other three no matter which it ends up being.

Trinity Thomas hasn’t done the all-around enough this season to have an NQS, so watch today to see which lineups she’s in. Obviously, each one will likely be stellar. Denver has some lovely beam routines, especially freshman Momoko Iwai’s, which won at Big 12s last week, and you won’t want to miss Jessica Hutchinson’s beam and floor, either. As for the Buckeyes, it’s likely senior Claire Gagliardi’s last outing if they don’t advance; don’t miss her delightful floor routine. Classmate Colby Miller won a share of the Big Ten bars title last week, too, so that’s another impressive routine to watch.

Three of the individuals in this session have earned 10s on their respective events: Makayla Maxwell, Mara Titarsolej and Maddie Diab. Regardless of whether Iowa State loses in the play-in round, expect Maxwell and Diab to contend for big scores as individuals. DeMers will look to go to nationals as an all-arounder for the second time, but her odds will decrease greatly if Denver doesn’t advance and Big 12 Gymnast of the Year Hutchinson is also in contention.

Florida, Auburn and Kentucky will almost certainly appear in this final, with the fourth spot likely belonging to Denver or Ohio State. We all remember the night Auburn and Florida tied for a huge 198.575 each in this very same arena, so the bar is high for an exciting rematch between these teams and whoever may join them, provided nothing goes wrong.