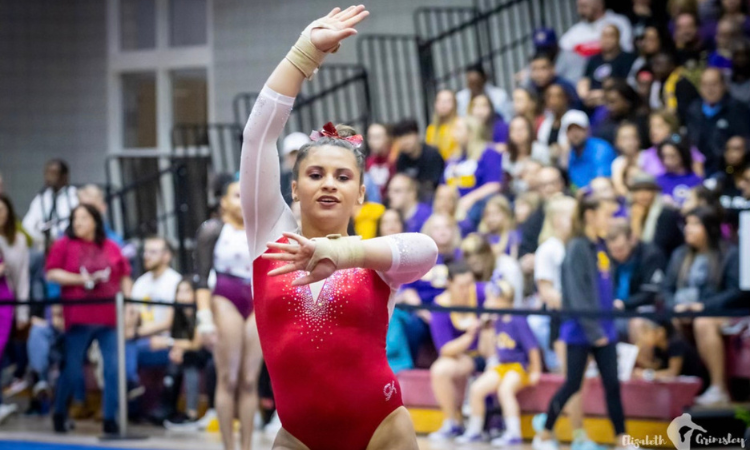 The Kentucky Wildcats are a team that slips from the headlines in the SEC, but have a consistent group of athletes that improve on a weekly basis. The Wildcats sit on the edge of creeping into that SEC evening session and historically peak at the right time to add some postseason underdog thrill. Arkansas rose to new heights in 2021, but has not found the same rhythm in 2022. Freshman Leah Smith had a breakout performance last week scoring above a 9.800 on each event.  However, 6th year senior Sarah Shaffer was limited to bars and classmate Maggie O’Hara is coming off two consecutive weeks of falls on bars. The Razorbacks will need higher marks from all athletes to set the tone particularly on beam and bars.  Aside from the fierce team battle, the all around competition between Kentucky’s Raena Worley and Arkansas’ Kennedy Hambrick should be fierce. These athletes have been strong anchor’s for the respective programs and will be neck to neck on all four events. Both athletes bring in the opportunity for perfection to be achieved on each apparatus.

It is a thrilling Friday night filled with SEC dual competitions. While this one may not be the center of attention this evening; it certainly should not be ignored. These two programs have a special spark that should light up the night.

Raena Worley will not be competing in the all around tonight for Kentucky according to the broadcast.

DeGuzman (Kentucky): short on first handstand, nice height on her jaeger, large leg separation on her final handstand. hop back on landing. 9.875

Nixon (Kentucky): Nice handstand to Maloney to bail. She is spot-on with these handstands. Dismounts with a sky-high full-in. 9.875

Luksik (Kentucky) Ray, solid, short on bail handstand, buckles and has to take a step forward on the dlo dismount. 9.775

Angeny (Kentucky) Gorgeous handstands, nicely done jaeger and dismounts with the dlo tonight. A hop on the dismount. 9.875

Elswick (Ark): FTY, One of the cleanest vaults in the air. Steps back and slight hop on landing. 9.825

Worley (Kentucky): Good handstand and Tkatchev to start. Fabulous final handstand and she gets the first stuck dismount for Kentucky with a great full-in. Highlight of the rotation for sure. 9.900

Kennedy Hambrick is also out of the all around tonight and did not compete on vault for Arkansas.

A pretty solid rotation for both teams. Nothing spectacular, but no disasters for either program. Kentucky and Arkansas are going to need to focus on dialing in on landings to keep up with its SEC conference rivals to keep up with the conference pace.

Procasky (Kentucky): FTY, Gorgeous form in the air with great distance. Sticks the landing with a slightly low chest.

Scalzo (Ark): Nice first handstand, jaeger, could use a bit more amplitude, fights for the landing on her DLO dismount.

Wilson: (Kentucky): Front Pike Half, Gets her chest up. Hops back on landing.

Kelley (Ark): Making her Bars debut. Falls on her Maloney. Repeats the skill with a large leg separation. Nice final handstand and takes a small hop back on the dismount.

Magnelli (Kentucky): Front Pike Half. One of her better vaults in terms of amplitude and form. Large hop back on landing.

Smith (Ark Starts off with a nice handstand, leg operation on the Maloney. Gorgeous bail. Ends with a beautiful handstand to a stuck dlo dismount. Some arm movement on the landing.

Well.. my wifi just went out while I was updating the content.. The not so bright side of living in an apartment complex..

Its back now.. but Arkansas will be counting two falls as Shaffer fell on her Maloney

Worley (Kentucky): The improvement on her Yurchenko 1.5 from last year is immaculate.. Sticks the landing.

O’Hara (Ark): Toe-on to jaeger, nicely done, beautiful handstands throughout and gets the stuck DLO dismount. Good for her to see her hit after two weeks of falls.

Arkansas will be forced to count a fall on bars for the second week in a row. The bar consistency struggles remain for the Razorbacks. Kentucky had a strong vault rotation with stuck landings from Worley and Procasky. The team’s front pike half vaults are steadily improving week-by-week which is promising for its postseason chances. Historically, Kentucky has struggled with execution particularly with amplitude and landings on those 10.000 start values. It also looks like Bailey Bunn may be missing from this competition for Kentucky.

LaClair (Kentucky): Starts off with a double pike, Switch side Popa Popa, nicely done, fhs to front layout to front full, bends the knees to make it around and takes a slight step back, solid fhs to Rudi to end.

Gamiao (Ark): Debut career beam routine. Standing loso loso. I love the difficulty and uniqueness she provides here. Does encounter soft knees on the loso’s though. Side sumi, solid. Dismounts with a RO 1.5

Albores (Kentucky): Double Tuck, great, front lay to front full, slight form break, short on her switch half popa leap series. Double Pike, pulls it around but does not quite get the amplitude on it.

Lovett (Ark): Begins with a beautiful full turn. Front aerial to loso, slow on the connection, switch leap to split jump to beat jump, nicely done, Side aerial to back full, off to the side with a small hop back.

Magnelli (Kentucky): Kentucky does a great job of maximizing loso landings. Magnelli starts with a solid Rudi to back loso, Nice leap pass, Tad short on the double pike. I felt like that was the shortest floor routine ever, but it was nicely done. Looking forward to eventually possibly seeing her in the all around.

Smith (Ark): Lacks flexibility on her switch leap to straddle quarter, huge wobble and is forced to touch the beam on her Bhs loso series. Minor balance checks occurring throughout. Dismounts with a double pike. Hop back on landing.

Hagis (Kentucky): Fhs rudi to back loso. Anna has such a great performance quality and really captures the character of the performance. Ends with a double pike.

Update on Bailey Bunn: Had an MRI this week

Sedlacek (Ark): Starts off with a solid full turn, bhs to layout, large leg lift, but stays on. Side sumi, huge wobble. Solid dismount to finish. Manages to finish the routine without a fall, but encounters major deductions.

Davis (Kentucky): Overpowers the double pike to start and has to take multiple steps back. Somehow manages to stay in-bounds. Gorgeous leap pass, Ro 1.5. to lay. Stunning form and precision in her tumbling and dance elements. Finishes with a double tuck.

Elswick (Ark): BHS loso, off the beam. Arkansas will be counting a fall on bars and beam. gorgeous amplitude and flexibility on her split jump to split 3/4. Nice front aerial. bhs 1.5 dismount to finish. Hop on landing.

Worley (Kentucky): We will be seeing her on Floor tonight! Nice full-in to start. Fabulous flexibility on her leap pass. FHS to front full to front lay, I have no idea how she saved that.. her foot definitely slipped on the front full landing and she managed to pull it off with minimum if any deduction is taken. Finishes the routine strong.

Exhibition performance from DeGuzman (Kentucky): Completely under rotates her first pass and she’s injured on the floor. DeGuzman is being carried off the floor.

Unfortunately, the rotation didn’t end on a positive note for Kentucky with an injury to DeGuzman (the exhibition floor performer). The team will be extending their lead over Arkansas as the Razorbacks are counting a fall for the second rotation in a row. Arkansas is struggling with balancing difficulty and execution on beam resulting in significant errors.

Luksik (Kentucky): Onodi, slight wobble, Bhs loso, off to the side but stays on with minimal movement, cat leap to switch half, lacks flexility, nice beat jump, ends with a stuck gainer pike.

Pennese (Ark): FHS double full, nicely done, 1.5 to front layout, soft knees in the air but gets a solid landing, Fantastic double back to end.

Hickey (Ark): Solid double pike to start. Could use a bit more amplitude on the leaps. RO 1.5 to front lay, under rotates but makes it around. High double back to finish.

Magnelli (Kentucky): Bhs loso loso, fantastic, Gorgeous flexibility on leaps. A significantt improvement in confidence from her freshman year. Large bend at the hips on her dismount.

Haigis (Kentucky): Bhs loso, falls right off the beam, beat jump to sheep jump, balance check, cat leap to front aerial, solid, stuck ro 1.5 dismount with a bend at the chest. She fought through the rest of it.

Lovett (Ark): Beautiful form on her dlo. Slightly under rotates it and has to take a hop forward. Sky high double tuck. Changes her leap sequence to a switch half popa. nicely done. Finishes with a front layout front full. Best routine for Arkansas so far tonight.

Sarah Shaffer was scratched from Floor for Arkansas.

Kentucky will take the win tonight, but will end the meet subpar of 197.000. The team avoided any major issues, but struggled to have the polish on its performances throughout the evening. Raena Worley continued her excellent season with a win in the all-around and 9.900 plus scores on vault, bars and floor. Arkansas continued to struggle on bars and beam having to count a fall on each event. The absence of top all around competitor Kennedy Hambrick was greatly felt by the program. Both teams will need to improve upon tonight to have a chance at getting into the evening session at SEC championships and a solid placement at regional competition 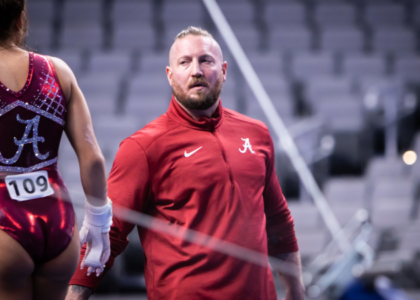