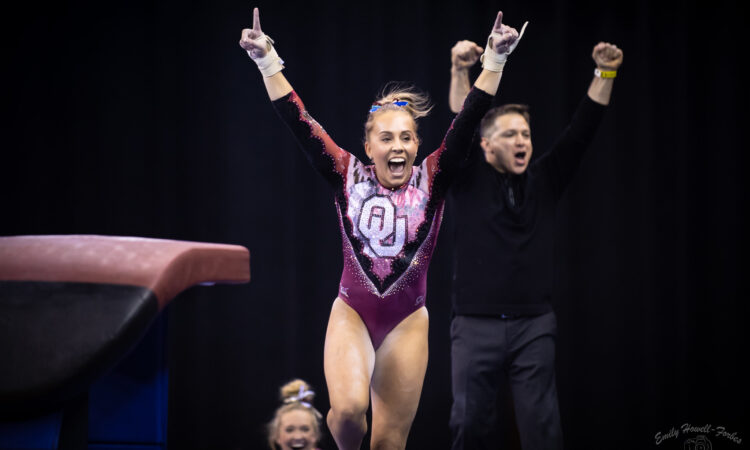 January is a fascinating month in the college gymnastics universe because we get to see each team as an unfinished project. Any smart coach realizes that it’s how the team performs in March and April that counts, so many of the top teams enter the season with a lot still to figure out. We’re breaking down the biggest problem that each team will be hoping to leave in January.

It’s all happening for Missouri, which promises to be a team with a genuine chance to make nationals in 2022, but the Tigers had to skip their week two meet due to COVID protocols and had massive personnel differences between week one and week three. While we don’t know that all of the absences were COVID-related, it’s a fair guess given the context. Stabilizing the personnel and lineups, particularly where potential stars like Amari Celestine are concerned, might be the step Missouri needs to get over the 197 line and establish itself in the top half of the SEC.

Alabama’s struggles with vault and floor are hardly new, but it was reasonable to hope that an influx of routines from a workhorse freshman class and Makarri Doggette and Mati Waligora’s returns to full strength. No such luck. At this point, given the level of talent available and the consistency of the issues over the course of the years, it’s hard to imagine anything but mismanagement is at fault here.

No. 8 Auburn: Settling the Freshmen in

In all honesty, Auburn can’t complain very much at all about its standing after finishing the regular season at No. 15 last year and then being unable to contend at regionals at all. Still, while Sophia Groth hit the ground running, Sara Hubbard and Sunisa Lee have more to give and will be well worth the wait once they reach their full potential.

No. 7 Minnesota: The First Three Routines

There’s no arguing with the extraordinary quality and consistency Lexy Ramler, Ona Loper and Mya Hooten produce at Minnesota, but throughout the Ramler/Loper era the Gophers have struggled to find stability and quality in their early lineup routines. The talent is there among the underclassmen, but developing it has been a slow process.

No. 6 LSU: Manage the Injuries

LSU has only competed once, so it’s hard to gauge the extent of the issue here. But between Sami Durante’s hand, Haleigh Bryant’s foot, Kiya Johnson’s whole situation and whatever kept Aleah Finnegan and Tori Tatum out of lineups in week one, there’s a lot up in the air in Baton Rouge. With luck most of this stuff will resolve itself pretty quickly (Finnegan was expected back in lineups this week before the meet was canceled and Durante performed at the practice meet Friday), but either way it’s a lot of moving parts for the Tiger coaches to manage.

No. 5 Denver: Finding Some Vault Difficulty

Denver, like Auburn, really shouldn’t be sweating its ranking right now, but if we’re forced to pick out a weakness, it’s certainly vault. The three 10.0 SV vaults Denver boasts is substantially less than most of its peers in the rankings, and of those three, only Lynnzee Brown’s is particularly consistent.

No. 4 Florida: Toning Down the Chaos

No one’s questioning Florida’s talent level, and it’s no knock against the Gators not to reach 198 in January since it literally doesn’t matter until March. Still, some of the decisions that have been made by the Gators this year in terms of lineups and routine construction have been so perplexing. Having the most talented roster in NCAA gymnastics history doesn’t mean you don’t have to try.

No. 3 Oklahoma: Finding the VT/FX A Team

The Sooners’ early season beam jitters seem to have worked themselves out and Danae Fletcher’s return has helped, but Oklahoma has a lot of work to do to reach its promised six 10.0 SV vaults and a competitive floor lineup. Freshmen Danielle Sievers and Moorea Linker ought to be leg-event stars, Audrey Lynn is just around the corner and… we haven’t given up hoping for Olivia Trautman yet… so it’s just a matter of when these routines materialize.

Bars was Utah’s weakest event in 2021, and the addition of three freshmen to the lineup hasn’t fixed all the issues. Subbing Alexia Burch in for Alani Sabado proved to be a good move, but Cristal Isa’s imprecise, archy casts, visible form from Amelie Morgan, and cast handstand issues toward the end of Grace McCallum and Sage Thompson’s long routines add up to a lineup that peaks quite a bit lower than other top teams. Some of these issues are technical, but a lot are strategic and could plausibly be fixed with different composition choices.

As great as all seven Michigan gymnasts have been this season, they’re still just seven gymnasts. The only freshman routine that exists, as far as we can tell, is a Jacey Vore bars exhibition. A lot is riding on the Michigan A-team’s ability to avoid COVID… or tripping on the street and tweaking an ankle… for the rest of the season because the margins are so very thin.

READ THIS NEXT: For Michigan, Success on Vault Lies in the Details