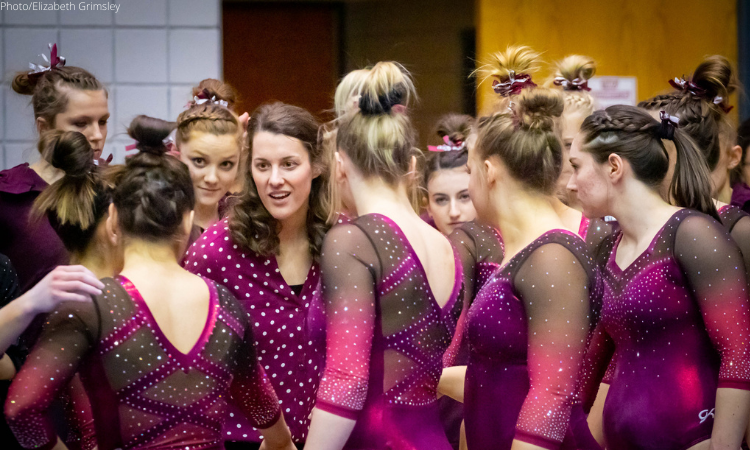 While not as much in the spotlight, the USAG and NCGA national championships are just as exciting as NCAA weekend during the postseason. Plus, with no NCGA championship meet held and half the USAG field sitting out 2021, these teams are absolutely raring to go.

Elizabeth: I sometimes forget about the teams not in the MIC that compete at USAG nationals. This year I was fully prepared to pick Penn, but it seems like the Quakers may not be attending the meet again in 2022? For reasons still unknown (we’re working on trying to figure it out, trust me). If that’s the case, I’ll have to go with Texas Woman’s. It looks good so far this preseason.

Carolyn: I’m gonna say Texas Woman’s given the recent coaching changes at Lindenwood. I’m not saying that Catelyn Orel and her new all-female squad won’t be amazing (because they totally will be, and I am excited to watch them this season), but I instead feel like with that Lindenwood coaching shuffle this might be TWU’s year to pull through.

Emily M: Oooh this is tough. You know, Rebecca has been in my ear, too. Err, DMs rather, with clip after clip of Penn looking spot on. I’m joining Elizabeth and going with the Ivy.

Brandis: I’m going to copy Carolyn on this one and go with Texas Woman’s. It has been one of the premier USAG teams for quite some time, and with the changes at Lindenwood it gives the Pioneers a great opportunity to finish on top.

Allison: I’m fairly stuck between Penn and Texas Woman’s. Anytime Penn posts a training update video, I stop everything I’m doing to watch at least three or four times. Texas Woman’s has the history of doing fairly well, though. After a quick 25 coin flips, I’m going with Penn.

Rebecca: Everyone knows I love the Quakers, but I think that unfortunately they’ll be skipping this meet again in 2022. My guess is that even without Dahlia Solorzano-Caruso, we’ll see SEMO repeat as USAG champion.

Talitha: Ahhh this is hard, but I’m going to say Penn, too. That team really has something extra this year.

Katie W: Penn has been upping its recruiting game in recent years, and that’s certainly going to take the spotlight in 2022.

Tara: Traditionally, I’d go Lindenwood, but with Jen Llewellyn’s departure to Washington and a new coaching staff, I’m not sure about the Lions at the moment. Penn is another contender, but I’ll believe them competing at this meet when I see it. I’m going to have to go with Texas Woman’s on this one.

Elizabeth: I’ll admit that I’m not as knowledgeable about the NCGA teams as some of the other divisions in the sport, but from what I’ve gathered from Tavia and Allison this fall, I’m going to predict UW-La Crosse takes the title in 2022.

Carolyn: I am so inexperienced in knowledge when it comes to NCGA, but based on last year’s abbreviated schedule, I will go with UW-La Crosse.

Emily M: I just can’t rule out UW-Whitewater. It’s always a mistake. Plus, the Warhawks kept a lot of their most productive routines.

Brandis: Mirroring what Emily M said, after looking at who’s bringing what routines back, I’m going to have to go with UW-Whitewater as my preseason NCGA title pick.

Allison: Oh, no thanks on this question. Bands write songs about this battle between head versus heart. I’m always surprised by any UW team, as they always seem to pop up and peak at exactly the right time. I want Brockport to come back swinging, but my head is going UW-Whitewater. My heart still goes Brockport, though. Regardless, it’ll be a great meet with the 2018 and 2019 champions, hopefully, squaring off.

Rebecca: UW-La Crosse recruiting has been so exciting the past few years, and I’m guessing depth will win out and the Eagles will be back on top in 2022

Talitha: I’m not that knowledgeable about the NCGA either, but based on potential and recent results, I’m going with UW-La Crosse.

Tara: I’m also not the most knowledgeable about the NCGA teams, but from what I’ve gathered I’m going to give it to UW-La Crosse, though I could see Oshkosh, Whitewater or even Brockport sneaking in and taking the title.