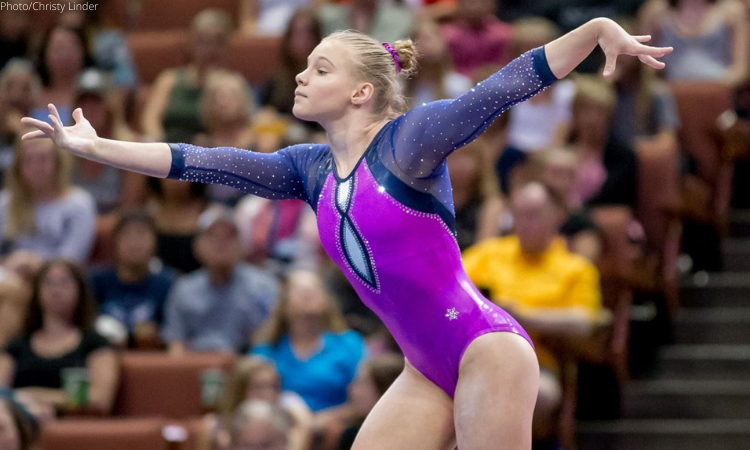 There’s less than three weeks until the start of the 2022 season, and it wouldn’t be a new year without some predictions! We’ll be answering one pressing question over the course of 10 days as we gear up for the first meet on January 5.

Thanks to Olympic deferrals, the 2022 freshman class is arguably the best NCAA gym has ever seen. But which gymnast will reign supreme and kick her college career off on the highest note?

Elizabeth: I set this article for CGN and even I’m feeling personally victimized by myself for doing so. How am I supposed to choose between the likes of Leanne Wong, Jade Carey, Grace McCallum, Jordan Chiles, Sunisa Lee… Even that long list doesn’t name every newcomer who could dominate the NCAA in 2022. But per the rules, I have to choose, and I’m going with Sloane Blakely. She’s a little underrated compared to the top elite names, but she’s strong on every event. The only thing holding her back will be whether she can make all four Gator lineups.

Carolyn: This was a hard one, but after looking at each team’s freshmen class, I have to go with Jade Carey. After seeing her potential routines at an Oregon State exhibition, I am confident that she will be a steady contributor to the team with her experience and consistency in her back pocket.

Emily M: Stop. Are you kidding me? This is an impossible question. There are so many possible answers. Kara Eaker, Leanne Wong, Jordan Bowers, Jade Carey, Sloane Blakley, Grace McCallum and on and on and on. I think Elizabeth will force me to choose, so Leanne Wong. Final answer.

Brandis: First, I’d like to echo all of my fellow editors’ comments about how hard of a question this is. But, if I can only choose one, I’m going with Jade Carey. Not only did she look good in the preseason intrasquad, but Carey shouldn’t have any problems making lineups at Oregon State on any event, a problem I can see many of the top freshmen at the top ranked schools running into.

Katherine: It’s also Jade Carey for me. Brandis’s observation that she will undoubtedly crack every lineup is a great point, and preseason clips have shown she’s had no difficulty transitioning from elite to NCAA.

Allison: I have to go with Emily on this, I think Leanne Wong is absolutely going to shine this year. It might be that I’m projecting another certain GAGE gymnast’s form into the equation here, but her grace, her twisting—it puts my heart at ease anytime she’s competing.

Rebecca: I have to stand by the recruiting team’s work here and pick No. 1 recruit Leanne Wong.

Ryan: I want to say Riley McCusker, but I know that’s 95% based on feelings. So I’m going to have to go with Grace McCallum. She doesn’t have a weak event and was pretty consistent during her elite career. I think once she competes slightly less difficult routines that can showcase her form, she’s going to shine.

Tara: I’m going to go with Jade Carey. Beyond her stellar vault and floor, I think she’s going to be a valuable all arounder for the Beavers. Bars and beam are her “weak” events, but they won’t be weak in college. Where some of her fellow top freshmen are at schools with more depth and may not need to be relied on as all arounders, I can see her leading the way for Oregon State on all four.

Talitha: OK, this is super hard… There are so many Olympians I could choose from, but you know what? I’m going to say Jordan Bowers. She’s looked fantastic in training and in the most recent intrasquad, and KJ Kindler is known for bringing out the best in her athletes.

Katie W: I’m so torn on this question. There are just so many options from Olympians to former elites and level 10 stars. I think my pick just may have to be Jade Carey. She looked phenomenal at the team’s intrasquad and is pretty much a guarantee all arounder for Oregon State, whereas other star freshman have a bit more competition to make lineups.

READ THIS NEXT: Michigan Nabs No. 1 in 2022 Preseason Coaches Poll With 37 First-Place Votes