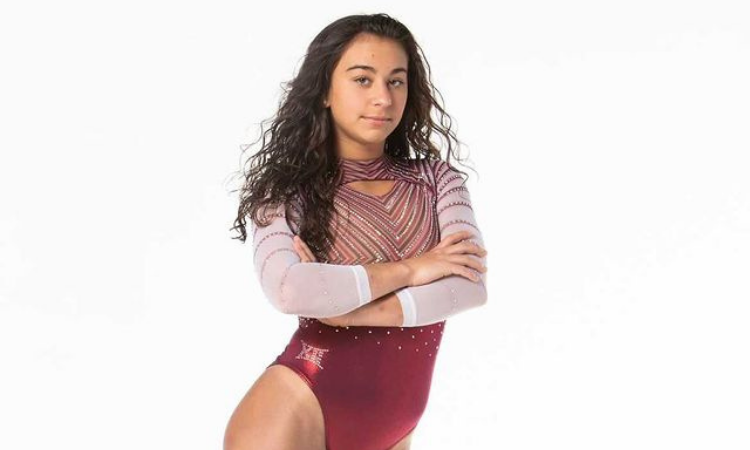 “I am not saying that every day in the gym was always perfect or that every meet went as planned,” senior elite Addison Fatta said, reflecting on her career thus far, “but I can honestly say that I don’t feel like I had major struggles or setbacks.”

The affirmation comes at the end of an extraordinary year for Fatta, a 4-star recruit in the class of 2023. After an excellent beginning to her season, which included a seventh-place finish in the all around at the Winter Classic, in June she was 16th at the U.S. championships, notching her qualification to the Olympic Trials as a first-year senior—the “highlight” of her career so far. After a short break due to injury, last month she ended her 2021 in style with a verbal commitment to Oklahoma on a full-ride scholarship for the 2024 season.

At the Olympic Trials in June, Fatta had one of the best meets of her career. She hit all eight of her routines, finished 11th in the all around and, most importantly, had the time of her life. “Competing at the Olympic Trials was almost indescribable … That was the most fun I have ever had competing and a lifelong dream come true,” she recalled. “Competing in front of 22,000 fans was so exhilarating. The energy from the crowd was so positive that it lifted you up while you were competing.”

After Trials, Fatta continued to work hard in the gym, aiming at the world championships in October. However, at the last minute she had to withdraw from world trials due to three stress fractures on her shin. Although the withdrawal left her momentarily devastated, Fatta managed to stay positive. “I soon realized this was just a tiny setback and I would heal quickly,” she explained. “I did seven weeks of no impact, lots of strength and lots of bars. I am currently back in action and so excited to be doing 100% of gymnastics again.”

She’s currently training in the hope of being selected for an international assignment next year and, hopefully, having a second shot at the world championships. “And who knows, maybe I’ll compete at the Olympic Trials one more time?” she teased.

Once her elite career draws to a close, Fatta will join the Oklahoma Sooners, the team that stood out the most to her during her official visits. “Although all my five trips were amazing, as soon as I stepped on the University of Oklahoma campus, I just knew this is where I wanted to be,” she explained. “It felt like home.”

In Norman, she already made “new lifelong friends” and was in awe with the coaching staff. “They are so fun and welcoming,” she said. “They want to help you be the best person you can be.”

Once there, she hopes to contribute to another national title and to keep competing her unique two and a half twist to double tuck pass on floor. “I love competing and training this pass. I think it is a unique combination,” Fatta explained.

For now, though, she just wants “to relax and enjoy every moment of the journey,” exactly as she did when she surprised her clubmates at Prestige with an original commitment-reveal party.

“It was very hard to keep it a secret from all of my friends,” she explained, remembering the moment she ran into the main hall of her gym sporting an Oklahoma T-shirt and flag, welcomed by her friends’ loud cheers. “But I knew I wanted to do a fun reveal where they all would be surprised. I am so glad I kept it a secret because that will be a memory I will never forget.”

READ THIS NEXT: Hannah Scheible Takes the Recruiting Journey to a New Level With Public Account of Her Commitment to Oklahoma