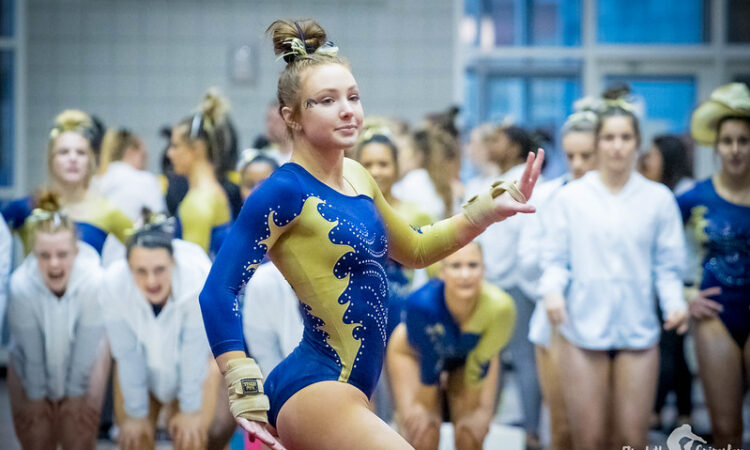 On Monday afternoon, all eyes in college gymnastics were on the selection show for this year’s postseason. While we were able to project the seeded teams (i.e. the top 16 in the final NQS rankings) the distribution of the remaining squads, plus the individuals, were a surprise. We’re breaking down who has the easiest—and the scariest—roads through the regionals weekend.

The NCAA lulled us into a false sense of security in 2019 by very sensibly sending teams ranked between 29 and 36 into the eight play-in regional spots. No more! No. 26 N.C. State was sent to a play-in regional while No. 29 Kent State gets to skip straight to the second day of competition. No, we don’t know why. No, this was not in any way a good call on the part of the NCAA. No, this wasn’t an unavoidable consequence of some good-faith effort to send teams to regionals geographically close to them. (Seriously, Temple is going to Salt Lake City, and Oregon State to Athens.) It’s just incomprehensible, and if you’re N.C. State—a team with a very high ceiling and a nontrivial chance of being a round two spoiler if a seeded team slips—you’re pretty annoyed right now. On the other hand, Kent State has a near-zero chance of upsetting in its round two regional—it’s paired with Michigan and UCLA—but it should still be a far more exciting postseason experience than the Golden Flashes are used to.

These two, ranked No. 27 and No. 28, should just be happy that they avoided N.C. State’s bizarre fate since they rank below the Wolfpack. It’s still an uphill battle, but that’s one major bullet dodged.

Stanford sophomore Chloe Widner was projected to advance to regionals as an all arounder but was bumped out due to the play-in switcheroo. Remember that play-in teams are part of the individual qualification system. Since Kent State had no all arounders in qualifying position but N.C. State’s Emily Shepard is ranked in the top 30, Widner, the final projected qualifier, was dropped off the end of the list. Robyn Kelley from New Hampshire also lost a qualifying spot on vault this way, but she’ll still be able to attend regionals for beam.

Illinois, the lowest-ranked seeded team, theoretically could expect to be under fire in its round two regional. Given that, its draw looks extremely soft. The Illini will face off against Central Michigan, whose season high is lower than Illinois’ NQS by four tenths, and the winner of the N.C. State-Western Michigan play-in. Under normal circumstances the Wolfpack would look like a potential spoiler here, but it’ll be tired after having to win an (unjustifiable) play-in the night before and likely not in top shape.

Denver’s round two regional is the one we all gasped at when the draw came out. The Pioneers will compete against Minnesota (which, honestly, isn’t entirely safe here itself) as well as Georgia and Oregon State. Denver has cracked 197 just four times this year, and a team score in the mid-196 range is catchable by the feisty Beavers. Georgia is a wildcard, but it’ll be hungry and well-rested after missing the conference championship, able to capitalize on potentially generous scores at home.

Winner: UCLA (up to a point)

The Bruins will pay for their regular season beam agony in the form of an almost impossible round three regional versus Cal and Michigan, but they should feel extremely good about their chances in round two versus Kent State and the winner of a play-in between Penn State and West Virginia. It’s a very low-pressure environment that should allow the Bruins to save their best for when it’s really needed.

It’s been a fantastic year for the MRGC teams, and I don’t envy Arizona State’s position of having to get past two of them to advance through round two. Recall that Boise State’s conference championships performance was around four tenths better than the Sun Devils’. Southern Utah peaked in midseason and has struggled to regain its February form as a series of short-term absences scrambled its lineups. Two weeks of recovery time could be big for the Thunderbirds.

Arkansas’ round two regional was the other seriously gasp-worthy one. The Razorbacks have to hold off two of 2021’s hottest prospects in Iowa and Iowa State. Plus, Arkansas is a team that has struggled on the road this year, with three of its top scores coming at home. The Razorbacks also turned in a humbling season low last weekend at the SEC championship. Whether that will leave them daunted or galvanized remains to be seen.