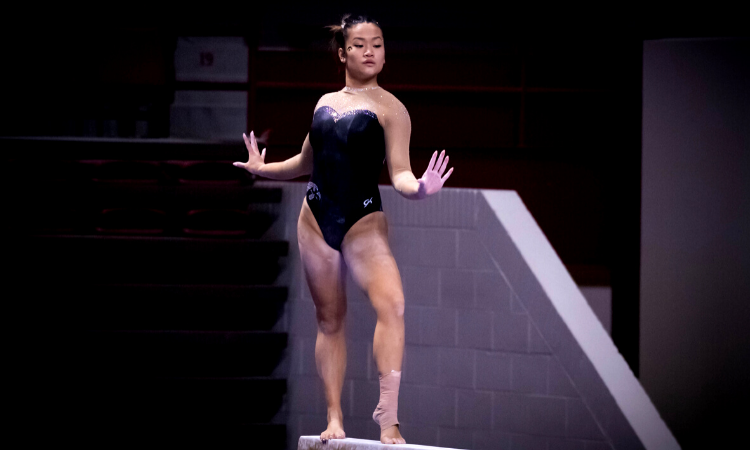 Thanks to the pandemic and teams’ ability to compete in fewer meets than in a typical season, NQS was tweaked slightly for 2021. This year, only the top four scores—two of which must be away—figure into the average. Normally, the top six scores are taken—three of which must be away—and the high is dropped before averaging the remaining five.

However, we thought it would be fun to calculate each team’s 2021 NQS using the standard formula to see who is benefiting from the change and who might have liked to stick to counting the top six scores.

Note that George Washington, San Jose State, Stanford, Michigan State and William & Mary, as well as the NCGA teams, do not have six scores from this season and won’t be figured into this article.

We’ll start off by taking a look at the top 16 teams plus the unseeded round two qualifiers. There are a couple interesting changes to note. While the majority of differences only resulted in a team moving up or down a single ranking position, Arizona and Illinois were particularly hurt by using the standard NQS formula. However, each team is hurt in a different way.

Arizona State had three scores of 197-plus in 2021, as well as two in the high 196s. But the Sun Devils’ final counting score was a 196.375, which kept the team’s total down. When only using four scores, they’re able to drop that low number and move up the rankings because of it.

Illinois was hurt by having to drop its high score with the old formula. The Illini scored a huge 197.575 on senior night this season, but none of its other five counting scores came close to that number. In fact, Illinois’ next highest score is nearly a point lower: 196.650.

Iowa benefits the most from expanding the formula to count six scores with the high dropped. The Hawkeyes benefit from consistency. They may not have that single huge number that would have boosted them in the four-highest-scores-count method, but the difference between the team’s season high and its sixth -counting score is just 0.375. When it comes to the standard NQS, consistency is definitely the name of the game.

This is significant because it jumps Iowa from the team’s current ranking of No. 19 all the way into regionals seeding at No. 16 while Illinois is the odd team out, dropping to No. 18. Then there’s of course Oklahoma, who takes sole possession of No. 1 when using the standard NQS, mainly due to having one more high 197 in its top six than Florida. The Sooners also competed in three more meets than the Gators, which increases their advantage when counting six meets instead of four, as they had more opportunities to drop lower scores.

We start to see a lot more movement as we get closer to the regionals cutoff at No. 36. A lot of teams that made regionals this season would not have under standard NQS and vise versa. When calculating with six scores, Ball State and Nebraska slide into the top 36 and would qualify for regionals while Arizona and Western Michigan fall out.

For Arizona, there’s about a 0.400 gap between its fourth-highest and fifth-highest scores, meaning that while it can drop the less attractive numbers in 2021’s version of the NQS formula, it’s hurt by having to count those lower numbers when using the standard calculation. The same is true for Western Michigan but even more amplified. The Broncos have a pretty big drop off after their fourth-highest score, going from 195.425 all the way down to 194.600 as their next highest. Using six scores kills their total.

Again, like Iowa, Nebraska and Ball State simple benefit from being consistent, as all six of their scores, even their season highs, fit in a relatively small range. This doesn’t help the teams much when using 2021’s methods, but it sets them up for potential success in future seasons when things go back to normal.

READ THIS NEXT: Data Deep Dive: New NQS Rules Applied to the 2020 Season