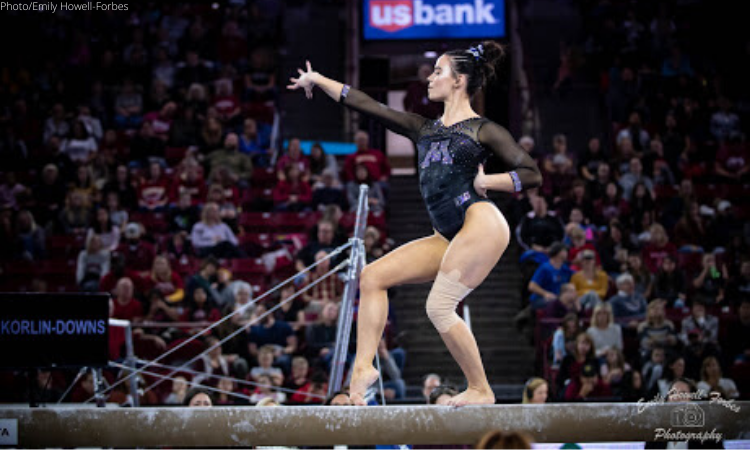 Things are just starting to heat up as we head into the third week of the regular season. With the standings still wonky, it’s anyone’s time to move up the rankings. One miss—or one excellent performance—and things can shuffle dramatically.

Why You Should Cancel Plans For It: The Crimson Tide lost a close one at Auburn last week, but its overall confident performance boded well for things to come. It’ll go up against an Oklahoma team that, on paper, is just as dominant as last year, but seems to be lacking depth in the earlier halves of the lineups.

What We’re Watching: Alabama junior Lexi Graber had a fall on beam last week that seemed to aggravate a pre-existing ankle injury; she could be limited this week. Her teammate, expected all arounder Makarri Doggette, did every event but vault last week but is expected to add that event here.

What Else You Should Know Before Tuning In: It’s the second meet of the season to be on ESPN2! It’s not the big ESPN just yet, but this meet should be more accessible to the general public than those on the more premium SEC+ or even ESPNU.

Why You Should Cancel Plans For It: It’s been a minute since Illinois was ranked above Michigan. We know, we know, we’re only two weeks in and Michigan started out on a flukey meet. That said, Illinois definitely has the momentum here. Another off meet for the Wolverines, and the Illini could take it. We’re not saying it’s likely, but it’s certainly possible. There’s a lot of conference dynamics talk at stake here for a Michigan team that hasn’t lost the Big Ten crown in recent memory. Illinois last won the title in 1990. The same year Big Ten editor Emily M was born. Indeed.

What We’re Watching: You know by now that you need to watch Mia Takekawa on beam. Keep a close eye on Natalie Wojcik there, too. It’s hard to imagine her falling two weeks in a row. We might see Abby Heiskell—who exhibitioned for a team-best 9.900 last week—take over Lauren Farley’s bars lineup spot. Expect Michigan to get out strong on bars and vault (where it is No. 1); if Illinois is going to make a push, it’ll be in the third rotation.

What Else You Should Know Before Tuning In: Anne Maxim fell during bars warming up last week and was in an arm brace during the meet. If she competes, it will be a surprise.

Why You Should Cancel Plans For It: Auburn upset LSU at this meet last year, and while this year’s edition is in baton Rouge, the precedent is set and anything can happen. This year, completely unrelatedly, Auburn is hot off an upset of Alabama. Need we say more?

What We’re Watching: LSU had a decent road opener last week, but it was at Georgia where scores are known to be inflated. The crowd and judging in Auburn Arena could lead to more of a wakeup call for LSU. Auburn freshman Cassie Stevens had a strong debut in the all around last week, so add her to what should be a tight contest for that crown.

What Else You Should Know Before Tuning In: Auburn floor leadoff Emma Slappey had a short landing last week, and the rest of her routine wasn’t quite the same (she finished with just a layout). Don’t be surprised if Auburn reworks that lineup this week. Also, LSU junior Christina Desiderio is working through a groin injury and could continue to be limited.

Why You Should See the Error of Your Ways: These teams’ rankings may be all over the place, but this will likely be a pretty close meet. Host Kentucky is the favorite, but each of the visiting teams has the chance to get close to an imperfect Wildcats performance. And, given that none of them have quite gotten hot yet, it should an interesting battle for the rest of the standings as well.

Need More Proof? UNC freshman Hallie Thompson recently suffered a season-ending ACL tear, but her classmate Elizabeth Culton is making waves as the reigning EAGL Freshman of the Week. Watch for her all around contribution here tonight. N.C. State also has some impressive freshmen to watch in Chloe Negrete and Alexis Ortega; both are vault standouts and should do at least one other event tonight.

Why You Should See the Error of Your Ways: Southern Utah hasn’t gotten off to the best start, but the potential for success is there. Between Karley McClain, Shylen Murakami, and others, there’s lots of exciting routines to watch. New Hampshire is an underrated team that gets less attention than deserved. It, too, hasn’t had a great start to the season, but there’s plenty to watch for. Kylie Gorgenyi is one of the better freshmen in her class and Lauren Diggan’s bars never fail to disappoint.

Need More Proof? Murakami stands out on bars and beam for the Thunderbirds. Her teammate, Rachel Smith, performs a unique 10.0 start value vault in a Yurchenko full-on pike and has scored well this season. Also, Stephanie Tervort is one to watch on bars. She has one of the best Giengers in the NCAA and often goes unnoticed. Again, Diggan is another bars routine to watch for the Wildcats, as is Gorgenyi on vault and Hailey Lui on beam.

No. 14 Central Michigan at No. 28 Eastern Michigan

Why You Should See the Error of Your Ways: Two words for you: Hannah DeMers. The Central Michigan freshman kicked off her collegiate career by winning event titles on uneven bars (9.900) and vault (9.850) in the Chippewas’ opening meet against Illinois State at Michigan State this past weekend. In addition to that, Central Michigan and Eastern Michigan are currently first and second in the MAC, so this conference showdown should be a good one.

Need More Proof? In addition to DeMers and her sky-high Tkachev, Central Michigan senior Denelle Pedrick is one of only four gymnasts competing a double twisting Yurchenko on vault, and she does a triple full on floor that is can’t-miss. Eastern Michigan junior Courtney Bezold is a regional qualifier on bars and has a beautiful routine, and the battle for the all around title should be tight between DeMers, Pedrick, Eagles junior Jada Rondeau and senior Emili Dobronics (assuming she competes bars, which she did not last week).

Why You Should See the Error of Your Ways: These are two relatively even-matched teams. Both the Broncos and the Huskies fared similarly in their opening meets, with definite high points yet also some struggles. Washington scored a 49.1 on vault at Michigan, a total that is higher than all but one of its meets last season on the event. Also watch to see the impact of a sans-Courtney McGregor Boise State team, as the standout senior ruptured her Achilles on vault at UCLA. The Broncos only fielded five on bars to begin with, and that was before she went down.

Need More Proof? Emily Muhlenhaupt has a gorgeous bars set for the Broncos; she reached near-perfection last season. The junior also made her collegiate beam debut at UCLA, scoring an impressive 9.875. Freshman Adriana Popp is also one to watch on beam. Washington’s all arounder Evanni Roberson has emerged as a rock for the Huskies and consistently performs well on every event; she won the all around at Michigan. Madison Copiak is stellar on bars, too.

Why You Should Clear Space on Your DVR: Despite some shining moments, Missouri is still waiting for its breakout performance; that might come in this home match-up against the Gators. Florida, on the other hand, had the definition of a breakout performance to open its season last week; it will look to get a similar score on the road tonight.

What to Look for If you Missed It: Both teams’ beam rotations will be must-watch, with Florida earning the highest opening total of any team on the event last week and Tiger Helen Hu going 9.950. We’ve heard there’s been a trend of unexpected 10.0s on beam lately…

Why You Should Clear Space on Your DVR: This is a pretty random match-up, but it’s sure to be an enjoyable one all the same. Jordyn Wieber’s first home meet is expected to be memorable after a lackluster team debut at Florida.

What to Look for If you Missed It: Check to see what contributions Sarah Shaffer and Hailey Garner make for Arkansas after being limited in the first week. Also, like Florida at Missouri, there’s beam performances here that you won’t want to miss. Sophia Carter and Alexis Vasquez in one meet seems like too much to ask, but it’s happening. Both have scored 9.975 or higher in the past.

Why You Should Clear Space on Your DVR: While traditionally this wouldn’t be a close meet, the way BYU has been on the rise lately could mean that a home meet advantage could help propel the Cougars over the Bruins. It’s truly not impossible if Shannon Evans can get back into lineups in peak form for BYU, but if UCLA is able to figure out beam and hit the other three events like it has been, expect an easy UCLA victory.

What to Look for If you Missed It: Obviously check to see how many 10s Kyla Ross scores, but also watch for Margzetta Frazier who has become an exciting second all arounder for the Bruins. For BYU, the Miner sisters are the ones to watch, Abbey in the all around and Sadie on vault and floor. Maia Fishwick on bars and Autumn DeHarde on the other three events are standout gymnasts to keep an eye on for from Utah State.

Why You Should Clear Space on Your DVR: These two teams last met to open the season in 2019, and now they’re meeting on a double meet weekend. Plus, Arkansas assistant coach Chris Brooks returns to his alma mater and former place of employment.

What to Look for If you Missed It: Will Olivia Trautman return to OU lineups for this meet after sitting out with a fractured heel? And if so, will she do the all around? Watch her contributions throughout the weekend. Also, Maggie Nichols needs three 10.0s to tie Kyla Ross’s current career total, which is the fifth most of all time. It’s an OU home meet, so now seems as good a time as any to get started on closing that gap.