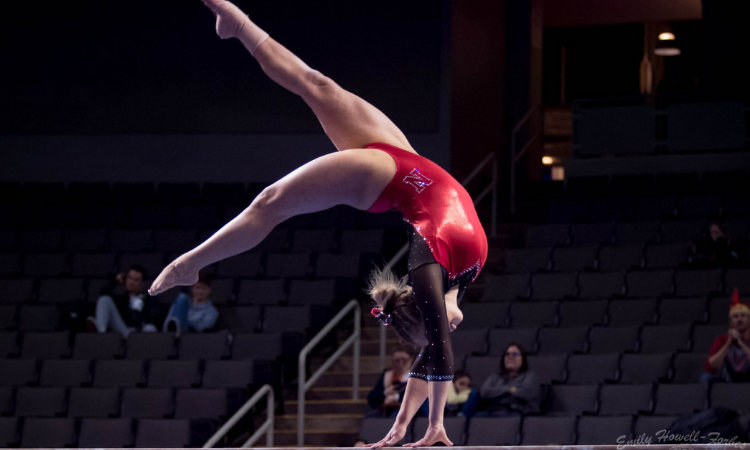 Welcome to the first Monday night meet of the 2020 season! The Nebraska Cornhuskers are facing the BYU Cougars for the first time since March 2000. (Fun Fact: Nebraska head coach Heather Brink scored a perfect 10 at that meet!)

This should be a pretty interesting—and evenly matched—competition: Nebraska arguably has higher scoring potential, but BYU is a team on the rise with a deep roster. The Huskers lost several standouts, including Sienna Crouse and Megan Schweihofer, and will depend on contributions from every team member to improve on last season’s results. The Cougars, meanwhile, have plenty of depth but will have to work on consistency to break into the top 20 this season.

The meet is Monday, January 6 at 7:30 pm EST, and will be broadcast on BYU TV (if you need help figuring out how to tune in, CGN has you covered). Live scores will be available here.

Note: You will need to register and set up a free account in order to watch BYU TV.

Sounds like Evans and Zhong are out for BYU. Also, no Roby or De Jesus in the Huskers’ bars lineup (no word on why).

On a brighter note, fabulous new leos from both teams!

Pitou (BYU): Yikes, she completely missed her right hand (like, halfway off the table) and wiped out. Hope she’s okay…. 8.975

Thayler (Nebraska): Good Maloney to Pak. Hits the last handstand but goes sideways on her pirouette. Manages to work through it to a solid double tuck and an almost stick. Big hug from Brink! 9.700

Mathews (BYU): Big Yurchenko half with a large step forward. 9.650

Bennett (BYU): Cool full-on tuck off. Looks like she was still twisting into the board, but overall very powerful. 9.725

Quinn (Nebraska): Short on her first handstand, ugh… Wipes out on her Geinger. Rough bail, short final handstand. Okay double lay with a big hop back. 8.750

Stainton (BYU): Yurchenko tucked 1.5, cool variation. Looked a little awkward, but that could just be because I’m not used to seeing those, haha! 9.725

Pringer (Nebraska): Stepouts on the low bar and a Shaposh, nice. Some leg form on her bail. Gets hung up on her full pirouette, but works through to a great double tuck. 9.725

Apologies, the scores have stopped coming in. We’ll update asap!

BYU has a really cool variety of vaults and good difficulty, but don’t have the landings yet. They did a great job of bouncing back after Pitou’s fall. Nebraska put up a respectable rotation on bars even with the scant lineup. Really impressed with their ability to push through most of the hangups and control their landings.

Hassel (Nebraska): Yurchenko full with a botched block and lots of form. Way to hang on. 9.550

A. Miner (BYU): Pretty straddled Jaeger to overshoot. Didn’t get a ton of height on her double lay, but stuck the landing. 9.800

Verceles Carr (Nebraska): Poweful Yurchenko one and a half with a ton of distance. Soft legs throughout, but just a small hop forward. Good. 9.800

Beeston (BYU): Free hip to Geinger, nice. Bail not to handstand, but fine. Nice handstands throughout. Piked double lay, but she drilled the landing. 9.825

Dujakovich (Nebraska): HUGE Yurchenko one and a half, crazy distance and a very small hop. 9.825

Cyrenne (BYU): Toe circles to handstand stepouts. Leg sep on the Shaposh. Bail to handstand, a little off. Shortish handstands throughout. Double layout with a big step forward. Not her best, but okay. 9.725 feels a little high.

Quinn (Nebraska): Again, misses her hand on the block and sits her Yurchenko one and a half. Starting to wonder if there’s something going on with the vault table. 9.200

Alvarado (BUI): Maloney to Pak, good body position on both. Pretty double lay in the air, but her legs buckled on the landing. 9.700

Houchin (Nebraska): Enormous Yurchenko one and a half, tiniest hop forward. Gorgeous form in the air. 9.850 seems low.

Curtis (Nebraska): Strong Yurchenko full. Piked down seemed unnecessary, she had a ton of height. Nailed the landing. 9.750

BYU looked really strong on bars, breaking 49.000 (that many sticks this early bodes well). Nebraska had some hiccups on vault, mostly from missed blocks. Houchin looks as great as ever. Don’t think we’ll be seeing six 10.0s any time soon, but there is potential for this to be a solid event for them.

Pearson (BYU): Some form on her aerial to split, didn’t quite hit all her positions. Bhs loso with a lot of legs; she looks nervous, but is pushing through. Several hip checks throughout. Slow connection between jumps, but should be credited. Round-off one and a half with a college stick. 9.600

Piringer (Nebraska): Good double tuck to open. One and a half to front lay, pretty. Excellent position on straddles. Double pike with chest a little low, but again, pulls out the landing. 9.825

Cyrenne (BYU): Off on her bhs loso, big check but she stays on. Switch split was nice, but didn’t quite hit the second jump. Gainer pike with a couple of hops. 9.700

Ew, they’re going to have to fuse her toe

Houchin (Nebraska): Giant two and a half, beautiful. Switch ring to split full, well done. I sneezed and missed her middle pass, but it sounded like it went well! High double pike to finish, but opens to soon and has to bound forward. 9.575, ouch.

Stainton (BYU): Front toss to bhs, some form but no wobbles. Switch split to split quarter, well done. One and a half stuck, but her legs were at least shoulder width apart… 9.825

Hassel (Nebraska): Beautiful fhs double full to open. One and a half to front lay, excellent. Love how she executes every move. Great wolf full. Fhs Rudi to a really dynamic straddle. Great routine. 9.900

S. Miner (BYU): Way off on bhs loso and has to stick her leg up, but somehow stays on. A little shaky on her full turn. Nice beat to side aerial, much more secure. Stuck round-off one and a half dismount. Way to fight through. 9.625

Quinn (Nebraska): Appreciate the BYU commentators being supportive of Nebraska. Opening double tuck a little short, but she pulls it out. Great front full to front lay. She’s getting into the choreo. Love the front aerial to her back (no worries, it’s choreographed!). Ouch, double pike to her knees. Not sure if she was overthinking things or if she ran out of steam. Tough night for her. 9.150

As expected, it’s close heading into the final rotation. Again, BYU looked pretty solid for this time of year (especially without Shannon Evans competing), but they’ll need to clean up their form on acro to consistently break 49.000. Nebraska has a lot of potential on floor, nearly cracking 49 even with Houchin’s error and no Roby or  ADJ (who’s there in a t-shirt… Still no word on why she’s sitting out). This was a strong event for them last season, and it’s shaping up to be this season as well.

Curtis (Nebraska): Wow, beautiful wolf jump to punch front. Nice bhs loso. Hip bend after full turn. Switch split to split jump, excellent. Small hop on one and a half dismount, but overall a nice start for the Huskers. 9.725

Stainton (BYU): All aboooooard! Round-off double pike with a foot OOB. One and a half to whip half to split, huge amplitude. Switch ring to switch full, a little shy. Tight double tuck landed a little low and has to take a small hop. Fun routine! 9.725

Veraceles Carr (Nebraska): Solid side aerial. Pretty full turn with hands over the head. Bhs loso solid, but soft legs. Split to split 3/4, a tad slow. College stick on her round-off one and a half, very nice. 9.775

Thaler (Nebraska): front aerial to bhs bhs, very good. Switch split to back tuck, rock solid. Round-off one and a half slightly piked and with a crossover step, but really nice routine. Heather Brink is ecstatic! 9.825

Vitkauskas (BYU): Front double full, more like a 1 and 7/8. One and a half to front lay, huge height. Nice position on straddle series. Great, dynamic Rudi to close. 9.850

Quinn (Nebraska): Front aerial to split, gorgeous. Bhs pike, and she comes off. Nice amplitude on jump series. Slight check on full turn. Lovely double full with a small hop. She has such good skills and technique, hopefully her next meet will be better. 9.150

S. Miner (BYU): Gigantic double lay to open. Kicks out of her double pike. Switch full to pike full to piked Shushanova. One and a half to front lay, really great. So. Much. Power. 9.875

Houchin (Nebraska): Gorgeous bhs loso. Floats her front aerial . Switch split to split, money. Small check on her choreo, and she laughs. Missed her foot on the double twist dismount but still puts it to her feet. 9.800

Hassel (Nebraska): Fabulous bhs loso. Front aerial, spot on. Split jump to sheep, fine. Hip check on her round-off one and a half dismount, but the feet don’t move! 9.900

BYU looks to be off and running on floor. Definitely their most solid event of the meet. Nebraska has some truly lovely beamers on this team and a great variety of skills; this should be a strong event for them.

We knew this would be a close one, and we weren’t disappointed! Despite various hiccups, both teams should be pleased with their overall performances (especially when missing so many key players).