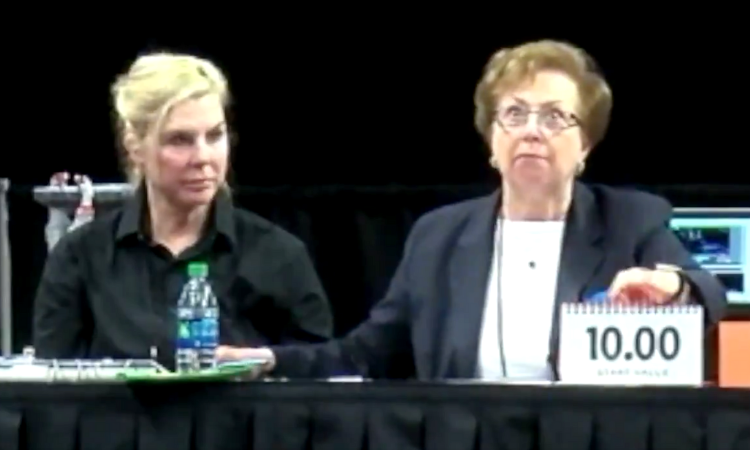 We all remember the champions of the season, the viral moments and the best leotards. But we often tend to forget some of the more unusual occurrences that make us scratch our heads, laugh out loud or take to the record books to find out when something like that happened. Take a jog down memory lane with all of this season’s greatest—and most unusual—moments.

…And her heroic effort to get back up after.

While the viralness certainly hasn’t been forgotten, just how fast it happened might be.

Tough look for our girl* there.

Yet Another Team Wore This Leo Design

West Chester, Cornell, Bridgeport and Southern Connecticut alone wore it at 2018 USAG nationals, and now SEMO. Surely there are other stock options in the GK catalogue.

They Literally Replaced the Beam at a Georgia Meet

But It Wasn’t the Only Equipment Malfunction

Mollie Korth got another go on beam. At regionals. Also at Georgia.

There was a delay to start warm ups on bars with Oklahoma at Denver week six.

Week four saw a delay in rotation two when a part of West Virginia’s vault had to be replaced before George Washington competed.

Alaska and Brown was also delayed due to a faulty bars anchor—the equipment, not the sith gymnast in the lineup.

Not sure I've ever seen anyone fall off beam the way that Emi Watterson just did. pic.twitter.com/xQsx0fJSPA

That Time Rachael Flam’s Grip Broke and Got a Redo

And literally no one understood what the rules were about it, especially Sam Peszek and the judges.

There Were Two Flash Photography Repeats in One Week

Honestly people, get it together.

And Another in Week Seven

Figure out your camera!

And Another in Week Eight

Seriously. Your picture is not going to be good from up there. Stop trying.

The Men’s Judges Had a Brain Fart—Multiple Times

Like the time they couldn’t figure out start values…on vault.

This Glorious Moment Came Into Existence

And That Time Iowa Forgot How to Vault

When the vault is lava pic.twitter.com/IUElPMvggw

Illinois’ total week nine, because you have to go over 195 at home. The Illini’s 194.975 was raised to a 195.025, but we’re not sure whose score was changed. Maryland’s score was changed because of this routine during week three. UC Davis was completely missing a score because of an alternate substitution, changing the final score after it was finally inputted during week two. SEMO’s final score was changed week two—or at least initially tweeted incorrectly. And Alaska’s final total changed between the end of the meet and when final scores were submitted. Rutgers’ final tally was raised after video review week one.

Do you get the point we’re trying to make here?

There Were No Live Scores of Video for EMU at WMU

Or for the Start of Arizona-Stanford

It’s like we don’t want to be taken seriously or something. You throw those flowers down if you want to, MyKayla.

Another angle! Looks even BETTER! We’re so impressed, guys.

Thanks to Seth Helland for sending this one to us. pic.twitter.com/ggy9gCW3aI

Sarah Finnegan Continued to Be Flawless With This Beam Save

Two Nebraska Gymnasts Had Nosebleeds at the Same Meet

Who knew Toledo was so dry.

A Commentator Talked an Entire Meet Without Her Microphone on

What viewers initially thought was a meet with no audio turned into an awkward case of technical difficulties when the video switched to the commentator moving her lips with no sound coming out.

Thanks to a historic snowstorm, two gymnasts were left behind as the whole team raced from security to the gate. Those gymnasts were given a replacement flight, but it was cancelled for weather-related reasons. So the Falcons ultimately competed down two athletes and had to debut two new vaulters to fill the gap.

Ava Caravela Got a 9.275 for This Hit Yurchenko Full

Freshman Ava Caravela with one of our best vaults of the day yesterday at Temple but unfortunately only received a 9.275 for her efforts #GoPennFight #PennPride pic.twitter.com/0yOF3vi97r

Alabama Got Nailed for Pause Deductions Week One

Then all judges forgot the rule was even a thing by the end of the season.

Only Three Judges Total Made It to SEMO at Illinois State

Much to the entertainment of viewers who got to watch one judge run back and forth between events for every single routine.

That Time We Inadvertently Live Blogged a Wrestling Match

RIC has Had Enough of DIII Judging

When you see our scores from this weekend, we didn’t have a bad meet, we had bad judging.

It was a lot. We really got a kick out of the angry coach-judge staredowns that resulted. See: Jenny Hansen.

The first time the Lions thought they won. But a score change (typo?), yes another, brought it to a tie.

We were all as shocked as the Stanford gymnasts themselves.

It Remains Nearly Impossible to Follow Some MAG Meets

There are so many with no scores, let alone video. We want to follow! Thank goodness for our friends at StickItMedia and the College Gymnastics Association.

Always a real s*it show, this year’s Winter Cup left us scratching our heads as usual, when Levi Anderson and Eddie Penev weren’t named to the national team, despite scores that should suggest they would be.

This was a memorable one. The team dealt with some major travel adversity including, but not limited to, lost luggage and three guys out (due to illness) before the competition even started, resulting in only a 12-man team. They handled it well, to say the least. #GoStanford https://t.co/D6j3582CrF