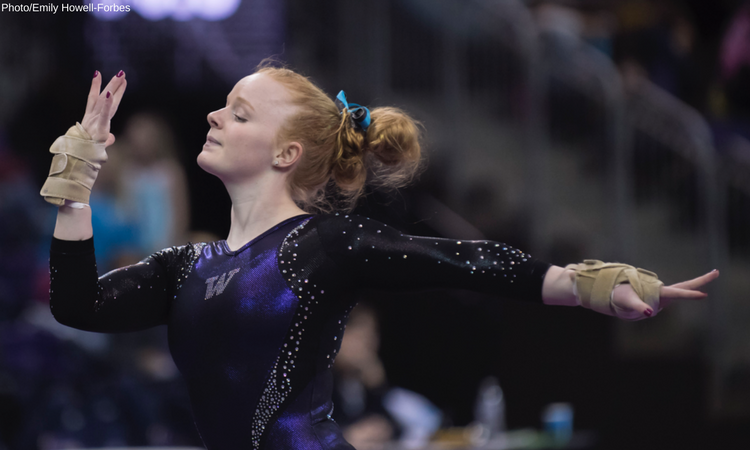 In the final weekend of the regular season, it was now or never for teams to make one of their final RQS pushes and put themselves in a position to extend their seasons at regionals. While some teams showed up, hitting season highs or—at least— what they needed to stay alive, other teams weren’t so lucky. Catch up on all the action you missed with scores, event winners, highlights and meet recaps below.

It was an emotional senior night for Alabama as it continued its streak of 197s but fell to an outstanding performance from the Oklahoma Sooners. The Tide started off strong on vault and was highlighted by Lexi Graber’s beautiful Yurchenko 1.5. She stuck the landing cold for a 9.950. Troubles for Alabama came on beam where Peyton Ernst and Graber had massive breaks and wobbles throughout, forcing the Tide to count a 9.550. The team was fortunately able to come back with the 1-2 punch of Kiana Winston and Nickie Guerrero, but it was Alabama’s floor performance that was most notable—no score went below a 9.900, and Guerrero received the event title with Winston coming in a very close second, ending the two seniors’ collegiate run at home. Oklahoma of course remained consistent as ever even without one of its top players. AJ Jackson was out of the lineups with no word yet on what exactly caused her to miss the meet, but it gave viewers a treat to see Bre Showers make her all around debut while Evy Schoepfer was able to shine on floor. Maggie Nichols notched another perfect 10 on vault and landed a huge 39.800 in the all around, continuing to mark her legacy in collegiate gymnastics.

Oklahoma rounded out its regular season the same way it started, with a strong performance—this time with big names resting and backups getting the opportunity to compete. TWU also performed well on “Senior Sunday,” tallying a respectable 48.8750 on vault to start the competition and a 48.7500 on bars after a leadoff fall. The trouble for the Pioneers came on beam and floor, where they had to count a fall on the former and two misses on the latter. Senior Mallory Moredock was the saving grace for the team, recording three scores above 9.800, including a 9.825 on vault and 9.850s on beam and floor for her sassily choreographed routines. Oklahoma set the tone from the very beginning, lead by Nicole Lehrmann’s 9.975 on bars at the arena she scored her perfect 10 in last season. Jade Degouveia, who’s been out with plantar fasciitis for most of the season, performed an exhibition on bars and also warmed up floor and was seen vaulting while the rest of the team was on beam before the competition, meaning she could work her way back into the lineups come postseason. Alex Marks also performed an exhibition on bars for a hit. Vault was the Sooners’ weakest of the night yet still a strong rotation despite a couple of unusual faces in the top six, including Stefani Catour and Evy Schoepfer. Maggie Nichols anchored the lineup with a 9.975. On floor, Jordan Draper and Schoepfer saw time in the lineup and Nichols once again anchored, this time with a perfect 10 despite doing a downgraded routine. The Sooners rounded out their night with a strong performance on beam that saw the return of Carly Woodard. Schoepfer also performed in exhibition and Brenna Dowell warmed up during touch while Ashley Hiller and Draper were seen working four inches while the rest of the team was on vault before the meet. AJ Jackson was still absent from lineups yet was in attendance, cheering for her team.

LSU finished off the regular season with a record-breaking afternoon where the Tigers tied and notched school records and earned two perfect 10s. The uneven bars continues to be a highlight for LSU, and tonight it topped its best score ever–a score that was set earlier this season this season. Myia Hambrick and Lexie Priessman earned near-perfect scores, but it was Sarah Finnegan that shined in the anchor position where she was awarded a perfect 10. Finnegan’s perfect night didn’t end there: As the Tigers moved to beam, it continued to set records, tying the school beam score, and Finnegan earned yet another perfect 10 in the anchor position. The Tigers finished up on floor, highlighted by Kennedi Edney, but unfortunately Hambrick went out of bounds and wasn’t able to score her usual high mark. Arizona was solid while up against the Tigers. The Wildcats had an impressive bar rotation, highlighted by Maddi Leydin’s beautiful lines and height. Christina Berg and Kennady Schneider impressed fans in the arena with their floor routines but couldn’t close the gap enough to chase the Tigers.

After the last few weeks on the road and two back-to-back losses, the Utes were back at home for senior night and came roaring out of the gate to score their first 198 in three years. They started out strongly on vault although the range in scoring from the two judges was a bit puzzling. The Utes continued increasing their event scores until they reached a huge 49.775 on floor in the final rotation, thanks to some senior night magic. MaKenna Merrell-Giles scored her second 10.000 of the season and her first on floor while Mykayla Skinner and Tiffani Lewis recorded 9.975s. The Gymdogs scored their highest road score of the season despite some difficulties on floor, with rough landings and a fall from Sydney Snead. Their highest scoring event was vault, with only five gymnasts up, although the judges remained consistent with the wonky scoring.  Snead went for her Yurchenko 1.5 and won the event title with a 9.925.

As expected, Michigan dominated the second Big Five of the day. The Wolverines showed some weakness on vault, with landing errors and only one 10.000 vault, but otherwise they look postseason ready. Minnesota and Penn State each had problems early. Minnesota was able to use a second rotation bye to regroup and come back strong on floor. After finishing well, the Gophers finished third and will compete in the evening session of Big Tens next weekend. Penn State did not have as strong a recovery. All arounder Brianna’s Tsang was off for much of the night. The Nittany Lions fell to fourth and will be in next weekend’s early session with Rutgers. Despite a strong second rotation after starting on a bye, the Scarlet Knights were unable to capitalize on the Gophers’ and Nittany Lions’ rough starts. The surprise of the night was Iowa. The Hawkeyes had a solid performance and were able to win a place in the Big Ten night session. Unfortunately, Nicole Chow took a tough fall in the team’s final routine and was unable to finish her beam set.

Boise State soared on Thursday night to upset Washington and record its first 197 of the season. The Broncos couldn’t put a foot wrong, especially on beam, where they scored a meet-winning 49.400 with barely a check throughout the rotation. The win will be great for Boise State’s morale going into conference championships after taking a tough loss to Georgia last weekend. Washington gave the meet away with an uncharacteristically wobbly rotation on beam; the Huskies aren’t the first team to show some nerves on senior day, but they’ll hope to get this event back to normal before Pac-12s. BYU scored its seventh-consecutive 196+, including a meet-winning vault from Jill van Mierlo and its usual incredibly quirky floor rotation.

The Kentucky Wildcats did not have the meet they were looking for going into SECs next weekend. Landings across the board were hoppy, and the team counted Ella Warren’s 9.200 on beam—she was missing a jump connection—after Katie Stuart’s fall in the leadoff spot. Scoring was tight but not absurd all around, keeping even a very solid floor rotation for the Wildcats at 49.275. Illinois State did a stellar job bouncing back from its previous meet and did not count a fall. Gabrielle Cooke led the way for the Redbirds, especially on vault and floor. The team should be feeling confident going into MIC championship next weekend.

Each of these three teams have things to be thankful for at this meet. Denver and Iowa State notched 196s that helped their cause for RQS, and Arkansas not only scored a solid 197 but broke—yet again—a program record. The Razorbacks had outstanding rotations on bars and beam where Hailey Garner set a school record with a near-perfect 9.975 on the event. Braie Speed, Amanda Wellick and Sydney Laird each followed with their own 9.900s. Denver had its own record breaking night, tying its program record on uneven bars, which was lead by Maddie Karr’s 9.950. Freshman Lynnzee Brown returned to the vault lineup after an injury kept her out of the lineup for five weeks. Unfortunately, she sat her Yurchenko 1.5, but her mere insertion back into the lineup is a big step for the Pioneers. Lastly, Iowa State started off on a rough note but still managed to break 196. The Cyclones saved themselves on floor, where Haylee Young was able to nab a share of the title with her career high 9.950.

The first Big Five of the day was a bit of a shocker. Easy favorite Nebraska struggled on bars and beam, counting falls on each event and did not finish in the top three. The Huskers will compete in the first session of the conference championship next weekend. Keep in mind that Michigan won the title from the early session a few years ago, so don’t count the Huskers out yet. Illinois dominated this meet. The Illini looked clean and focused throughout and put up a season-best performance. Rae Balthazor’s clean gymnastics led the team and her to the all around title. Maryland surprised the field with a strong day, coming in second. The Terps finished last in last year’s Big Tens, so landing in the evening session is a big success. Ohio State struggled early on beam but came back after a bye to snag the final evening slot. Host MSU had a good night until the final event, only trailing Nebraska by a small margin going into beam. The Spartans had a rough time there, though, and finished fifth.

Article by the editors of NCAA Gym News 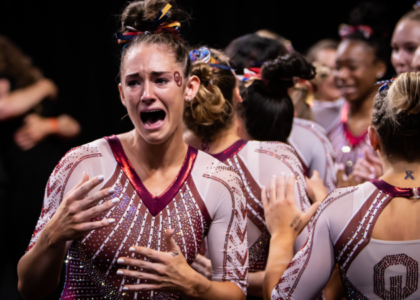 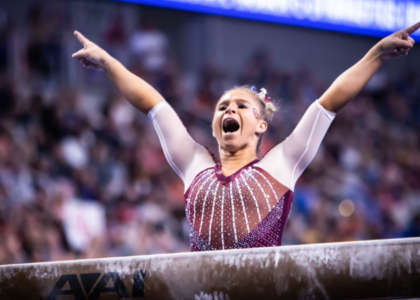