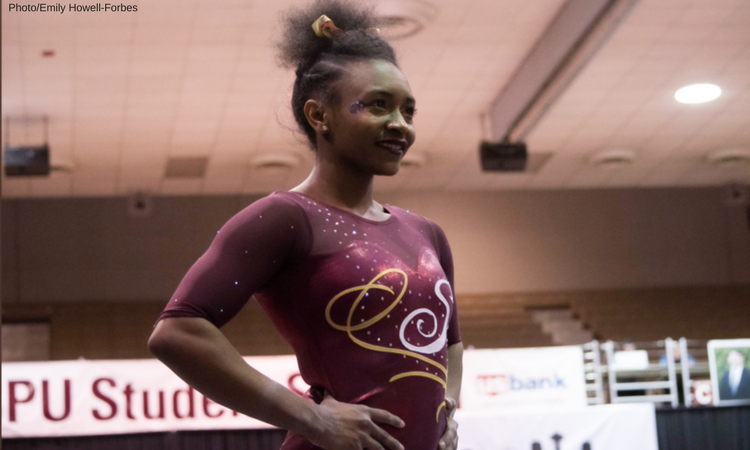 In the first MPSF dual meet of the 2018 season, the U.C. Davis Aggies visit the Seattle Pacific Falcons. The Aggies made their season debut on Monday at the NorCal Classic, finishing a narrow fourth place with a 194.4 with plenty of space to grow. In particular, watch how their vault lineup scores; their landings were imperfect at Stanford, but vault scoring was also notably tight in that meet. Also keep an eye out for senior star Alexis Brown, likely the frontrunner for the all around title tonight, and freshman Kelley Hebert who joined her in the all around last week.

SPU makes its season debut at home after an offseason of upheaval, losing Maryanna Peterson and Ariana Harger to retirement as well as a strong graduating senior class. USAG floor national champion Darian Burns will be the star of this team, likely competing AA. Sophomore Miyuki Matsune and junior Itzia San Roman have been three-eventers thus far in their career, but both have been working their fourth event to help with depth concerns. Also watch their six-strong freshman class, who are likely to make a big impact.

On site at SPU! Got to watch the last rotation of warm ups. The big news is that sophomore standout Miyuki Matsune’s hand is in a cast… that hurts. Got a glimpse of a SPU lineup sheet and it looks like Burns and San Roman will compete AA. I’m also really excited for the freshman debuts of Haven Lanzador and McKenna Zimmerman, both of whom are scheduled to do three events and who have looked really stylish in training.

For Davis, I saw mostly timer beam dismounts of what looked like a similar lineup to what we saw at NCC. Kyla Kessler stood out to me as a good one.

SPU team chant is INTENSE. It was loud.

Yasmine Yektaparast giggling during the pause between her first and last names. She knows nothing good can come. 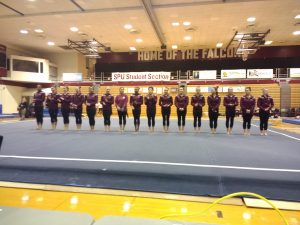 SPU has some vault variety! Zahra Lawal (the exo) is throwing Tsuk timers, just saw a FHS 2/1. Autumn Huskie’s 10.0 start is concerningly not in the lineup – could be nursing something minor, I don’t see anything braced. Davis looked gorgeous in touch but I saw some release falls. One caught her foot on a mat that her teammates were holding behind her and splatted on the backswing of a Shap.

SPU – SPIVEY: Y layout, big but deep with a step back.

UCD – KESSLER: Gienger, close with crazy legs. Nice bail. RIGHT on top of the bar on her double back dismount but survives. 9.60.

UCD – HEBERT: Blind 1/2 to Jaeger, a bit of feet. Good bail, slightly piked DLO dismount with a step back. The freshman was initially committed to Washington, so interesting to see her back in Seattle.

SPU – WIRTH: There’s the handspring 2/1, lands twisting as happens so often in in non-salto vaults but fairly well done.

UCD – PANCHAK: Short first handstand, gorgeous Gienger. Overcooks a high bar handstand and comes off. Finishes with a DLO, way short. Not sure if she dropped her knee but it was close. 9.0 is… generous.

UCD – LANDESS: Off almost immediately, I didn’t even see what happened. Counting a fall now. Too aggressive on a toe on, off again on a handstand. Toe on to Gienger to overshoot combo, a  bit of leg sep but solid! Double arabian dismount that looked great in warmup but she sits it this time.

This arena is basically a high school gymnasium, it’s fairly well packed out and it gets LOUD when these girls hit.

UCD – SUZUKI: Clear hip to Pak! Toe shoot, full turn to double back with a step forward. Those last two were really nice. 9.4 for that, not sure what went wrong.

Autumn Huskie’s foot is wrapped, she scratched from vault. Pity, she has a 10.0 and was expected to be the highlight – hopefully we’ll see it soon.

SPU leads by half a point – a win would be a shocker, especially with the new injuries.

UCD – YEKTAPARAST: Happened during the bar routine – looked like a layout off, entry unclear. She used to be an essential vaulter but something’s been weird since the autumn.

UCD – ITO: Totally missed this one. Alternating is not a thing that’s happening.

SPU – REESE: Nice lines! Leg split on bail. Free hip to Gienger combo! Two half turns to a stuck double back. One judge flashed 9.0, one 9.45… there’s now some kind of start value problem I think. Getting some vaulting done while we wait.

UCD – KESSLER: Great FTY, she and Hebert are such a gift to this lineup in only their second collegiate meets.

SPU – SAN ROMAN: Toe on to Maloney to overshoot, a little bit of feet but great. Off balance on her squat on and has to recast and try it again. Off on a handstand on HB. Double pike dismount, stuck.

Itzia has only ever competed bars as an exhibition in college, she’s really committed to adding this event to help with depth. Today not the day, but in the coming weeks it will be good and very needed. Especially with Matsune gone, bars is the most painful this year for the Falcons.

SPU – BURNS: Oh, handstands and lines. Jaeger to overshoot. She has little bits of leg split in all of her pirouette work. Full turn to double back, great. She’s so classy. Came in and out of this event last year but will be weekly. 9.55 is low to me.

SPU – LANZADOR: Had a fall on beam, didn’t see on what.

SPU – BURNS: Off line on her BHS-LOSO series but pulls it back. Great cat leap to switch 1/2?? combo. Front tuck, I could feel the impact of that landing. Punch front full off the end that might have been intended laid out but was not.

UCD – KESSLER: Lands at a weird angle and rebounds back onto her butt, never had a chance to save that. Rebound forward off a double back onto her hands. Rough after such a good routine for 9.775 last week.

UCD – HEBERT: Great opening double pike, not onto a mat unlike most of these passes. In Kelley’s ankles we trust, I guess. 3/2 twist to front layout, beautiful twisting form. UCD is miles stronger on floor than the other two events we’ve seen so far.

SPU – ZIMMERMAN: So poised for a freshman. BHS-LOSO with a little legs but solid. Side aerial to beat jump, off line on the landing and saves it in the jump. Fantastic switch to switch side.

UCD – YEKTAPARAST: Veteran on floor and the movement quality stands out from the first seconds. Front 2/1 and runs off the floor but hey, E pass is an E pass. Awesome combo pass, great double back to close that she could have stuck.

SPU – SAN ROMAN: Acro series I didn’t really see but safe through. Switch 1/2 to split, amplitude problem. Wobble on a side aerial but hangs onto it. Gainer 1/1 off the side.

Classy exhibition from Spivey on beam, she was great in JO and could be in here soon.

UCD – BROWN: Intense and fun. Double pike, kicks leg up to basically a Y scale and hangs onto it to avoid stepping OOB. Great double back. Straddle positions are great, leap combo into a Shushunova yessss. There are like four pieces of music cut together here. Great 3/2 to front layout to close. 9.9 with that save… BUT TECHNICALLY IS THERE A DEDUCTION FOR THAT???

UCD found their feet in that rotation, some really strong routines and even the ones with mistakes have clear and awesome potential. They’ll need more consistency to challenge typically-steady SJSU for the top of the MPSF, but there’s miles of potential.

Autumn Huskie took the wrap off her foot and exhibitioned beam, because I don’t know why.

SPU – GAUNA: Rudi to split jump, FAB. Front full to front pike, buckles a little but steps back and holds it. Stylish dancer too.

Caroline Jung is very excited about this routine and is standing behind me yelling.

Matsune is helping pull mats with her one non-casted hand, bless her heart.

UCD – SUZUKI: Step out of her BHS-LOSO but pretty. Cross step to keep a side aerial in line, I love seeing problem solving mid-routine. Awesome side scale choreo, reminiscent of Joslyn Goings.

SPU – ATCHISON: The only senior and she’s returning from a season out with injury, so this is a big deal and the team are going a little nuts. Punch rudi to straddle jump, glorious. Twists so fast! Mistimes a punch front out of her second pass and lands on her back – keeps going, she must be okay. Looked like her foot slipped. Popa to wolf full combo. Great last pass.

SPU – REESE: Double back, a little short. These SPU punch Rudis are so great. Tour jete 1/2 to Popa – amplitude problem.

UCD – YEKTAPARAST: Some split issues. Weirdly her switch 1/2 leap is her best leap. I think that was a punch Rudi dismount? Well done.

SPU – SAN ROMAN: Finishing out her collegiate AA debut! Whip to double back. I know this music… and her choreo is fabulous. Whip 1/2 to front layout. WAIT I THINK THIS IS AN OLD TEAM GB FLOOR MUSIC? She did a backspin and now I have visions of Claudia. I’ll be rewatching all of Claudia and Amy’s old routines now to check.

SPU – BURNS: Back on the floor that she won her USAG floor title on last spring! Punch front through double pike, big lunge. Switch side to popa to wolf 1/1, straddle positions are fabulous. Great double back. So committed to her choreo – I think it’s the same routine as last year.

Kyla Kessler exhibitioned beam and I think she hit.

Zimmerman exhibitioning floor, completeing the virtual all around on her freshman debut. Double pike and salutes herself OOB, short on a punch front. The punch fronts are KILLING US today.

Felt a little rough for SPU for what training has showed us this team is capable of, but it’s worlds better than last year’s season opener (189.425.) Excited to see the freshmen grow into their roles, especially Zimmerman and Lanzador. Huskie’s vault would also be a big deal, hopefully whatever caused her to scratch tonight is just incidental. Not a clue what the prognosis is on Matsune’s hand, but if she can get back in shape by postseason thing start to look pretty good for the Falcons.

**Added: Just been informed that SPU’s score was the highest season opener since 2006! That’s fantastic.

Felt a little rough for UC Davis too, and it was. They’re better than this, though the scoring wasn’t very friendly. Hebert and Kelley are such a valuable influx of talent for this team and they’ll hope to find a way to utilize it in the coming weeks. But a conference win is a conference win, and they now have two full weeks to rest before their first home meet against WVU and UIC on the 26th.

Alexis Brown took the all around title by four tenths despite a very unpretty vault landing. Kelley Hebert finished just a tenth behind her, and Darian Burns finished third with a 38.55 – four and a half tenths over her career high, and she can go much higher.

Thanks for following along! We’ll be back here tomorrow with more coverage of Week 2.