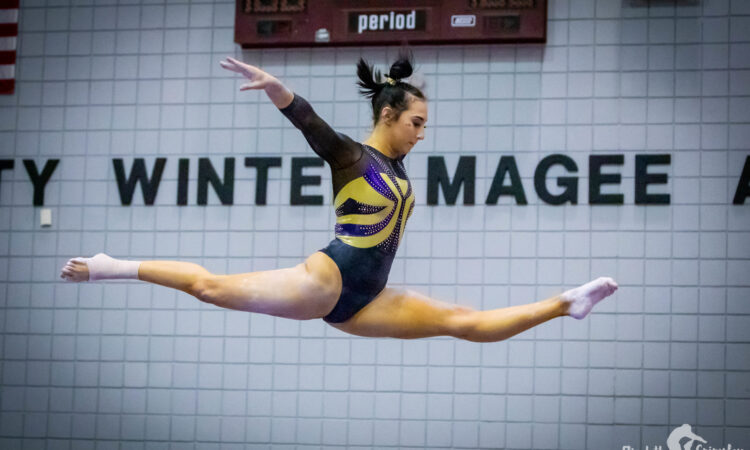 Hello from my couch! Welcome to tonight’s event where the Georgia Bulldogs and the LSU Tigers will face off in Stegeman Coliseum. And in case you can’t watch, stay right on this page because I got you! You can watch tonight’s event here and view the scores here.

So far this season, these two teams have faced some challenges that have limited them from reaching their full potential. Georgia had a disastrous beam rotation last week with five falls in one rotation, and at the end, its final score for the night was a disappointing 194.475. LSU had its meet canceled due to COVID protocols.

As for injuries, UGA’s Riley Milbrandt and Nhyla Bryant have both been seen in a boot, so expect them not to compete. LSU’s Lexi Nibbs has also been seen in a boot, and Haleigh Bryant is experiencing some plantar-fascia related issues. Luckily however, per head coach Jay Clark, Bryant will be seen on bars and possibly vault tonight with hopes of sliding her back into the all-around by Feb. 5.

Now with that being said, let’s begin!

Ready to Geaux in Athens

Georgia leos are here too!

Steve Schlanger and Ashley Miles Glieg are on for commentary tonight, I for sure thought we would get a Kathy Johnson-Clarke/Bart Connor or Alicia Sacramone Quinn/John Roethlisberger duo but I’m optimistic.

Kiya Johnson (LSU): Maloney to bail, great. Double layout with pretty pointed toes, DRILLED into landing, no movement at all. That will be a great leadoff score. 9.900

Rivers (LSU): Shaposh to bail, hits the last handstand and ooh! A tkachev I wasn’t expecting! Double layout, arm swing to hold onto the landing, stuck! 9.900

Dunne (LSU): Here she is folks! A bit loose on the first handstand but comes back with a good tkachev to Pak connection. Double layout, uneven body shapes in the air but she sticks the landing. 9.825

Bryant (LSU): Blind half to straddled jaeger, wish that straddle could be a bit bigger. Good last handstand. Double front half, beautiful amplitude in the air, stuck landing! These Tigers are really finding the landing! 9.900

Lukacs (UGA): Yurchenko 1.5, STUCK landing! Back to back stuck landings for Georgia! Her left hand was VERRRRYYY close to the edge of the table, but she hung on to it. 9.900

Shchennikova (LSU): Ray to Pak, gets it. Very quick routine. Hmmm, usual double layout, huge bound forward but tries to cover it up with the salute to the judge. 9.775

Durante (LSU): Straddled jaeger, gets great height above the bar. Full-in, chest down on the dismount and takes a step forward to the judge, similar to Shchennikova. 9.825

Pretty close after one rotation! LSU had some great landings while Georgia hit every one of their vaults! I still can’t get over that Rachel Baumann vault, wow. Broadcast is now showing a fun feature on Jay Clark coaching Courtney Kupets Carter back in her collegiate days since now they are coaching against each other in tonight’s meet. I also want to note that LSU’s new married coaching duo Courtney McCool Griffith and Garrett Griffith are back at their alma mater tonight. Just some fun things to notice!

Hattaway (UGA): Gienger, misses the second handstand by just a tad. Double layout, kind of a bounding step forward on the landing. 9.725

Ward (UGA): True Shaposh up to the high bar. Bail and a clear hip that she made look like it was in her routine but she comes off. Double layout, goes straight up and then straight down with a step. 8.975

Schild (UGA): Ray, great straddle position on that. Gets the last handstand. Double layout dismount, step back. She does her double layout with more of a hollow-body shape and sort of pulls her arms to her side to flip, but works for her is great! 9.850

Bryant (LSU): Front pike half, insane vault as usual, chest down on the landing and a hop forward. Not her best. 9.850

Definitely not as great of a rotation as the first one, but still some pretty solid routines. I am SUPER curious to see what will happen next rotation as Georgia will take on beam, an event that gave them some serious trouble last home meet. FIVE FALLS people! Kupets says that was not like her team at all, so we will see what happens tonight!

Magee (UGA): Here we go folks. She was actually the only gymnast who didn’t fall in that rotation last week. BHS BHS LOSO, solid. Full turn, covers her wobbles up from that skill with some dance. RO 1.5, step to the side. 9.700

Desiderio (LSU): Ummm I want my last name to be Desiderio. Double layout, her feet were kind of behind her on the landing and she jumps back bus stays in bounds. RO 1.5 to front layout, great power in that combination. Last pass is a double tuck, same kind of landing as first pass, but stays in bounds again! She will want to work on getting her feet in front of her on her landings. 9.700

Finnegan (UGA): BHS LOSO and A FALL! OH NO!! Side aerial and some more bobbles. RO 1.5, stuck landing. Good recovery after the first half of the routine, but I can’t help but wonder if the same beam rotation from last week will happen again tonight. 9.075

Arenas (LSU): FHS DTY, little shuffle back on the landing. Front layout to front full for the middle pass. Ooh that was a fun dance pass to her ground-level work! Double pike, and a fall, her momentum moves to her head and she is upside down? I don’t really know how to explain this? However, she forward rolls out of this into her choreo and ending pose which I find hilarious. 9.200

Dunne (LSU): Dramatic choreo in the beginning, ope this is Sophia Hyderally floor music! Front through to double tuck for her first pass. Switch leap to switch ring half, I didn’t expect that! Double pike for her ending, clean landing. 9.800

De Jong (UGA): Switch leap to split jump, I love this gymnast. Front aerial to straddle jump, pretty good so far. BHS LOSO, no wobbles! She fell on that last week so that is some great improvement to see! Side aerial to back full, fun to see! 9.875

Edwards (LSU): Very quick run into her front double. FHS front full to front full, she is still one of the only gymnasts I have ever seen do that pass. Huge double tuck to finish. 9.825

Baumann (UGA): Side aerial to LOSO, great. Interesting technique going into that full turn. Holds onto the switch side. RO 1.5, stuck landing! That will be a great score for the Bulldogs! 9.925

KJ Johnson (LSU): Extremely powerful music to start this routine. Full-in first pass, keeps her arms down instead of bringing them up on the landing. RO 1.5 to front layout, lots of power going into that corner closest to her teammates. Double tuck, steps forward instead of back but overall, no problem. She is stellar! 9.875

Cohen (UGA): Very unique choreo on the beam before she stands up. BHS LOSO, fights to stay on and it works. Switch leap to straddle jump for her leaps. Stuck double twist dismount. That is a great feeling. 9.750  Underscored imo!

Shchennikova (LSU): Double twist to arabesque, but looks out of control on that. Wish she could finish the double twist before she started the arabesque. RO 1.5 to front full, love that pass. Rudi to LOSO, right into that corner. 9.875

Wow, that really is the score so far! Looks like Baumann upped her career high on vault tonight and Rivers increased her career high on bars as well. Just waiting for Shchennikova’s floor score. AHHHH they are talking about Alexis Jeffrey on the broadcast!!! Here is another super cool thing I just learned a couple moments ago:

Cool thing UGA has going on with its back tattoos at tonight's meet: Every gymnast has a unique temporary tattoo, with De Jong having a maple leaf for being Canadian and Magee the heart + triangle symbol for adoption, for example. #NCAAgym

Desiderio (LSU): BHS LOSO, no issues on that. Random front aerial, with no jump after it? Cat leap to gainer full dismount, no movement on the landing. 9.900

Perez-Lugones (UGA): YASSSS GIRL! I love her!! Double pike, hop forward, she is just shaking it on this choreo! RO whip half to front full, crossover step ala Shawn Johnson on the landing. Double tuck, pulls it around after a low chest but makes it work. 9.800

Magee (UGA): Devil Went Down to Georgia music before it turns into a remix approximately two seconds after it starts… Piked full-in, NO ONE is clapping to the music even though she has clapping in her choreo. RO 1.5 to front layout for her last pass. Woo, for a minute I didn’t think she would make that double tuck last pass, but she lands it. 9.800

Durante (LSU): Front aerial to BHS BHS, brisk wave of the arms. Side aerial to full twist dismount, stuck landing. Nothing too crazy about that routine. 9.775

Roberts (UGA): I just can’t seem to tell the difference between Ward and Roberts, ugh. Crazy good amplitude on her piked full-in. Looks like the rest of this floor rotation will be amazing. Front through to double tuck for her combination pass and a bonus tenth in difficulty for ending with a D pass in that double tuck. 9.850

Shchennikova (LSU): Easy on Me by Adele in the background, it’s what we love to hear. Front aerial, brief hesitation before that beat jump. BHS LOSO for her flight series. Switch leap to split jump, front leg could be higher to really melt that 180 degree split position even more. 9.725

Lukacs (UGA): Lots of power on that double pike first pass. RO 1.5 to front layout, calm approach to that. Double tuck ankle crunch on the landing and she falls to the side. Possible broken ankle or Achilles? She punches the floor in anger as she knows something is seriously wrong. Entirety of Stegeman is silent right now as she is carried off the floor. 9.125

Baumann (UGA): First floor routine after her 10.0 floor routine last week! RO 1.5 to front full to open, not typically a routine we see as a first pass, but she kills it. Switch side to straddle jump, I haven’t seen that leap pass in college before! Double pike last pass, no lunge but a TINY TINY slide back. 9.725

Hawthorne (UGA): Stellar double pike, big hop back to control her power. Super high split jump coming out of her Rudi to split jump pass. Lots of arm swings in the air but holds onto it. Fun routine to end the night! 9.900

Great meet tonight! Rachel Lukacs is out on the floor in crutches so it seems like she is at least mobile and alert which is good. No 10.0s in this meet but then again no horrendous beam rotations so nothing too crazy. Aww Kupets and Clark are talking on the floor and they share a side huge! Awwww we love coach-athlete reunions!

Well that wraps it up for me tonight! See you next week for my coverage which hopefully will be more than one meet like I am accustomed to! So long my friends, farewell, goodbye!