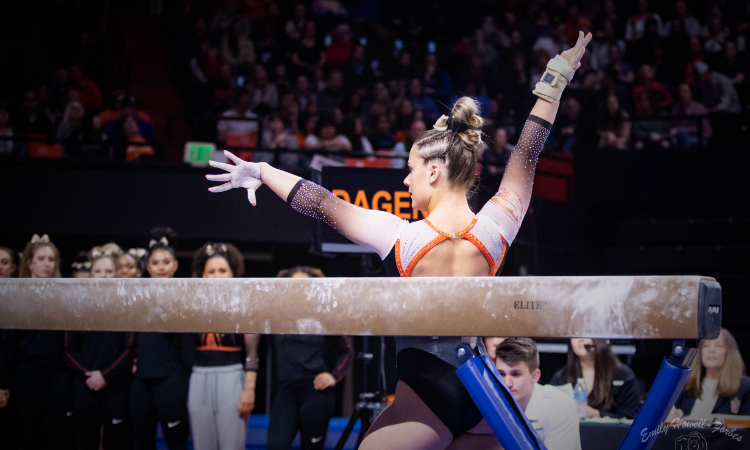 Pac-12 conference gymnastics for the weekend wraps up tonight with a highly anticipated matchup between visiting UCLA and No. 19 Oregon State. Behind the strength of Olympic champion Jade Carey, the Beavers sit in the top 20 heading into this matchup with UCLA, who had an opening day it will want to forget.

Carey’s debut couldn’t have gone much better, recording a 9.9 or higher on all four events and just missing the Oregon State record all around total. It may only be her second college meet ever, but that record is in jeopardy today. Carey is a welcome addition to the Beavers who fell short of expectations and struggled with injuries in 2021, finishing outside the top 20 after a sixth place NCAA’s finish just two years prior. Kaitlyn Yanish and Madi Dagen are two upperclassmen who, when performing at their best, can give Oregon State a shot at returning to nationals as a spoiler.

With a slew of Olympians, former elites and national team members, expectations are immensely high for UCLA this season. Unfortunately, after COVID and team drama and the first meet cancellation, the Bruins’ season debut left much to be desired as they totaled their lowest score since 2015. Olympic silver medalist Jordan Chiles nearly fell on her vault, returnees Kendal Poston and Sara Ulias recorded falls, and star Margzetta Frazier was injured in their opening rotation. There’s tons of potential on this roster, and UCLA is in need of some major adjustments after last week to reach it.

Note: UC Davis joined this meet but will not be shown on the broadcast.

Campbell, Flatley, Malabuyo in the all around today for the Bruins! They’ll battle with Carey and Dagen from the

Most interesting tidbit from the pre-meet commentary: Chiles is set to debut a new vault today. Will happen in the second rotation. She vaulted her usually sturdy Yurchenko double last weekend but stumbled out of it and scored in the 9.2s, so will be interested to see if it’s a downgrade or different 10.0 start value. She’s trained tsuks previously in her elite career.

Malabuyo (UCLA): First bars of the season. Maloney to huge pak, flexed feet, hops to high bar after a good pirouette, pikey double layout dismount and gets the stick. 9.800

Ulias (UCLA): Good first handstand, toe half attempt, well short of handstand and comes off the bar, rechalks and remounts, starts over and hits this time, beautiful Jager, toe on to bail, such tight leg form, good last handstand and double layout dismount, chest way low and puts a hand down. 9.000? Perfect aside from the two falls? I don’t think so… It was good, but….

Dagen (OSU): Y1.5. Comes in a bit short and lunges back, commentator says she hit the springboard odd. 9.775

Chiles (UCLA): Pike Tkatchev to pak, great, Maloney to Gienger, also nice, hits the handstand and sticks the FTDT! Much needed hit after the big miss before her. 9.925

Flatley (UCLA): Giant half to Jager, great height, toe on, bail, tiniest bit of pike, good handstand, get the landing on the double layout. 9.875

That should feel really good for UCLA. Hitting that opening bars rotation after last week’s disaster is a sign of promise for things moving forward. Obviously wasn’t without some issue, however, so let’s hold our breath for now.

Good opening rotation for Oregon State as well, improving nearly two tenths on last week’s vault total with a relatively weaker vault from Carey and a near miss from Dagen. Three 10.0 SV’s is also very encouraging.

Things should only continue to get more exciting from here! Tied through one!

Apparently Chiles made a decision in warmups today to go for a tsuk after warming up the Yurchenko double. Interesting.

Yamoka (OSU): Toe on, Maloney, toe on, bail, short of handstand, overcorrection from the fall last week, giant full double tuck, chest down and a hop. 9.700

Poston (UCLA): FHS front pike half, lands with her chest on her knees but makes it around this week, stumble back. 9.650

Dagen (OSU): Tkatchev, a bit close but good amplitude, nice bail, toe on, a bit of a back break, messes up her next giant and takes an extra swing, double tuck with a hop. 8.850

Domingo (OSU): Needs to get things back on track. Mounts to the high bar, toe on, Ray to overshoot, flexed feet, giant half to front giant half to stuck double tuck. 9.800

Jakubczyk (OSU): Giand half to Ezhova, Maloney to Gienger, love these realses, double arabian dismount and a near stick! Hopped in place. Such a fun routine. 9.800

Campbell (UCLA): Yfull. Massive height as always, goes for the stick and comes in a bit short, steps forward. 9.800

Just as UCLA rebounded from a bad bars lineup last week, Oregon State did the same. All but one routine hit and Carey notched a second consecutive 9.950 (with a 9.9/10 judges split). If the Beavers can stay consistent and set Carey up for big scores in the back half of this meet, they should be able to stay in contention for the win.

UCLA also needed a big rebound on vault after last week’s miss, and, it didn’t really get it. The Bruins avoided any falls this time but two of the three 10.0 SV’s were hammered by the judges for the obvious deductions and even the Yfulls, overall, lacked height and had landing deductions.

It’s still tight between the two teams and with beam to go for both squads, the win is still anybody’s to claim. At home and with UCLA’s issues on beam last week, I’d give Oregon State the advantage right now.

Ulias (UCLA): Needs to rebound after another bars fall. Front Rudi to open. Nicely through her leaps, smiling her way through her choreo to La La Land soundtrack, another clean leap series, finishes up with a RO 1.5 front layout with a controlled step. 9.850

Flatley (UCLA): Gets started with a triple full, big lunge back and to the side, keeps the heel up to avoid OOB, FHS front double full sissone, beautiful, switch ring to switch half, classic Norah execution on those, closes with a RO 1.5 front layout, good landing. Really good routine. 9.850

Gonzales (OSU): Gets underway with a front tuck to back tuck, problem-free, good full turn, switch half to split jump, just shy on the split in the first leap, dismounts side aerial to layout full, a bit messy and a step. 9.850

Moors (UCLA): So excited for this. FHS double front to mount, big squat and steps OOB, bummer, RO LOSO side pass, so floaty, switch ring to switch half to wolf full, a bit out of control, FHS front full to front tuck, missed the punch and sat it down. 8.800

Dagen (OSU): BHS LOSO, solid, switch leap to switch half, tip toes back out of it, small deduction, side aerial layout full, chest forward but holds for the stick. 9.800

A long wait for Moors’ score.

Malabuyo (UCLA): Kicks out of her opening double tuck, RO 1.5 sissone, switch ring to switch half, double pike, way short but lunges up to manage it well. 9.775

Oregon State did exactly what I told them to do, with five consistent performances to bring in a near-perfect score for Carey in the anchor spot. All the Beavers need to do at this point is copy and paste that over to floor, and a victory and likely season-high will come easily.

UCLA is having another rough outing, actually sitting in third heading into the final rotation, with beam an event the Bruins have been struggling on for several seasons now. This rotation right here is a HUGE test for the Bruins. If they falter, the gymternet is never going to let them forget about it. With Campbell scratching floor I’d presume she will also be removed from beam, giving UCLA even more hurdles to jump over this rotation as well.

Gonzales (OSU): Front full to front layout to open, dances out of it, switch full sissone, double pike to close, chest pretty far down, switch ring to switch half to end. 9.775

Dagen (OSU): Begins with a front double full, big step to the side, bouncy through her leaps, front layout front full, dances out of a bobble, ends with a double pike, good height and secure landing. 9.850

Sakti (UCLA): Two routines to get one hit. Switch leap to BHS LOSO, great, switch half to beat jump, full turn, so light in all her movements, cat leap side aerial layout full, big pike down and a step back. 9.825

Yanish (OSU): Should be a fun one! Huge double layout, stuck without a lunge, front full to front layout, big hop in place, switch side straddle full, a little wonky, dismounts with a double tuck, tiny slide back with the front foot in the lunge. 9.900

Carey (OSU): Yanish set her up and pressure is off with the win secured! Insane double double, can’t get over how she kicks out of it, front full to front layout sissone, tiny arm adjustments in the air on the leap, switch half straddle full, final pass double tuck, sky high, effortless. 9.975!

A new Oregon State program record all around total for Carey in her second college meet. Casual. After the Beavers’ first meet there were some concerns that her team couldn’t live up to her and her hype. Today’s 197 is a big score and is a step in the right direction to silence those skeptics (aka me). Oregon State had an overall complete performance today, notched an ideal home score, and even had room for improvement.

Although it looked sketchy at times, today was a better performance from UCLA as well. There are obviously some issues that still need to be worked out (in and out of the gym), but the Bruins also took a step in the right direction today. The bars hit to start the meet was satisfying and closing on beam in a must-hit situation with a hit should also feel good. If UCLA can right the ship on the leg events, it should find itself competitive again sooner rather than later.