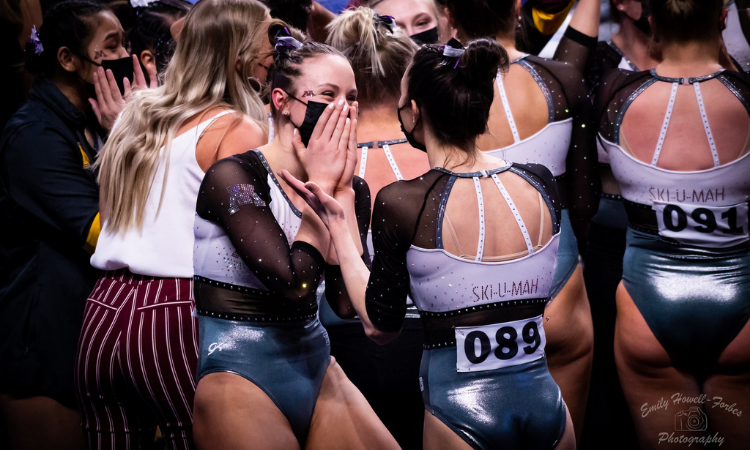 The 2022 season is two weeks old, and with things just now getting going, it’s the perfect time to take a look at how the season might pan out come April. Which teams are likely to compete on the final day of the regular season? Which gymnasts new and old will impress? And how will COVID-19 play a role in the outcome?

From Tokyo With Love

The most anticipated element leading up to the 2022 season was undoubtedly the performances of the 2020 Olympians. And it’s all thanks to the new NIL legislation, which allows gymnasts that otherwise might have turned pro to profit off their name, image and likeness. Throughout the 2022 season, fans will be treated to gymnastics from 10 Olympians, including four of Team USA’s six members from the Tokyo squad in Jade Carey (Oregon State), Jordan Chiles (UCLA), Sunisa Lee (Auburn) and Grace McCallum (Utah), as well as Marina Gonzalez (Iowa State/Spain), Brooklyn Moors (UCLA/Canada), Shallon Olsen (Alabama/Canada), Amelie Morgan (Utah/Great Britain), Ariana Orrego (Iowa State/Peru) and Tan Sze En (Stanford/Singapore).

Thus far, the U.S. gymnasts have been particularly impressive, with Carey coming close to Oregon State’s all-around program record in her very first meet, Grace McCallum tallying a 9.975 on floor and 39.675 in the all-around and Olympic all-around champion and bars bronze medalist Sunisa Lee peaking at 9.950 on her pet event.

MORE: Olympians in the NCAA

The 2022 freshman class is widely considered to be the best in NCAA history—or at least the best in quite some time—thanks not only to the swath of Olympians joining the collegiate ranks but the plethora of former elite and level 10 phenoms set to start as well.

Florida boasts the No. 1 freshman class in the country for a group that includes 2021 World all-around silver and floor bronze medalist Leanne Wong and standout level 10 Sloane Blakely, who was the first to sweep all four event titles and the all-around at the level 10 national championships.

UCLA, which had the No. 1 recruiting class for the class of 2021, boasts its own smattering of talented contributors in Olympic alternate Emma Malabuyo, Olympic Trials competitor Emily Lee and Canadian elite Ana Padurariu, alongside Chiles and Moors.

But perhaps the most exciting freshman factor in this year’s class of newcomers is the wide array of teams that boast these top gymnasts. North Carolina, Michigan State, Missouri and Stanford each welcomed a five-star recruit to their ranks for the 2022 season, with many of them already showing their worth in the first two weeks of the season.

MORE: 13 Most Underrated Freshmen to Watch in 2022 Women’s College Gymnastics

College gymnastics is ultimately a team sport, and you can’t talk about individuals set to dominate without also mentioning the teams. Before the season, we predicted the same top four from the 2021 season would likely be the final four competing on the last day in 2022 as well. We’re two weeks in now and that still seems to be the case.

Michigan looks exactly like it did on that fateful day last April when it hoisted the championship trophy for the first time in program history—and the team seems poised to repeat if it has any say in the matter. The only concern for the Wolverines will be a potential lack of depth. With no freshmen having contributed routines thus far and lineups composed of five all-arounders, even a minor injury could spell trouble for the reigning champs.

Florida is always knocking at the door of a national title. But since Jenny Rowland took over the program, the Gators haven’t been able to get it done, seeing nearly more postseason disappointment than success. However, with the star-studded roster it currently possesses, Florida will be hard-pressed not to contend come April. It’ll all come down to the team being able to find the most ideal lineups when it counts.

Utah struggled to put together a complete meet on every event in 2021, with bars being its Achilles heel much of the time. While week one seemed like old habits would die hard for the Utes in 2022, the second competition against Oklahoma proved that theory false and showed viewers a glimpse of the potential this team has. 2022 may just be the best chance at returning to glory that the Utes have had in quite some time.

Finally, Oklahoma may be without 2021 national all-around champion Anastasia Webb this season, but that means very little when it comes to a KJ Kindler-led squad. Known for developing “ninja level 10s” into NCAA stars, Kindler always seems to find 9.9-plus routines just when you think the Sooners’ depth is exhausted. She has a strong mix of returning stalwarts and standout newcomers to help the team once again finish at the top of the pack. Sometimes against incredible odds, Oklahoma hasn’t finished outside the top two in the country since 2016, and it would be unwise to count it out in 2022 either.

If a Door Opens, These Teams Are Entering

The top four may seem like it’s set in stone, but there are a number of other teams hoping to ruin the party when the time comes. Alabama, LSU, Minnesota, California and Denver each have pros that could help them make a case for not only the team final but the national title. However, they have some cons as well. What matters now is if the benefits can outweigh the potential downfalls.

Looking past the nationals picture, there are a number of other exciting storylines to keep an eye on as teams fight to not only make it to Fort Worth, Texas, but into the postseason altogether. A perennial bubble team, North Carolina is poised to finally return to the show in 2022 thanks to its new head coach Danna Durante and former five-star recruit Lali Dekanoidze. Missouri is in a similar boat but on a greater scale. Former five-star recruit Amari Celestine and Helen Hu, who is back from injury in 2021, are prepared to help the Tigers make a push toward the top of the SEC. Finally, while it’s easy to forget about the likes of Michigan State and Stanford due to their COVID-shortened seasons in 2020 and 2021, both teams are itching to jump back into the national conversation—and they both have the talent to do it, too. It should be an exciting year of college gym from the top of the rankings to the bottom.

Call It a Comeback

We’d be remiss if we didn’t mention those super seniors that decided to utilize their extra year of eligibility due to COVID, their “COVID year” if you will, and return for one more go at greatness in 2022. Fan favorites Lexy Ramler and Ona Loper from Minnesota turned the Gophers’ season outlook completely around when they announced their return, moving Minnesota from being a team that would like face a down year to one that is poised to return to the national championships once again.

Boise State’s Emily Muhlenhaupt has scored 9.9 or higher on bars 20 times in her collegiate career, including 9.975 four times. One of her primary motivations for coming back is to finally earn that elusive perfect 10—and she has the routine to do so. Other fifth-year seniors eyeing perfection include Iowa’s Clair Kaji on floor, Arkansas’ Maggie O’Hara on bars and Florida’s Alyssa Baumann on beam and floor.

COVID Isn’t a Friend of Mine

Like we’ve experienced since 2020, the coronavirus is always there to throw a wrench into college gymnastics’ plans. Last season saw four teams miss out on postseason competition with Georgia and New Hampshire missing their respective conference championships due to COVID protocols and Temple and Auburn having to pull out of regionals for the same reason.

While it’s unlikely something as drastic as the whole season getting canceled will occur this time around—especially with men’s sports like basketball plugging along business as usual—we’ve already witnessed COVID disrupting schedules through the first two weeks of the 2022 season. Ten meets have been postponed or canceled through two weeks of competition, and that’s not even including meets where teams found new opponents or joined other competitions at the last minute to keep their schedule alive.

The word for the year will surely be flexibility, and it might just be the team that handles adversity best that comes out on top. We just hope qualification or a national title isn’t decided by default rather than true merit.

READ THIS NEXT: The NCAA Report Card: January 19