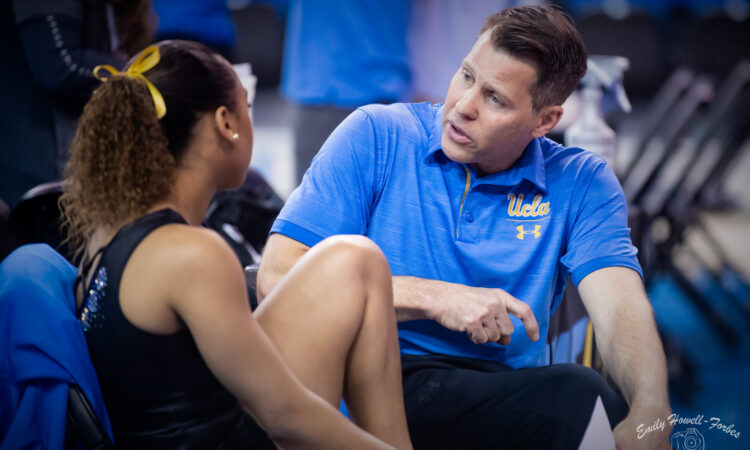 We’re through two weeks of the 2022 season, and by this point most teams have competed. And as commentators, coaches and gymnasts alike love to say, it’s still early. But that won’t stop us from having a little fun.

Based on the gymnastics we’ve seen so far, we’ll be going through a handful of overreactions we’ve seen and letting you know whether you should cool your jets or transition into full-on panic mode.

History Is Repeating Itself for Florida

Florida has fallen agonizingly short of expectations in several recent postseasons, and it’s obvious that this year’s Gators are drastically less prepared than the likes of Michigan or Utah. If you’re a Florida fan (or someone who shrieks with joy at Florida’s misfortunes), you might be looking at the Gators’ first two weeks, thinking that the stories of the 2019 and 2021 seasons are playing out anew and wondering if this season is all but over for Florida.

However, there are two reasons for optimism here. The first is that Florida has more depth than ever before (and more than any other team in the country), and the truly insane roster gives the Gators a LOT of room for error. The other is that those recent Florida postseason collapses came after dominant regular seasons with a high degree of physical readiness. Taking a more relaxed approach to January would make a lot of sense if the coaches felt that the story of those recent misses was that their team gave too much too soon and had nothing left in the tank come April.

Michigan Is Basically Guaranteed the Championship

You can’t argue with Michigan’s form so far this season. The Wolverines look almost exactly as good as they did in April 2021. It’s possible to dominate an entire season start to finish without really faltering—Oklahoma’s near-flawless revenge tour in 2019 comes to mind. It’s tough, though, and physical wear and tear tends to build up.

And that’s exactly what Michigan can’t take right now. Between Nicoletta Koulos’ lingering hand injury and the entire freshman class going AWOL, Michigan has literally seven gymnasts competing, and its exhibitions have not been as impressive as those competition routines. An injury, even minor, to any one of the Wolverines’ five all arounders would mean big, big trouble.

Penn Is Amazing and Will Beat Its Program Record in January

This is our own overreaction (specifically Rebecca’s, and she’s talking about herself in the third person currently), and frankly it’s probably true. We spent several years prior to the COVID pause ringing the “Penn will be good soon” bell, and even then there were some very good moments. The two deeply impressive recruiting classes that joined since the last time the Ivy League competed made it even easier to get carried away with training clip hype. The Quakers had a few growing pains in their first week back but came just 0.150 short of the program record this weekend. At this point, not breaking the PR this season would be a huge disappointment.

Maryland Is in Deep Trouble for Making Regionals

Sure, a 192 and scraping past Pitt and LIU aren’t ideal, and yes, a 46.600 on bars is downright scary, but no, the Terps are not in for a disastrous season.

Maryland regained 2021 breakout star Emma Silberman from an ACL injury, Aleka Tskinias is on her way back from an Achilles and Elizabeth Debarberie, who missed much of 2021 with presumed injury, is back at it. The team is largely young and inexperienced. A few more meets under the bright lights, plus a more typical all-around performance from Audrey Barber, should square away a lot of the issues from week two.

The big remaining question is where is freshman Lindsay Bacheler? Hopefully just temporarily sidelined. Her scores will provide a big boost when she ultimately competes.

Danna Durante Is a Legend and Will Change Everything for UNC

Partial credit on this one. UNC does look very likely to make regionals this season after five years away, and that would be a huge victory in itself. The visual improvement to Carolina bars is immense, and the coaching staff really does seem to have a great bond with the team.

An early season-ending injury to Hallie Thompson does sting for the Tar Heels, as must a sub-48 floor collapse this weekend that led to a loss to Rutgers. A few hiccups don’t mean that this wasn’t a successful hire, though.

Michigan State’s Start Is a Fluke

It’s easy to fall into the trap of remembering the Spartans’ lean years. They had a tough run both in and out of the gym over the past handful of seasons, capped by only competing twice due to COVID in 2021. But they have been bringing in stellar recruits in the past two signing classes, including two five stars. The freshmen and sophomores, who we’ve barely seen in competition, are the real deal. The Spartans are just getting started. Yes, the ceiling is lower than some rankings neighbors due to a lack of 10.0 vaults, but this is a squad poised to sail into regionals.

Georgia currently sits No. 31 in the in-progress rankings for week three, and while it may seem like the sky is falling and Georgia will never get back to its winning ways, it’s been literally one meet. We will admit that Georgia is a little worse for wear in 2022—when do season-ending injuries turn from bad luck to a pattern?—but there’s still some hope. The healthy gymnasts on the team have the talent to perform well. It’s now a matter of whether or not the coaching staff can get them where they need to be before it’s too late. A big ask at this point.

Jade Carey Is the Greatest College Gymnast of All Time

Look, it’s been literally one meet, but Carey certainly looks like she’s going to dominate the NCAA from the way she started. You don’t nearly break the Oregon State program record and then disappear into oblivion. However, we’re going to wait before calling her the greatest college gymnast of all time. How about we slow our roll a little and just call her the best freshman in 2022? That’s a possibility we can get behind after week two.

UCLA Is Doomed and Needs to Fire Its Coaches

There’s certainly a kernel of truth here: The issues at UCLA are a pattern. You could chalk last year’s fundamental ambivalence up to reduced depth, but if so, the star-studded freshman class should have made an impact. Conversely, you can blame a recent COVID outbreak for the 2022 squad’s lack of physical preparation, but that doesn’t explain last year. We’re forced to agree with Twitter that the UCLA coaches aren’t equipped to manage the talent they’re recruiting to Westwood.

On the other hand, the problems are nowhere near as severe as the No. 28 opening-meet ranking would lead you to believe. A lot of Monday’s chaos almost certainly will come out in the wash, and while UCLA is unlikely to make nationals this year, it should stay comfortably in the top half of the Pac-12.

Anyway, let’s be honest: UCLA Gymnastics has something very specific to offer the athletic department and larger university, and the Bruins’ fame has almost zero to do with their ranking. If they can fill the stands and ride a viral floor routine to the Ellen DeGeneres Show once a year like clockwork, what AD would risk that in exchange for a chance at a few extra ranking spots? UCLA’s struggles would have to be much uglier than this for Chris Waller’s job to be in serious danger.

Things might not look great right this second, but there’s still plenty of time. Florida proved itself capable of managing Alicia Boren’s ankles and Alyssa Baumann’s elbow throughout their careers; Hurd’s elbows and knee could be next on that auspicious list. Moreover, we’ve seen former elites become stellar event specialists; think Peng Peng Lee. Perhaps a change of scenery and new trainers and medical staff are just the fresh start Hurd needs to get back to full health and shine for the rest of her career.