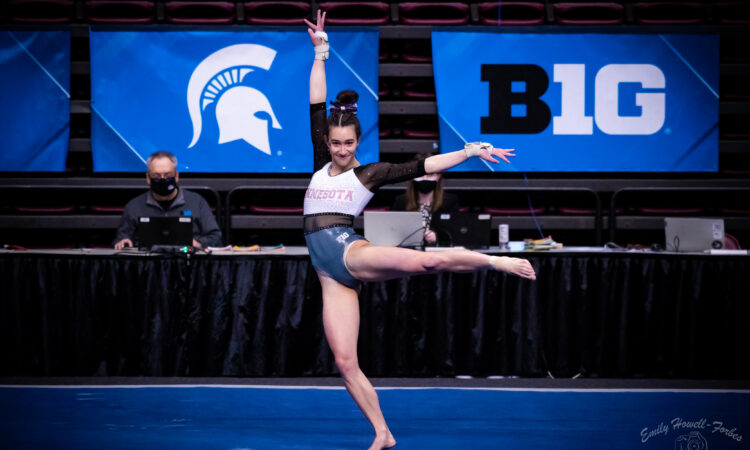 Hello, happy Friday! Can you believe it’s actually NCAA season? I can’t. I’m in disbelief that it’s 2022. A lot has happened since I last checked in with you all — most notably for me, I had a baby — so I apologize in advance if I’m a little rusty at this. Please remember I am coming out of maternity leave JUST TO BRING YOU THIS LIVE BLOG FROM THE PAV (you’re welcome).

While the majority of teams have their first meets this week, Minnesota has one final intrasquad before things kick off for real. This should be another fantastic season for the Gophers; yes, there were some key routines lost, but there are also some pretty significant gains in the form of incoming freshmen, athletes returning from injury and, most notably: the COVID bonus year for Hannah Willmarth, Ona Loper and Lexy Ramler.

There are many things I have my eye on tonight, so without further ado let’s get into it.

Minnesota has two four star recruits on its freshman roster—Haley Tyson and Lauren Pearl—capable of making an immediate impact on its bottom line. (This is especially significant looking ahead to a roster that will be absent of its superstars, Ramler and Loper).

Tyson is a strong all arounder with a Yurchenko 1.5 that could help the Gophers achieve their goal of having six 10.0 vaults. The bulk of her preseason training video has focused on bars; however, I just learned from the SID that Tyson will in fact being competing the AA today.

Pearl could also theoretically factor into multiple lineups (particularly beam) but only made her training video debut this week, so I am extremely excited to see what she does tonight.

Also new to the roster this year are Marissa Jencks, Alissa Fuelling and Olivia Reed.

Sophomores Erin Fortman and Ella Sirjord sat out most of the 2021 season due to injury. Fortman has the potential to be a staple on floor and could help the Gophers settle into a consistent lineup this season, which is something they had some issues with in 2021. Meanwhile, Sirjord has an absolutely stunning bar routine that has been showcased on Minnesota’s instagram stories numerous times this preseason and I need to see her in that lineup, please and thank you!

Vault and the quest for six 10.0 routines

The Gophers are returning 1.5s from Loper, Ramler, redshirt junior Maddie Quarles and sophomore Mya Hooten. Ramler and Loper have each scored at least one perfect 10 on the event, and it’s not far-fetched to think that both Quarles and Hooten are capable of the same.

Minnesota couldn’t quite nail down the perfect lead-off last season, though, so I will be curious to see who looks ready to step into that role. There are a lot of possibilities, including sophomore Gianna Gerdes and junior Kate Grotenhuis (who just debuted a 1.5), junior Halle Remlinger (who was seen training a 1.5 last season) and sophomore Emily Koch who recently debuted a respectable tucked 1.5 on the team Instagram story. Tyson’s aforementioned 1.5 is also an intriguing possibility. In case you were counting, that makes eight potential 10.0 vaults in the Gophers’ repertoire. Could they be the next team to boast a starting lineup of six 10.0 vaults this season? I’d say it’s unlikely, but certainly possible.

The absence of graduate student Mary Korlin-Downs on beam will be the Gophers’ biggest gap to fill (both on the event and in our hearts). This is where Pearl is most likely to see competition time, though seniors Abbie Nylin and Ali Sonier and sophomore Hooten have also shown a lot of potential this preseason. While it isn’t her strongest event, Tyson could factor in here too thanks to a solid triple series.

All right, folks, let’s get down to business. I’ll be updating scores, lineups and generally making sure you’re up-to-date on all of the action (including the behind the scenes stuff that never makes the stream). Let’s do this!

You can also follow along with scores and video (BTN+)($)

Alright folks, I am here in the Pav and here is the way this intrasquad format is going to go:

Instead of a true meet format, this is being treated as a practice session with scores. What that looks like will be the following:

There will also be gymnasts practicing simultaneously on other events. So I will keep my eyes peeled for any interesting developments there,

Not competing the AA tonight, since I know y’all are going to be all over me with questions: Lexy Ramler. But don’t worry, I was assured they are just resting her and she is not injured. Let’s all remember that she is in fact human, not superhuman, and is now competing with fifth-year ankles. We need to protect her at all costs. But no panicking necessary (I saw her run through each event in warmups).

I doubt they show the national anthem(s) on the stream, but I want everyone to know they kicked off the meet with the Black National Anthem, “Lift Every Voice”, before also performing the national anthem. I really really love to see it.

Not important but worth noting: Minnesota wearing my favorite fire leo tonight.

Notable from warmups: I think Koch might be warming up her tucked 1.5… she just did a tucked full. Loper: beautiful Y1.5, small step back.

My angle isn’t great to see landings, btw – so I’ll do my best.

Alright folks, obviously that lineup did not include their vault all stars, and as I’ve mentioned before: they are being cautious, treating this like the practice that it is, and not pushing people for no reason. FEAR NOT, Maddie Quarles, Lexy Ramler and Mya Hooten are all here looking very healthy.

The vaults we did see, however, seemed to look similar to last year – namely, they still don’t have super obvious front runners for the first couple spots of this lineup. I plan on learning more about the 10.0 start possibilities from Grotenhuis, Koch, and Remlinger after the meet if I can, but for now MN needs to boost that front end of the lineup to some cleaner fulls to get those scores up.

While I am thrilled to be back on the floor instead of all the way up in the rafters, I must note that my view of bars is more limited here.

Sirjord (UB): came off on her straddled jaeger, that’s too bad. She is such a lovely, lovely bar worker. I still have high hopes for her this season. Might be starting over? Yep starting over. Blind change to straddled jaeger to overshoot, LOVELY. Good HS. Full to double tuck with a step. 9.550

Pearl (BB): full turn, BHS LOSO, solid. She looks cool as a cucumber up there. Front aerial to split jump. Switch to split jump, also solid. No freshman nerves to be seen here, folks. Dismount is a RO 1.5 with big step to the side.  9.650

Loper (BB): BHS LOSO, floaty and solid. Full turn, front toss. Switch to straddle quarter, lost her footing a tiny bit but saved it without so much as a flinch. Her experience is showing. RO 1.5 dismount with a step forward. 9.825

Willmarth (UB): Good first HS. Ray looked pretty good. Bail to HS. Blind full to double tuck dismount, tries to finesse that landing but I don’t think the judges are going to give her that stick. 9.725

If I remember correctly, scoring is traditionally very tight at these intrasquads, so I wouldn’t fret too much about it at this point. That being said, the scores aren’t necessarily wrong; there are definitely some form issues, balance checks, wobbles and such to be worked on.

That being said, our freshmen are looking good folks – I expect to see both Pearl and Tyson seeing lineup time on beam.

Fortman (UB): muscled her first handstand, jaeger to overshoot with some leg separation. Tiny bit shy on her final handstand. Blind full to double tuck dismount with a deep knee bend in the landing. It’s great to see her back after injuring not one but both of her knees last season. 9.575

Tyson (UB): Opens with a ray with some flexed feet. Bail to HS, some leg separation and flexed feet again. Big FTDL dismount, though. Needs some fine tuning but the potential is definitely there. 9.675

Albertin (UB): Geinger to start with some leg separation. DLO dismount with a big step back. 9.550

Loper (UB): Gorgeous first handstand. MAloney to pak, her normal . Another beautiful HS. Blind full to double tuck with a tiny hop. I know everyone talks about Ramler’s bars (and rightfully so) but Loper is severely underrated on this event. So clean, so pretty. 9.850

Sales (UB): Good first HS. Bail to HS, nice. Markelov, little close to the bar but good. Finishes with a DLO with a hop.

Okay folks, you will again notice the absence of some key players here: namely Ramler and Hooten, but again I remind you: deep breaths, they are resting. They both did run throughs earlier.

I have also been told to keep an eye open for Mya Hooten’s routine next week against UCLA: it is new and fantastic, and should be a very big crowd pleaser (and what a better debut to make than at the first home meet with fans since 2020, against UCLA?!)

Jencks: Opens with a double full, step to the side. Solid leap series. RO full to back tuck second pass. Finishes with a front 1.5. 9.600

Willmarth is out of the floor lineup today.

Got some “yeah Alfie!” cheers as Hansen runs across the floor to deliver something to the judges.

Tyson: Opens with front lay out to back 1.5, lands short and takes a big hop/step forward. Good leap series. Fun little handspring choreo into the corner, thinking that is to satisfy the front tumbling requirement. Double pike to finish with some spotting. 9.450

Oh, Willmarth is back in now. Just changed up the order.

Willmarth: Double pike to open, OOB. I love when gymnasts use Apashe floor music. Second pass is front tuck through to double back with some spotting. 9.500

Sales: She is always a delight on this event. Opens with a double pike, OOB. Switch ring, leap series good. Wolf 1/1. My favorite spinny choreo to her feet. Finishes with back 1.5 to front lay. 9.425

People are kind of blocking the floor now, making it a little harder for me to see.

LeNeave: Double pike to open, heel was right on that line. Short on her combo pass, was suuuuper low on the front layout but somehow managed to deep squad land and save it. Finishes with a double tuck, some cowboy legs though. 9.325

Remlinger: Very happy to see her back on this event – she can make a HUGE difference here. Opens with a full-in, love to see it. Beautiful second pass. Finishes with a beautiful double tuck. Excellent routine, glad to see her looking healthy. She belongs in the back half of this lineup. 9.850