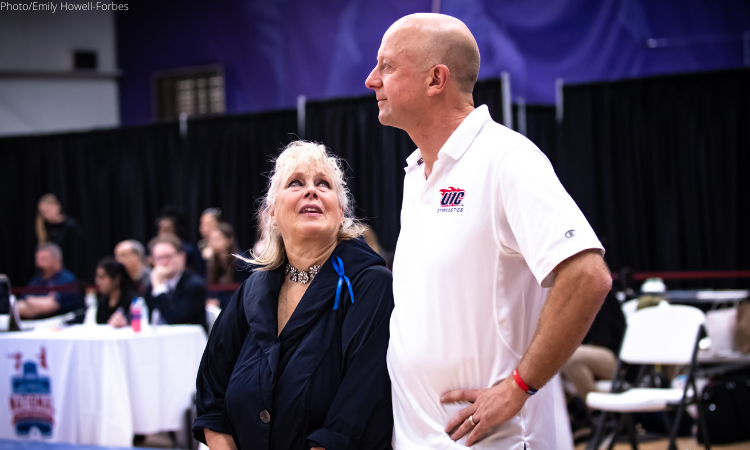 “Life goes on, and we’ll find a way to get through it and stay in touch with gymnastics,” Peter Jansson said after the USAG event finals in 2019. It was UIC’s last competition before the program was scrapped despite the gymnastics community’s best efforts to save it. Jansson and his wife Mary had held the reins of the program for decades, and their pain at the decision was palpable.

A year and a half later, on Jan. 23, 2021, Peter appeared on the floor coaching bars at Arizona’s season opener. He wasn’t yet on the roster, but his signature lean while his gymnasts competed was unmistakable. Some former UIC gymnasts even reached out to him after the meet, saying they noticed the lean on TV.

Peter was back. He was eventually added to Arizona’s roster as an interim assistant coach, filling the hole left by assistant David McCreary’s retirement. Head coach John Court said McCreary’s age made the pandemic risky for him, hence the sudden departure in October 2020.

Court and Peter are longtime friends, veterans of the small collegiate gymnastics community. Court gave Peter a call shortly after McCreary’s retirement, just to catch up. “Peter was probably in Florida fishing somewhere,” he said. As they talked, Peter offered to head to Arizona and help out on bars for the season—Court says it required Mary’s permission, of course, since she’s the real decision maker in the couple.

So began a hectic season, in which Mary was regularly flying between Tucson, Arizona, and Chicago to care for her elderly mother. The transition in the gym, though, was easy. Court values his staff, including assistant Taylor Spears, and says having three great gymnastics minds in the room is key. Though shifting from a longtime head coaching role to working within someone else’s system took some getting used to for Peter, his respect for Court and the program he runs is clear.

Adjusting to a power five conference also took some time. Coming from the MIC, which is entirely administered by the coaches—”We do everything,” Peter said—the major conference stage was new. Peter saw plusses and minuses to both systems. In the MIC, the coaches could run things exactly the way they wanted to, with only gymnastics in mind. In the Pac-12, wider conference and TV rules add restrictions—a trade-off for not needing to do the administrative work.

Despite those challenges, the smooth transition and good rapport among Court’s staff was evident in competition in 2021. Peter’s young bars squad had a solid year, with freshman Elena Deets leading the way.

Deets described a chaotic 2021 offseason due to COVID. Gymnasts had to train entirely on their own, an extra challenge for freshmen who didn’t yet have collegiate experience under their belts. “It was really hard,” she said. But once official practices started, Peter “fit right into the program,” Deets said. “We love to have him; he’s a great bar coach.”

For the Janssons, stepping back into collegiate gymnastics was an easy choice. They considered themselves fully retired after the 2019 season but found themselves missing the sport. As the 2019 World Championships in Stuttgart, Germany, approached, Peter and Mary made a last-minute decision to go. They were able to visit former UIC gymnast Toni Alicke, who is from Stuttgart, while they were there.

The Janssons stayed in touch with their other gymnasts, too, hosting a few dinners in Chicago for former UIC gymnasts who had stayed at the school to finish degrees. They traveled to a Missouri home meet to watch former Flame Alisa Sheremeta compete for Missouri and took the team out to dinner. “We’re just so proud of her,” Peter said. “She’s proof that someone from a smaller conference can do big things.” Peter pointed out that Missouri head coach Shannon Welker is a UIC alumnus and that it felt fortuitous that Sheremeta stayed in the UIC family in a way.

The Janssons also headed to a few Utah meets to watch longtime friend Tom Farden coach his Red Rocks. Clearly, they still had the gymnastics bug.

Peter did have a moment of doubt, though, when he stepped back onto the competition floor and got the familiar meet-day butterflies. “Do I really want to feel this way again?” he thought at the time. Watching his gymnasts compete and willing them to succeed but being able to do nothing to step in and help is stressful but worth it.

For the 2022 season, Peter dropped the interim tag and is a full assistant coach. Mary joined the ranks as a volunteer and works with the floor team. The goal for the Wildcats is to make the night session of Pac-12s, and if they don’t, to “win the session we’re in,” Court said.

For the Janssons, the warm winters in Tuscon are alright for now, though Peter misses the seasons in Chicago. They have a year-by-year agreement with Court and will stick with Arizona as long as seems right. Above all else, they appreciate the opportunity to return to college gymnastics. “We’re thankful,” Mary could be heard saying in the background of a call with Peter. “We’re so thankful,” he said.

READ THIS NEXT: 40 Years of NCAA Gymnastics