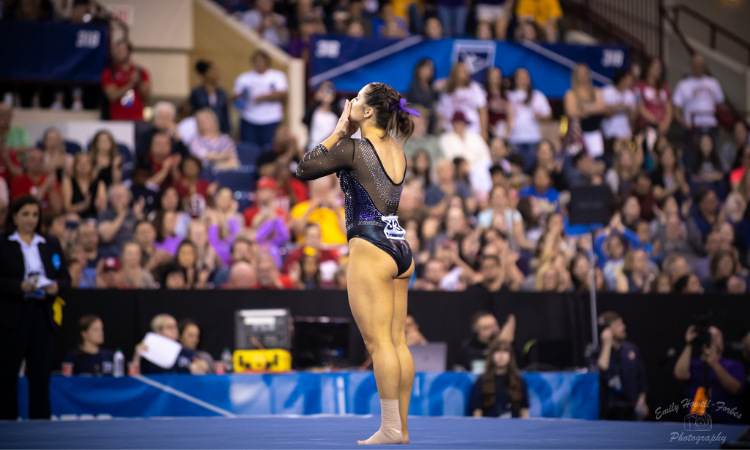 2022 is a special year—it marks the 40th anniversary of NCAA gymnastics. Since its first season in 1982, many teams have made a name for themselves, many champions have come and gone, and gymnastics has changed and continues to change.

Let’s take a look back at the last 40 years, starting with some statistics.

NCAA Individual All Around Titles:

Highest All Around Scores:

Women’s collegiate gymnastics wasn’t born in 1982. Previously, college gymnastics was administered by the Division for Girls’ and Women’s Sports (DGWS) from 1969 to 1972 and by its successor, the Association for Intercollegiate Athletics for Women (AIAW), from 1973 until the NCAA introduced women’s gymnastics as a championship sport in 1982.

The first team to win a national championship title in the pre-NCAA era was Springfield College, which won a total of three titles, followed by Southern Illinois, which also won three titles, Clarion State and Penn State with two, and Massachusetts, Cal State Fullerton, Utah and Florida with one. The Gators won the very last AIAW national title in 1982.

Greg Marsden, Utah and the Birth of NCAA Gymnastics

The problem with college gymnastics in the early 1980s was that no one was paying attention to it. Televisions were not showing meets because no one was interested in watching them, and as a result, women’s gymnastics was not taken seriously and had no chance for growth.

The person who changed it all was Utah head coach Greg Marsden.

Marsden, who had started Utah’s gymnastics program on a part-time contract in 1974 at the age of 24, understood that if he wanted to give women’s gymnastics a chance to grow and compete with such sports as football, baseball and basketball, he had to turn it into a show. Thus, he tightened the schedule of meets, made results available to viewers and built pathos, hiring cheerleaders, music bands and pyrotechnicians. Then, he promoted meets, going as far as creating provoking posters and billboards, designed sparkling leotards and sent his gymnasts on missions to recruit fans. He made Utah gymnastics popular by making people talk about and remember it. People did remembered and showed up in greater and greater numbers.

At the conclusion of Marsden’s career in 2015, 15,000 fans attended Utah’s meets in the Jon M. Huntsman Center in Salt Lake City.

Utah won the first five NCAA national titles between 1982 and 1986. One of its best gymnasts, Megan (McCunniff) Marsden—Greg’s wife and future head coach at Utah—won two consecutive national all around titles.

In 1987, however, a new face appeared on the national scene. Georgia, led by head coach Suzanne Yoculan, won its first NCAA title. The following year, yet another new face burst into the scene. Alabama, coached by Sarah Patterson, took the NCAA crown. It was the beginning of the “Suzanne v. Sarah” rivalry, which took gigantic proportions in the early 2000s and even prompted ESPN to produce an SEC Storied documentary that explored their relationship—”Sarah & Suzanne.”

The rivalry between Georgia and Alabama was not just about winning meets. The two teams measured their achievements against each other, to the point that whatever one team got, the other team needed to have it, too. The rivalry was so extreme that even Yoculan’s salary was tied to Patterson’s, as the Georgia head coach’s contract stated that she always had to be the highest paid coach in the NCAA. Every time Patterson got a rise, Yoculan automatically got one as well.

By the time Yoculan retired in 2009, she had led Georgia to win 10 NCAA national titles, more than any other team, including five consecutive ones between 2005 and 2009. Alabama was not too far behind. The Crimson Tide won six national titles, including a last one in 2012, the year before Patterson’s retirement.

After they both retired, Yoculan and Patterson took on the habit of having coffee together and discussing gymnastics, something they had never done when they were at the helm of their respective teams.

In the early 1990s, while Utah, Georgia and Alabama were busy trading team titles, Kentucky recruited a gymnast who to this day remains the only athlete to have won three consecutive NCAA individual all around titles.

Jenny Hansen was not supposed to be a Wildcat. Recruited by such big teams as Alabama, LSU and Florida, Kentucky was the sixth college she visited. Until the very last minute, she wasn’t even promised a scholarship for her freshman year.

Upon arriving in Lexington, however, Hansen took the NCAA by storm, winning the national all around title in her freshman, sophomore and junior years. History was in the books.

Curiously, Hansen returned to competition nearly twenty years after graduating from college in 2011, aiming, albeit unsuccessfully, at the 2012 Olympics.

The 1990s were the decade of records, and the year of Hansen’s graduation, incidentally in a regular season meet against Kentucky, a young Georgia freshman made history once again. Karin Lichey, in only the eighth meet of her career, scored the first—and to this day only—perfect 40.0 in NCAA history.

Lichey later recounted that she doesn’t remember much of the meet, except for the fact that she wasn’t feeling well that day. She and the coaches decided to take the meet one event at the time, but she scored 10.0 after 10.0, so she kept going, until the historic result.

Lichey went on to score other 16 perfect 10.0s in her career—she holds the seventh most perfect scores in NCAA history.

In 1997, a fourth team won the NCAA title for the first time. UCLA was led by a former ballerina with no previous gymnastics experience—Valorie Kondos Field, who in just over 20 years coached the Bruins to seven NCAA titles, most recently in 2018, the year before her retirement.

Gifted with unusual leadership and mentorship skills, a strict and controversial coaching philosophy and extraordinary personal charisma, Miss Val drew a total of 14 Olympians to UCLA, including Kyla Ross and Madison Kocian, the first Olympic champions to ever perform in women’s NCAA gymnastics.

She’s best known for her innovative and captivating choreography, a tradition that is currently carried on by current UCLA choreographer BJ Das. The Bruins have boasted viral routines every year since 2016: Sophina De Jesus (2016), Hallie Mossett (2017), Katelyn Ohashi (2018 and 2019) and Nia Dennis (2020 and 2021).

Courtney Kupets, the Greatest Of All Time?

Between 2005 and 2009, Georgia won five consecutive NCAA titles. A crucial contributor to the Gymdogs’ lineups was 2004 Olympic medalist Courtney Kupets, who many consider the best gymnasts to ever perform in the NCAA.

With very difficult routines and near-perfect execution, Kupets won three national all around titles in her freshman, sophomore and senior years. She missed out on the chance to defend her title in her junior season due to an Achilles tear.

Kupets won a total of nine individual NCAA titles and was the first gymnast to ever win a national title in the all around and on all four events.

Kupets returned to Georgia in 2017 to become the Gymdogs’ latest head coach.

After UCLA won its first national title in 1997, it took 16 years for a new team to upset the usual four and claim NCAA victory. The Florida Gators, led by head coach Rhonda Faehn and freshman star Bridget Sloan, won their first national title in 2013. The following year, Florida tied with newcomer Oklahoma for the first tied championship victory in NCAA history.

Florida also won the title in 2015, Faehn’s final year as Gator head coach. She was replaced by Jenny Rowland, who’s been fostering a more inclusive environment in Gainesville but has yet to win an NCAA title.

For Oklahoma, the 2014 co-victory was the beginning of head coach KJ Kindler’s incredible legacy. Since then, the Sooners have won three more titles and have finished in the top two every year since 2016. They have also won the last three individual national all around titles with Maggie Nichols (2018 and 2019) and Anastasia Webb (2021).

Gymnastics Is More Than a Sport

In the wake of the Larry Nassar scandal, in Jan. 2018 Maggie Nichols announced that she was “Athlete A”—the first gymnast to report the disgraced doctor’s sexual abuse to USA Gymnastics. That season, most NCAA teams wore teal ribbons in support of survivors. In March, Oklahoma and UCLA also held a #TogetherWeRise meet in honor and support of survivors.

That summer, UCLA’s Kyla Ross and Madison Kocian revealed that they were victims of Nassar’s abuse, too.

The story of Maggie Nichols and of the Larry Nassar scandal was told by Netflix’s documentary “Athlete A.”

In 2021, Michigan joined the exclusive winners’ club, becoming only the seventh team to win an NCAA team title. According to head coach Bev Plocki, after a disrupted year due to the COVID-19 pandemic, it was the deeper bond in the face of adversity that the pandemic created, together with the elimination of all external distractions, that gifted the Wolverines with that extra edge that allowed them to win their first national title.

After 31 years as the leader of the Michigan team, the victory was a testament to Plocki’s commitment to the program and to the legacy she’s created.

Will the Wolverines repeat as NCAA champions in 2022? The wait is almost over. Join us on Jan. 5 for the start of another season of great gymnastics.

READ THIS NEXT: Leotards Throughout NCAA History