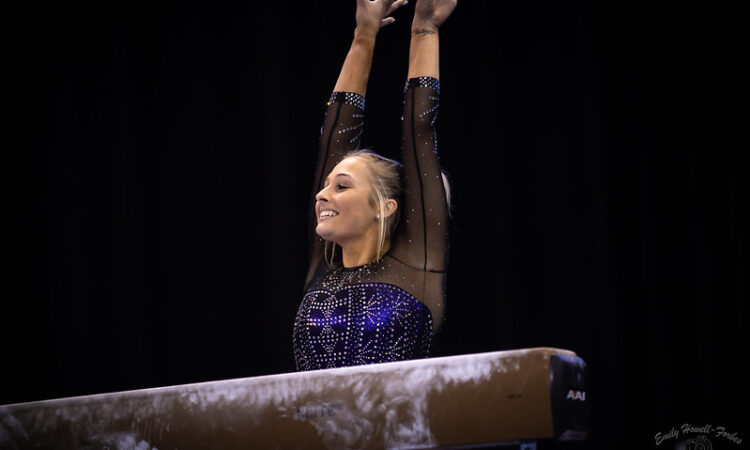 The Salt Lake City teams dodged upsets yesterday, with Arizona State barely dodging an ascendant Boise State as the Broncos counted a fall in the second-last routine of the meet and LSU persevering through a tough day for freshman Haleigh Bryant. Utah and Kentucky should both be happy with meet scores that rank among their top performances of the season. Both Utah and LSU can nearly guarantee their qualification to nationals with twenty solid hits but as we learned painfully yesterday, that’s in no way guaranteed. Note that both Utah (vault) and LSU (beam) have to close the meet out on events that weren’t their best yesterday… always makes things more exciting.

Worley (UK): One and a half, little hop. Kentucky looks focused. 9.9

Patterson (UK): Pike half with a hop back.

Sabado (UU): Blind to Jaeger, ever so slightly loose on the catch, toe on to bail. Double layout stuck. It’s full enough in the Maverik that the crowd is a real factor in this one. 9.875

Clark (ASU): Full turn, BHS LOSO and off. Switch split. One and a half twist stuck.

Scharf (ASU): Double wolf turn. BHS LOSO, slightly off line, side somi. Slight scoot on the one and a half but the Clark fall is not a problem now.

Edwards (LSU): Front double full with a bit of bounce.

Johnson (LSU): Nailed the full in. Good double pike too. Better than all of her tens? 9.95

Everyone but LSU came in above their NQS on that event but Arizona State was the biggest deal, with its best beam rotation since 2007. Really feels like all four teams entered this meet focused and with belief that they can pull it off. LSU breaking through on bars is also a huge deal. A big beam rotation could bring 198 into reach for the Utes.

Edwards (LSU): Slightly undercooked one and a half, step back.

Johnson (LSU): Decent hop back on her DTY.

Bryant (LSU): FHS pike half stuck. She’s only done that once before and you remember what happened. Yeah lol 10.

Nixon (UK): Maloney to bail, great, FTDB and I couldn’t quite see the landing because Garrison was in the way but it was at the very least good. 9.9

Angeny (UK): Blind to Jaeger to overshoot, high and clean, slightly shy on the last cast, FTDLO with a hop.

Isa (UU): Candle mount, I thought she might come off on her choreo for a horrible second, triple series. nailed. Teensy scoot on the gainer full. 9.95

Paulson (UU): Got the series. Full turn, cat leap side aerial back full. The Utes are AMPED. 9.95

Randall (UU): Hit series, beat to sheep. Sissone. Great Rulfova, she’s really cleaned up the legs this meet. One and a half, tried to get the stick but had to step forward to salute. 9.85

O’Keefe (UU): Side aerial LOSO, landed that kind of in front of herself but finessed, switch split good. Stuck dismount, that’s definitely a 10 threat. 9.95

Gutierrez (ASU): Two and a half twist good. Good Rudi, well controlled combo pass. This has been a breakout year for the junior.

Leonard-Baker (ASU): One and a half front full, milking it. Tour jete half wolf 3/2. Chest down a little but well controlled landing on the double pike. 9.875

Another super, super sharp rotation. All four teams produced a rotation that’s not the best of the year but safely among the top-ranking meets

Smith (ASU): One and a half, great, little hop back.

Johnson (LSU): Overcooked her final handstand and fell. How many times have we seen that? Good dismount. 9.325

Durante (LSU): Aggressive first handstand, Jaeger kinda sideways in the air, leg separation on the Pak. FTDB with a little hop back.

Magnelli (UK): Just saw a hop forward on her one and a half dismount. 9.85

Patterson (UK): Full turn. Watching her vault I always forget how small she is. BHS LOSO, check. Front aerial to split. Got the dismount.

Paulson (UU): Front lay front full. Two and a half controlled very nicely. One and a half front lay is great.

O’Keefe (UU): I kept looking away during tumbling, I swear I’ll get hers. Great double pike. Front lay front full with a slightly longer step. One and a half front lay, the kind of stick that shows that she was a few degrees away from sitting. 9.95

Hall (UU): One and a half with a bit of form, large step forward.

O’Keefe (UU): Slightly pikey FTY with a substantial bounce back.

Stanhope (UU): Deep one and a half with a step back.

Rucker (UU): ONE AND A HALF STUCK. I have never seen her stick that. Dang.

Burch (UU): One and a half twist, even crazier than usual on the table but pulls her heels together.

Boyer (ASU): Toe on to Maloney to Pak, great. Got the dismunt.

White (ASU): Van Leeuwen, half turn to bail to toe on, good.

Shchennikova (LSU): Got the series, hip break on her Onodi, switch to split. Weird fall down to the beam on choreo, second check later on. 9.825 I would like to share some of their drugs please.

Johnson (LSU): Got her series, bend check and off on an aerial. Double full stuck. It’s close enough that having to count the Shchennikova score could be all it takes, I don’t know.

Campbell (LSU): Had to fight for her press handstand. Front aerial to split. Switch switch half. Double full with a hop. I think she’s going to do it. 9.925

DeGuzman (UK): Deep on the punch layout on her last pass but avoided falling. WHy are those hurting everyone so badly this year?

Worley (UK): Great control on the full in, that pass is so consistent for her, switch ring switch side. strong double pike to finish. Can’t catch LSU but might be enough to sneak up to around where ASU is.

Unfortunately, it was the Shchennikova score that decided this meet. There are very legitimate reasons for Arizona State and Kentucky (they ended up tied, seriously, though Kentucky would have advanced) to be upset about the way that ended. Weird conclusion to the weekend, for sure.