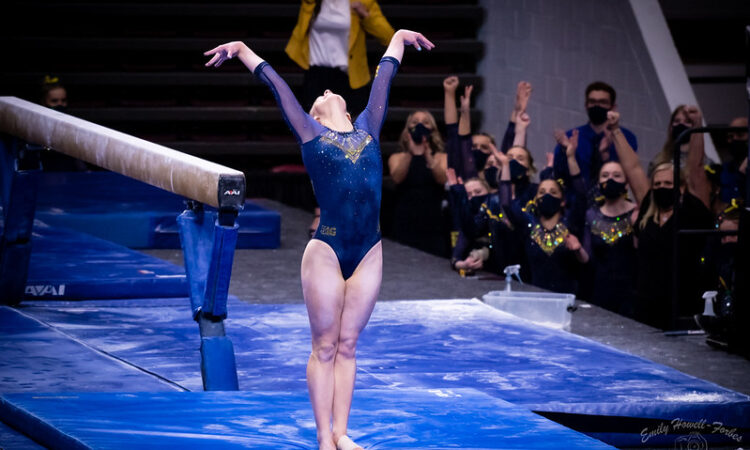 Ohio State was Friday’s big surprise in Morgantown. The Buckeyes soared to a season high and an upset win over BYU. While they’ve got only an outside shot to contend today, it’ll be great fun to see them finish their season here.

You might have walked away from Morgantown yesterday feeling that Cal has the upper hand over a nervy Michigan. Don’t be fooled, though: A great meet from Cal was less than one tenth better than Michigan’s score. UCLA, meanwhile, finally put together a solid beam rotation with the help of Norah Flatley but fell short on floor (!) to produce yet another low 197. With beam looking healthy the great meet that we’ve all been imagining all year is closer than ever for UCLA, but the Bruins couldn’t have left it any later. Who knows how they’ll handle that sort of do-or-die pressure.

You’ll want to be in front of your TV early for this one because the first rotation is PHENOMONAL. Michigan starts on vault where it’s far and away the best team on the country and a statement rotation there could be difficult for any other team to match. Cal opens on bars where it has a No. 1 ranking of its own and a peak score of 49.825, Ohio State returns to the event on which it clinched its upset over BYU and UCLA gets to set the tone for the meet on all-important floor.

Wilson (UM): Soft on the table and a little underrotated on her one and a half, cross step back.9.875

Morrison (UM): Good one and a half, tiny hop forward, comparable to Wojcik. 9.95

Guggino (UM): Overrotated one and a half slightly, big step forward. 9.875

Swartzentruber (OSU): Didn’t watch this but the commentator called her Swartzburger TWICE and I feel bad for her.

Hodges (OSU): BHS LOSO, great, full turn, standing LOSO. One and a half twist with a hop.

Wright (UCLA): We joined halfway for this one but she tripped in her leap pass and had a position issue. Not sure she completed the combo.

Andres (UCLA): Chilling out for a substantial length of time with BJ and Dom as the judges conference over Wright’s fall. Two and a half punch front, didn’t punch with her legs together and it was a bit weird but dynamically not a problem. Underrotated double back, step forward. 9.825

Frazier (UCLA): Whip through double back. Forgot I was supposed to be writing for a second but she hit. 9.9

Campbell (UCLA): Good control on the front double full, tour jete half Popa. Again on the double back, perfect front foot control. Bit of a bounce out of the front lay front full. Sam says “Doing a floor routine two days in a row, that’s not something that they practice in the gym.” uhh? 9.9

Dennis (UCLA): This is pressure. Front lay through double back, scoots the front foot but it hasn’t looked that good in a second. Front full front lay, actually well controlled and even on her great routines she usually fakes it. Leaps, Rudi to split. Man, that’s a big freaking deal for her. 9.925

Not a statement rotation from anyone, with Cal and Ohio State slightly further below expected value. Still great numbers and some resilience shown as every team had early drama and was able to drop it.

Poston (UCLA): Actually really good after a chaos vault yesterday, high and clean with a hop. 9.85

Wright (UCLA): Usual soft knees but just a small hop on the one and a half. 9.8

Dennis (UCLA): High and clean FTY, better again than I’ve seen for a lot of this year, little hop back.

Heiskell (UM): Jaeger, overshoot, I think that was a hop on her dismount. 9.95 maybe not.

Koulos (UM): Blind a touch late to great Jaeger. Little deep on the double lay with a hop. 9.875

DeSouza (Cal): Joined halfway, orphan split jump, stuck-ish one and a half twist.

Watterson (Cal): BHS LOSO, looked like she missed a foot on her side aerial back full and still made it. 9.9

Edwards (OSU): Missed the first pass, front lay out of the second pass underrotated and scrabbles to keep it on her feet.

That was huge for the Wolverines who are on program record pace once again. I can’t verify at the moment but per the broadcast that’s a program record. UCLA kept the meet moving with a very satisfactory vault rotation and Cal slightly outperformed expectations on beam.

Edwards (OSU): FTY, baby hop to the side.

Gagliardi (OSU): Yurchenko half on tuck off, overrotated with a couple of big steps.

Ulias (UCLA): Toe blind to Jaeger, a touch close but no loss of form or swing, great bail. There was a second when I thought she’d go over on her bail but she made it, stalder double back.

Flatley (UCLA): Eagle front giant to Jaeger, good, arch on a high bar, double lay with a hop back.

Bauman (UM): BHS LOSO. Switch half split. Side aerial back full with a step.9.85

Wilson (UM): Hitch kick, big check on the series, cat leap switch side. Double back with a hop. 9.75

Brooks (UM): Great control on the series. Great double back. 9.95

Wojcik (UM): Bend check on the triple series. Full turn, big hop on the one and a half twist. 9.7

Heiskell (UM): Cat leap side aerial. Switch straddle quarter. BHS LOSO emphatic. One and a half with a major hit. 9.9

Bordas (Cal): Slightly overcooked double back. Looks like the dynamics are a bit off on her combo pass. Switch switch ring half. 9.825

Li (Cal): Double pike, switch half wolf one and a half with substantial position issues. One and a half front lay, not quite right but hangs on with her toes. 9.925 okayyy

Cal has likely done enough to stay ahead of UCLA.

DeSouza (Cal): I didn’t see this but apparently she stuck a full which is weird since I’ve only ever seen her do one and a halfs.

Clausi (Cal): One and a half super messy in the table with a big hop forward.

Swartzentruber (OSU): Maloney to Pak, spectacular, van Leeuwen is great. Double layout with a tiny hop. I think that’s it for her career and she should be so proud.

Poston (UCLA): Beat to split 3/4. Fall on the triple series. One and a half twist with a hop. The road to Nationals just got really, really, really narrow.

Dennis (UCLA): BHS LOSO, leg up check but hangs on. Switch switch half.

Flatley (UCLA): Front aerial BHS good, L turn full turn. BHS one and a half with a hop. 9.9

Koulos (UM): Two and a half twist, double pike, getting the landings. Front lay front full with a bouncy step. 9.9

Brooks (UM): Lunge slightly long on her full in but front foot stays down. Front through double back great. Double pike kinda-stuck with a low chest. 9.9

Wilson (UM): Michigan is basically locked in and is now just hunting the 198. Half in half out spectacular and controlled. Whip half front full. Switch side half Popa. Double back overrotated but she’s clinched both a Nationals spot and a 198.

Wojcik (UM): Anchor is interesting for her. Double pike, just pivots the front foot, one and a half front tuck sissone is a downgrade but an intentional one. Rudi to straddle slightly off but controlled the landing.

Season high for UCLA wasn’t enough and the Bruins will miss nationals for the first time since 2006. Not a huge surprise, but still a substantial shocker in terms of the landscape of the sport as a whole. Meanwhile, a third 198 for Michigan shows that the Wolverines stand a real chance of winning the national title.