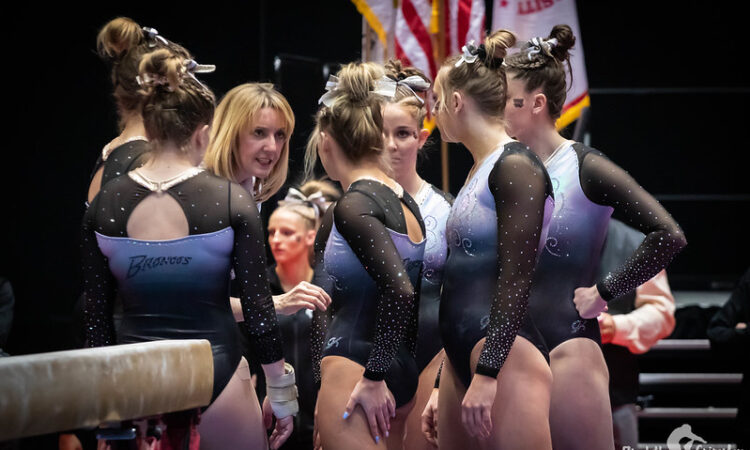 Western Michigan has been a definite loser of the pre-regionals discourse. Rather than celebrating that the Broncos qualified to regionals for the first time in almost four decades (really!), we’ve spent most of our time bemoaning the incredible screwedness of its opponent. We weren’t wrong to do so: There’s no comprehensible rationale for forcing the Wolfpack to compete in a play-in regional.

Still, North Carolina State is a heavy favorite in this meet. The Wolfpack’s season high and average scores are almost a full point higher than the Broncos’ while the NQS differential is around half a point. That’s enough to make this an extremely uphill battle for Western Michigan, but the Broncos will undoubtedly have a great time just getting this far. And if there are falls, anything could happen.

There are two scores in the live score already but I’ve been here since 3 and didn’t see routines?? Anyway, there’s also no audio.

Petrousek (WMU): Toe on to Maloney, major leg separation, toe on to bail with minor leg separation on the catch. Not emphatic on the cast handstand positions, blind full double pike stuck-ish. 9.775

Murphy (WMU): Hop change to half to Deltchev, too far and falls. Tishkoff apparently fell in the phantom lead off routine, so the Broncos have problems now. Back on for a Rudi dismount.

Hunter (NCSU): Yurchenko half with big leg separation and a hop. 9.6

It’s been awhile since the Broncos put together a clean bars rotation and they continued that form today, counting a fall early on the rotation. N.C. State was nothing special either, but vault is never a strong event for the Pack.

Harrison (WMU): Slight pike throughout on FTY but major amplitude, hop back. 9.725

Nelson?(NCSU): Tkachev, a bit of knees going in, toe on to bail to toe hecht. Blind full double back with a small hop.

Thomas (WMU): Piked and feet throughout on her FTY, hop in place.

Moravansky (WMU): FTY with a huge hop back.

I missed a NCSU bars routine 🙁 It’s so hard to track what’s going on with no audio.

I’m so sorry Western Michigan, I have absolutely no way to ID your vault people and these might all be wrong.

Shepard (NCSU): Blind, great turnover on her Jaeger, fantastic Pak. The form on these Paks is absurd for NCAA. FTDB with a little hop.

The Pack kicked into high gear here with a 49.325 on bars that ranks fourth in program history. Western Michigan was fine on bars but nothing special and the lack of polish is allowing N.C. State to run away with this… as it arguably should.

Nelson (NCSU): Switch switch side. There was an acro series somewhere in there, I’m still getting acclimated to the split screen clearly. Side aerial back full stuck-ish. 9.775

Foland (NCSU): Kickover front, swims and falls. Switch split, good positions even from an end-on angle, kickover front BHS BHS tentative but got there. BHS one and a half twist. 8.875

Harrison (WMU): Double back, shifts the front foot. Front lay front full, pretty twisting with her arms over her head. Switch side Popa, strong positions. Double pike almost goes OOB but she kept her heel up and saved it.

Shepard (NCSU): Got iced while the judges (probably) tried to figure out whether to credit Foland’s acro series. L turn, switch straddle quarter is so lovely. It’s the little things, you know. BHS LOSO emphatic. Side aerial. Beat split 1/2. Side aerial back full. Stone cold. 9.85

Cox (NCSU): BHS LOSO, tentative but gets the back foot onto the beam. Switch tuck 3/4. Another leap I missed, gainer full off the side stuck. 9.7

Murphy (WMU): Round off direct to double back, bit bouncy. Rudi to straddle is lovely. Her performance quality is a tangible upgrade over the last ones. I don’t know how she rotated that double pike but we did. 9.9 well deserved.

The Broncos made up some ground after a great floor rotation while N.C. State was just okay on beam, but this is still firmly in the Pack’s hands with a good event to go.

Binstock (WMU): BHS LOSO, grabs the beam and falls. Major check on the full turn. Switch half. One and a half twist with soft knees.

Jordan (NCSU): Overpowered front double full, one and a half front lay. Tour jete half split full. Super dramatic music and I’m a huge sucker for that sort of thing. L turn, Rudi with a bit of extra bounce. 9.85

Petrousek (WMU): Wolf turn, awkward, BHS LOSO with a lean and mediocre extension. Hitch kick side aerial beat. Sissone to tuck jump full, side aerial back full stuck. Good recovery. Conference on her score, not sure what’s up.

Thomas (WMU): Kickover front, split split half. I think that was a side aerial back full dismount? Could be wrong. 9.85

Benson (NCSU): Round off double pike. This meet is not big on BHS, is it. Huge switch side Popa with flexed feet. One and a half front pike. Popa wolf full underrotated and awkward. Double back. 9.8

Nelson (NCSU): Two and a half twist! Double pike, chest slightly low. One and a half front pike.

Moravansky (WMU): BHS LOSO, touch of knees but landed very well. Side somi, check. I think that was a standing LOSO to pike jump? BHS one and a half twist chaotic and way out to one side, cross step.

Shepard (NCSU): Great double pike, tour jete half split full. Bigger step on the front lay front full but great control. Fantastic double back. 9.9 is good for a 39.500 in the AA, good for her!

Negrete (NCSU): Again with the high drama music. Double pike, great rotation on the leaps, front full front lay, switch half split full. Lots of double leap series for the Pack. Baby hop back on the double back, she tried to stick it.

Wow. Bittersweet for the Pack: This is a phenomenal score and one that could absolutely put Illinois in danger tomorrow… if it’s repeatable on consecutive days. But that’s a big, big ask and if N.C. State ends up peaking here and then fatigue holds it back tomorrow, it would be a disappointing way to end the season. Today was really incredible, though. 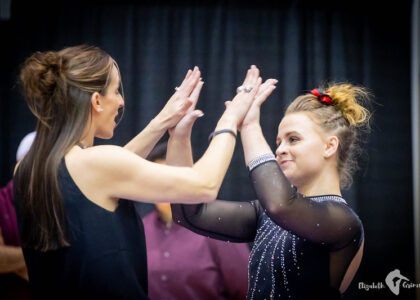 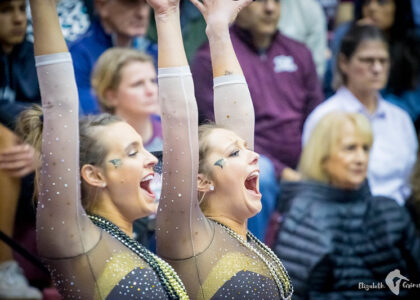