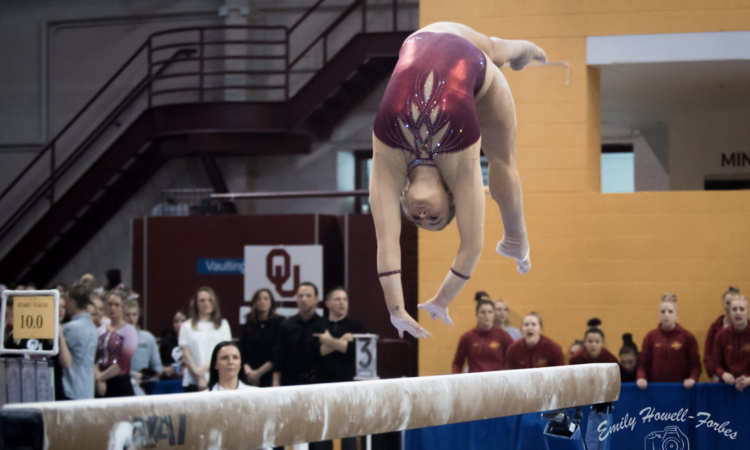 The Iowa State Cyclones’ head coach Jay Ronayne isn’t shy when it comes to singing his athletes’ praises. “I love to brag about my team. It’s my favorite subject!”

This confidence has been hard won. There was a period not too long ago that Ronayne refers to as “the dark years,” which saw the Cyclones struggle both behind the scenes and competitively, culminating in the team’s failure to advance to regionals for the first time during his tenure.

“There was a slow erosion of our culture that was going on,” said Ronayne, who recognized the need for a dramatic overhaul within the program. “I knew this team was hungry for success, but we needed to reinvent everything. Everything we do here and beyond had to be different than what we did prior.”

One of those key changes was implementing a completely new recruiting strategy.

In 2016, the majority of the top gymnasts being recruited around the country were in their freshman and sophomore years in high school. Ronayne thought about what might attract them to a particular school, which teams are in the top 10.

“It wasn’t Iowa State! We would never get in the door with those kids,” he said.

So he changed his mindset and looked at recruiting from a different perspective.

“Who are the kids who are juniors and seniors in high school and looking at [NCAA gymnastics programs] freshly for the first time, who don’t have any preconceived notions? International students.”

Ronayne now had the solution, but no idea how to get there. That’s where Nilson Medeiros Savage came in.

The Brazilian native had over a decade of coaching experience within the Big 12—serving as an assistant coach at both Oklahoma and Denver—as well as a vast network of international connections cultivated during his 30 years as an elite coach. Even more importantly, he was interested in the job opening at Iowa State.

The hire certainly seems to be working. Four years later, the team has steadily climbed the national rankings with no signs of slowing down, and Medeiros Savage is pulling double duty as the Cyclones’ associate head coach and recruiting coordinator. Over half of the team’s roster is from outside of the U.S., representing six countries, and former elite Sydney Saturnino will join next season as the team’s first Italian recruit.

So how do Ronayne and Medeiros Savage convince athletes from all over the world to come to the quintessential U.S. small town of Ames, Iowa?

“They don’t look at a travel brochure and say, ‘Wow! That’s a location!’” Ronayne said. “We sell them on the experience. A top-notch education, a great gymnastics experience with some of the best coaching possible, and from there you’re gonna have something you’ve never experienced.”

For sophomore Jade Vella-Wright, a bars specialist and former Australian national team member from Melbourne, the Iowa State experience was well worth moving halfway across the world for.

“I knew several gymnasts who competed in college and loved it. I had the opportunity to come visit a couple of times, and I loved the campus and the staff and the team. Everyone is so supportive.”

While not an international student, junior Addy De Jesus was similarly sold on the new Iowa State culture. After a fraught and highly public transfer process from the University of Nebraska, De Jesus is having the best season of her career—including a perfect 10 on vault—as the team’s sole all around competitor.

“It’s an honor to do the all around for this team because I didn’t know if I’d have that opportunity again,” she said. “It feels so good to have found a home and a family here.”

That family feel is certainly captured by the team’s chosen motto, “Better Together.”

“Every person that joins our team or leaves our team changes the dynamic, but the culture now remains the same. That’s what we’ve cultivated. That has made the major difference,” Ronayne said. “It’s happened organically over the years, but everyone is still very hungry for success.”

The gymnasts don’t hesitate to talk about that hunger and drive, either. De Jesus hopes to earn first-team All-American honors on vault this season, and she and Vella-Wright both think the team will make waves during the postseason, a sentiment Coach Ronayne echoes.

And though the timeline has been affected by the pandemic, the team’s ultimate goal of appearing at the national championships remains unchanged. “We don’t know if it’s going to be this year or next year or the year after, but at some point it will happen.” 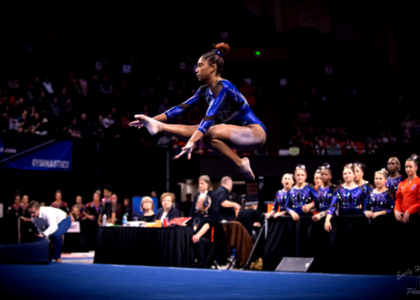