As the top-rated gymnast in the class of 2022, as well as a former elite, a level 10 national champion and a Nastia Liukin Cup qualifier, Selena Harris was on the radar of some of the top teams in the country. Her commitment was also a source of speculation among fans, fueled in part by Harris herself, who in the past posted photos on Instagram mimicking Utah’s “U” and attending LSU’s summer camps.

Figuring out which college she would continue her gymnastics career was not easy, Harris admitted, but when in the end she chose UCLA, everything seemed to fall into place. She came to love the team’s energy, as well as the coaching staff. “They care about me as a person before the athlete,” she said. “It’s really important to me that they can separate the two so well.”

Additionally, Los Angeles is quite close to Harris’ hometown of Henderson, Nevada, and UCLA boasts excellent academics, which will help her set the foundations for her post-gymnastics career; she wants to become a physician assistant.

Her commitment to UCLA was “a waiting game,” Harris said. After the forced break from gymnastics in the spring of 2020 due to the COVID-19 pandemic, patience became key, as she slowly gained back her skills, waited to see if there would be a gymnastics season in 2021 and decided which college she would commit to.

“It just took a lot of time and patience,” Harris said. “But I’m glad it did because I’ve accomplished one of my biggest goals, that is, to get the opportunity to be a part of UCLA. It was such a big relief and such a wow moment for me because I worked so hard.”

Harris began to make a name for herself in 2017, when she became the Junior A national champion on vault with a stuck Yurchenko 1.5 and later qualified elite on her first attempt. To date, these are the two gymnastics accomplishments she is most proud of.

She competed elite for two years, qualifying to the U.S. championships both times, but after failing to make the national team in 2018, she decided to drop back to level 10. “I decided to save my body, enjoy the rest of my J.O. years and be the best I can for my team in college,” Harris said.

Her choice paid off, as Harris had brilliant seasons both in 2019 and 2020. She was the Nevada state and Region 1 all around champion in 2019 and won silver medals on vault and bars at nationals later that year. In the shortened 2020 season, she qualified to her first Nastia Liukin Cup where she finished third on vault.

She’s not done accomplishing things in club just yet, as Harris is hungry for more in the year and a half of club gymnastics she has left before joining UCLA for the 2023 season. She hopes to stick her Yurchenko 1.5 on vault again and to win a national all around title, as well as post a couple more scores over 39 to add to the three she already has from 2019 and 2020.

Once her club career is over, she looks forward to starting a new chapter of her life at UCLA. She hopes to continue to compete some of her favorite skills in college, including her triple series on beam and her Memmel to illusion turn on floor, as well as show off her dancing ability. “What I am most looking forward to at UCLA is the floor party because I love to perform,” Harris said.

UCLA is certainly the right team for Harris to display her love of dancing, as the Bruins are known for their choreography and have boasted six viral floor routines in the last six years.

Harris hopes to add a personal input to her collegiate routine, as she herself choreographs floor routines at her gym. “I just love making up routines,” she said. “I’m super excited to be working with BJ Das because she’s absolutely amazing, and I love everyone’s routine on the team.”

READ THIS NEXT: Selena Harris Commits to UCLA for 2023 Season 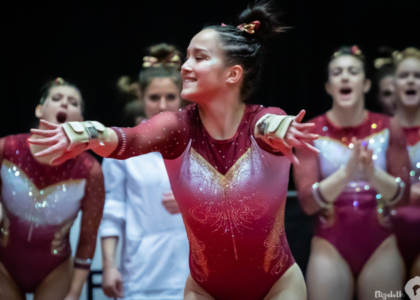 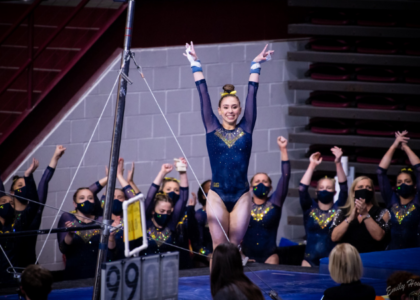