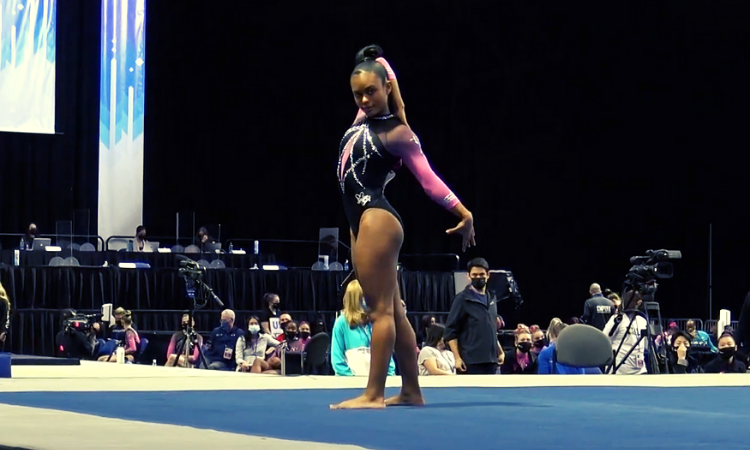 We expected a high-caliber competition at both the senior and the junior level, and the Nastia Liukin Cup did not disappoint.

Washington signee Leah Smith, a 4-star recruit training at WCC, won the senior title in her final year as a club gymnast with a near-perfect competition (38.800). Smith started off her day with a flared Yurchenko full on vault, and went on to post the highest score of the day on bars (9.850) and hit one of her strongest beam sets. Beam is Smith’s weaker event, so when she nailed her routine, which included a double pike dismount, and took the lead going into floor, which is her best event, victory was in sight. Smith closed the competition with a fantastic floor routine, which she opened with her impressive full-twisting double pike and dismounted with a beautiful double pike, to win the title. “This is such a dream,” Smith wrote on her Instagram Story.

Washington, which congratulated Smith on her victory, is struggling with depth this season and will be delighted to welcome Smith in the fall.

Alex Theodorou, a 3-star recruit from Desert Lights, was second with a 38.550. The Arizona State signee, who was the highest qualifier, had a super consistent competition, scoring a 9.675 on floor and three 9.625s on the other three apparatuses. The Sun Devils will lose some important gymnasts to graduation this year, including Cairo Leonard-Baker, but they will find in Theodorou an outstanding new freshman, as well as one of the best ever athletes on their roster. Theodorou’s gymnastics has a retro flavor, especially on vault and floor, that is exquisite to watch, as well as some beautiful lines on bars.

Alabama signee Lilly Hudson, who trains at Florida Elite, was third with a 38.500 and first on beam with a 9.675. It was a delight to see her compete, as recent videos of her gymnastics have been sporadic. Hudson performs very clean gymnastics that will help the Crimson Tide a lot next year. Her front layout to front double twist on floor was a beauty.

2024 graduate Lexi Zeiss, from Omaha, who also competed elite at the Winter Cup this weekend, stuck her Yurchenko 1.5 on vault for fourth place in the all around (38.450), while Michigan State commit Nikki Smith, a 3-star recruit from Euro Stars, was fifth (38.375). Smith performed a beautiful floor routine, opening with a huge full-in, which could be a game changer for the Spartans. She and 2021 graduate Skyla Schulte are set to become stars in East Lansing.

Missouri’s future also looks bright, as 2021 graduates Jocelyn Moore, a 3-star recruit from Arena, and Amari Celestine, a 5-star recruit from SCEGA, finished sixth (38.350) and seventh (38.300). Moore had a truly impressive performance, sticking her Yurchenko 1.5 for a 9.925, the highest score of the competition, and a double layout on floor. Celestine struggled a bit and competed only a Yurchenko full on vault, but her gymnastics remained impressive, in particular her full-in on floor. Moore and Celestine could anchor Missouri’s vault and floor lineups from their very first meet next year.

Kylie Coen, a 2023 graduate from Empire, finished eighth with a clean performance on all four events (38.200). She was especially impressive on floor, where she competed three difficult passes: a full-in, a front layout to front double twist and a whip to 2.5 twist. Her choreography was also one of the most original, intricate and better executed of the meet.

In the rest of the senior field, Oklahoma signee Moorea Linker from La Fleur’s had an unfortunate fall on beam but impressed on the other events. Her Yurchenko 1.5 is ready to make the Sooners’ lineup and so is her difficult floor routine, which includes two E tumbling passes and already has a KJ Kindler flavor. Kudos to her for cleaning up her gymnastics recently, it will make a big difference in college. 2023 graduate Chloe LaCoursiere, who trains at Coastal, continued to impress on bars (9.800) after scoring a 10.0 earlier this year, while West Virginia commit Miranda Smith showed off two acrobatic series on beam: a back handspring to layout to two feet and a layout stepout to layout stepout.

2025 graduate Alicia Zhou, who trains at Love Gymnastics and was the second highest qualifier, won the junior title with a 38.375. She posted the highest scores on both bars and beam with two exquisitely executed routines.

Avery Neff, a 2024 graduate who trains at Olympus, was second with a 38.175. She showed off mature performances on all four apparatuses and posted the highest score on floor for a beautifully choreographed routine, which began with a front double twist to punch front and had impressive twisting form throughout.

Gabriella Van Frayen, in the class of 2025 from Gym-Xtreme, was third (38.075) with a well-balanced performance and impressive lines especially on beam for a routine that included a triple series and a double tuck dismount.

Nina Ballou of American Twisters, who was the highest qualifier, and CJ Keuneke of Active Athletics tied for fourth place (38.025). Ballou did not compete her big Yurchenko 1.5 but impressed on the other three apparatuses, especially on floor, where her mimicking the sign of the crown on her head at both the beginning and the end of the routine said it all. Keuneke also stood out on floor, where she competed a front double twist to front pike and a wolf turn with the back leg in attitude and showed off a pretty choreography.

2025 graduate Mackenzie Estep was sixth with four solid performances (37.875), 2024 graduate Danielle Ferris of Florida Elite was seventh (37.675) and Lauren Harkins of JPAC, in the class of 2025, was eighth (37.600). Ferris posted the highest score on vault for the only Yurchenko 1.5 of the junior competition. She performed it beautifully and nearly stuck it.

Additionally, in the junior field, 2025 graduate Madelyn Dorbin of Georgia Elite tied for first place on floor for an impressive routine, which included a full-in mount and huge leaps. On bars, we finally got the chance to see JPAC’s Bailey Stroud’s routine that scored a perfect 10.0 a few weeks ago and it was worth it. It included an Ezhova, a Maloney to Pak salto and a double layout dismount.

Senior Morgan Price, a 2023 graduate from Texas Dreams, showed off the best choreography and musicality of the competition on floor, while the queen of elegance was junior Azaraya Ra-Akbar, a 2025 graduate training at World Class, who had superb lines on beam and floor. Finally, Ballou’s enthusiasm reigned supreme, we cannot wait to see her celebrate after sticking her first landing in college in a few years! 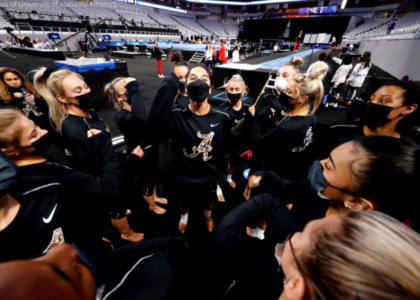