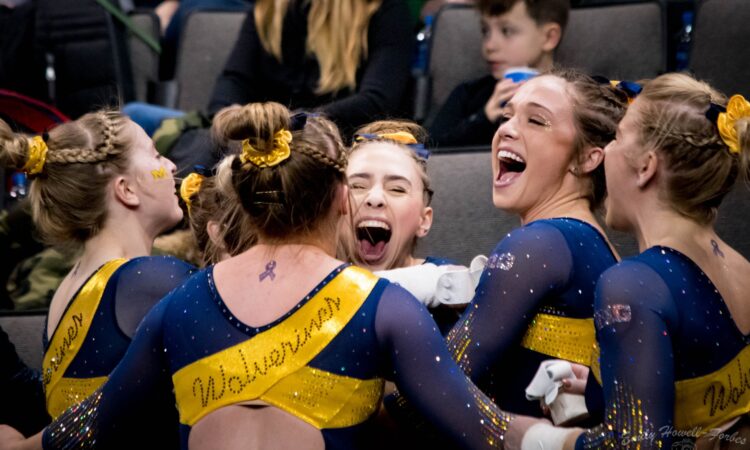 Yes, I know that’s four teams. Yes, I can count.

Michigan State withdrew from this meet on Thursday due to COVID-19, leaving the Spartans with just five meets in the whole season. That’s undeniably unfortunate, but the Spartans were likely to end up in the afternoon session of the conference championship anyway, so this particular meet isn’t incredibly consequential.

Michigan will be unranked next week no matter what due to a quarantine-induced dearth of road meets, but the bright side is that with a home meet 197.375 available to drop, today carries minimal NQS or qualification stakes for the Wolverines. Not so for Rutgers, whose highest and lowest presumptive NQS scores are over three points apart. With Belle Huang and Hannah Joyner kicking into high ear as some of the yikes-ier routines leave lineups, Rutgers once again has a chance to qualify to regionals.

Of course, Michigan’s major rival at this meet is Iowa, which has a major weapon in its No. 1 floor rotation but shouldn’t be underestimated on bars or beam either. If the Hawkeyes can get their vault landings under control, they’ll be truly terrifying. It’s easy to write Penn State off as a lovely but inconsistent team this year, but its vault lineup is robust and it could easily sneak in if things get rocky with the top teams.

Zanella (RU): Double pike, I think that was a back double full? Tour jete half split full, front lay front full with a big lunge. 9.625

Tolan (Iowa): Blind to Jaeger to overshoot, little leg form issues and not tons of amplitude, blind full double back low-ish but stuck. 9.85

Steffensmeier (Iowa): Blind to pike Jaeger, great, lovely Pak. Has to keep casting to handstand on the low bar to do a half turn. Blind full double back with a hop back. 9.7

Kaji (Iowa): Blind to Jaeger, great, Pak with leg separation to switch kip. Double lay with a hop back. 9.85

Johnston (PSU): BHS LOSO very solid. Split to sheep, nowhere near position, side aerial. Little check on full turn, one and a half lock-legged but close to stuck. 9.875

Cross (PSU): Double stag handstand to BHS LOSO is lovely. Split to sheep, another super iffy sheep position, kickover front to beat. One and a half with leg separation, stuck. 9.9

Newman (RU): Double pike, two steps back. Double back overcooked with a hop forward. One and a half to… It was meant to be a front lay, unclear whether it was laid out enough to get credit. 9.475 yeah nope

Rushlow (PSU): Missed the leaps, BHS LOSO good. Switch to split. Fell, unclear on what. One and a half stuck. 9.325

Huang (RU): Front double full, solid I think but I couldn’t see her feet. Rudi LOSO good, switch side wolf full and actually holds the landing for a moment before lunging. True sticks on leap passes are like unicorns. Rudi. 9.85

Great season high for Penn State there on an event that has been a little fragile. The Nittany Lions have made a number of lineup changes on this event through the season and appear to have found the winning formula.

For Iowa, a bars score in line with what we’ve seen so far this year, and Rutgers gave just a little away on floor.

Newman (RU): Twisting onto the table and flings her FTY out, step back. 9.675

Henderson (UI): Full turn, BHS LOSO with a slight check, cat leap switch side. Crashed her double back but walked away. 9.05

Castle (UI): BHS LOSO, small lean, falls on her punch front. Cat leap switch side, one and a half with a hop. 9.1

Nick (UI): BHS LOSO, cat leap front aerial beat, switch split. Looking super solid! One and a half with a hop. Great response from the freshman in a tough situation. 9.8

Killian (UI): Missed some of this in the Brenner situation but she hit with a good double full to finish.

Kenlin (UI): Switch split, front aerial to beat using her arms to adjust. One and a half twist with a baby hop. 9.9

Koulos (UM): Switch full great, two and a half twist lovely, just a small step. Double pike looks overcooked but she keeps it within the lunge, switch half wolf full. One and a half front lay. 9.825 is lower than I’d have gone.

Brenner (UM): I think she blew her Achilles on her full in 🙁

Wojcik (UM): Double pike, great. One of those times the commentator says it’s stuck while looking at an obvious lunge. Got lost on her second pass and fell, I’m just glad she’s not injured. Rudi to straddle pretty. 9.05

Brooks (UM): Overrotates the FTDB, a bit bouncy. Front through double back, tour jete half split full, double pike under with a step forward. 9.75

Wilson (UM): Half in half out lovely, front full front lay and dances out, I think that was the switch side half Popa, double pike overrotated and runs out of bounds and falls. What?? 9.1

Morrison (UM): Couple steps forward on her lovely one and a half. 9.85

Brooks (UM): Stuck her one and a half, just pulled the feet together. That might go ten, legitimately. 9.975 okay

Drauss (RU): Blind to Jaeger, a touch close and shy on a cast handstand, solid Pak, blind full double back with a hop. 9.675

Newman (RU): Hindorff with foot form, missed a handstand badly, clear hip to bail, empty swing on the high bar, half turn to double back with a step. 9.7 is too high.

Karolewski (RU): Clear hip BARELY makes it over the bar, she was stuck on the handstand for a few seconds, Ray to bail solid, double lay with a step back. 9.825

Bladon (PSU): Double pike, switch half wolf full with iffy positions, one and a half front lay with major leg form. Cowboyed double back, step OOB. 9.325

Ayers (PSU): Front through double back, switch side Popa. Chest down on the double pike, wolf full wolf full underrotated. 9.525

Rushlow (PSU): Bit of a rebound on her double back. One and a half front lay with messy legs, Rudi to… split? Didn’t really get the rebound there. 9.55

Allen (PSU): Double lay, looked like she had it and then stumbled, three or four steps and marginally stayed in bounds. Switch side Popa, front through double back. 9.65

Astarita (PSU): Open double back, fantastic, great one and a half front lay. Switch side Popa. Double pike solid.

Cross (PSU): Another piked throughout but stuck. The landings are ridiculous. 9.8

Brooks (UM): Blind to pike Jaeger, great, hitting handstands. Toe on to bail, FTDLO up on her toes, fake stick. 9.9

Wojcik (UM): Toe on to Deltchev, the usual, double lay with another fake stick. Clearly behind her feet but making it work. 9.925

Drauss (RU): Bend check on her switch half, full turn, missed the rest in the chaos. 9.625

Joyner (RU): Full turn lovely, BHS LOSO with a check. Switch ring switch half is good, side aerial back full. 9.85

Killian (UI): STUCK the triple. Super control on her double back. 9.875

Greenwald (UI): Full in, overrotated with a step back, two and a half punch front with a touch of form. 9.85

Kaji (UI): Okay, now vault and bars are over I have a little more time for floor. One and a half through double back is excellent. Slight scoot on her double pike. 9.875

Guerin (UI): They didn’t show the full in, which is nice. Switch side Popa straddle, front through double back excellent. 9.9

Henderson (UI): Great control on the full in, switch side Popa straddle is great. Solid double back. 9.875

This is very close with Michigan on fire, Penn State going to a great event and Iowa going to a weaker one.

Kenlin (UI): FTY, pretty much stuck and bigger than the last two.

Guerin (UI): Low chest on her huge FTY, just flung it out a touch.

Killian (UI): Big and pretty FTY with a little hop.

Henderson (UI): Stuck the FTY in the anchor. Couldn’t have asked for any more from Henderson today. 9.925

Johnston (PSU): I pretty much just saw a Maloney here.

Romagnano (PSU): Maloney to Pak, form on the Pak, toe on to stalder to double back with a step. Imprecise handstands throughout.

Cross (PSU): Blind to Jaeger, blind full double back with a step. Good control on that routine. 9.825

Verdeflor (PSU): Blind to Jaeger superior as usual, her handstands are so so good, bail. Blind full double back planted.  Should go high. 9.95 trust.

Rushlow (PSU): Blind to Jaeger, close and awkward, overshoot low. Blind full double back with a scoot back.

Bauman (UM): BHS LOSO, check on a leap, switch to split. Check on the side somi, side aerial back full stuck. 9.85

Wilson (UM): Cat leap, BHS LOSO great. Switch side is lovely, her straddle are superior, tiny check on a full turn. Step back on the double tuck. 9.875

Brooks (UM): Nailed the BHS BHS LOSO, switch switch looks too easy for her, full turn. Teensy adjustment on a kickover front, double back with a little hop. 9.95

Wojcik (UM): Front aerial to beat, switch split, BHS BHS LOSO with a check. Full turn, one and a half stuck. She looks mad. 9.9

Heiskell (UM): WE CAN’T WATCH BECAUSE THE STREAM DIED

The stream cutting off at the end there is just so freaking annoying when it was SO exciting. Screw you, BTN+.

Super clutch day from Penn State apart from floor. Vault is never going to be a true strength with so many technical issues but getting the landings makes it much less of a weakness. Iowa and Michigan both roared back from early disasters with scores that would have likely led to a season high had they happened in another week. For Michigan, at least, that’s no great tragedy since what it really needs is road scores for NQS. For Iowa, a win today is great news but a 197 remains elusive.