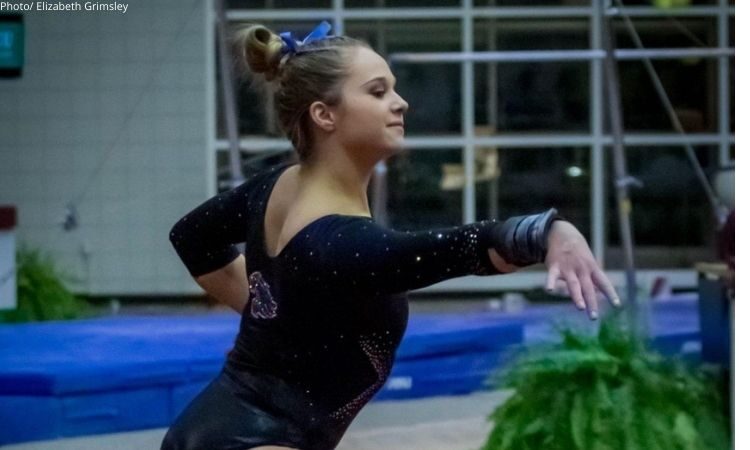 The senior night meets have begun, and tonight Kentucky will be honoring its senior class, which includes Madison Averett, Mackenzie Harman, Megan Monfredi, Allison Snyder and Ella Warren, at the start of this competition. None of these athletes have seen action yet this season. Ella Warren is not actively training according to the Kentucky SID.

LSU had a disappointing loss last week to Alabama and needs to amp up the execution to keep-up with its rival Florida. The Tigers are on a two-meet losing streak and angry gymnastics might just make an appearance tonight. Reagan Campbell was absent from last week’s competition with an injury and Kiya Johnson has not returned to floor.

Kentucky had a solid showing against Florida and seems to have settled on lineups for each rotation. However, it did not capitalize on the opportunity that was presented to it with Florida down athletes last week due to contact tracing. Kentucky showcased an impressive four 10.0 start value vaults but struggled to execute controlled landings. A solid score tonight will help its NQS ranking.

Ready to GEAUX in Kentucky!

Reagan Campbell will be available to go on beam for LSU tonight and Desiderio is scheduled to return to floor after having issues on her landings in competition. Bryant appears to be absent from the beam lineup for the Tigers.

We already have a change to those lineups. Bridget Dean will take the place of Chase Brock on bars.

Bunn (UK): FTY, beautiful in the air. She gets the stuck landing, but did land with her chest low. 9.85 Career High

Magnelli (UK): Front Pike Half, soft knees in the air with a hop back. 9.9 Career High

Patterson (UK): Front Pike Half, lacks distance and has to pike down a bit. Takes a large step back. 9.775

Angeny (UK): FTY. Does the full tonight and does it beautifully. She opened it up in the air. Small hop back. 9.9

Durante (LSU): Gorgeous handstand, Blind change to straddled jaeger,  looks more crooked than normal. Not even sure if that would be a deduction. Pak Salto, beautiful form in her FTDB, step back on the landing. 9.825

LSU will not be pleased with that rotation. Missed opportunities on landings with execution errors on form throughout the rotation. Kentucky put together a great vault rotation with career high’s from freshman Bunn and Magnelli. The Wildcats made the decision to compete two 10.0 start values rather than the four they competed this week. The decision paid off and they’ll take the lead after one

Durante (LSU): FTY, extremely under rotated and has to pike it down. Large lunge step forward and she puts her hands down. She crunched her ankle on the landing and looks to be in pain. 9.175

Davis (UK): blind full to blind half to jaeger, bail handstand, dlo, legs glued together in her layout, step back. 9.775 Career High

Shchennikova (LSU): Y1.5, This vault is her best piece of gymnastics. Good execution with a stuck landing. 9.95 Career High

Kentucky is having a night!

LSU was able to get themselves back in the competition after Shchennikova stuck her Y1.5 following a fall from the lead-off performer.  LSU’s 49.625 on Vault is the second best score on the apparatus in the nation. With that milestone, LSU was able to make-up ground on Kentucky. Kentucky was lights out on bars with 4/6 stuck landings and beautiful handstands.Nixon was rewarded with a 10.0 from one judge, but ultimately settled for a 9.975.

Desiderio (LSU): Double layout, good, 1.5 to front lay, under rotates the layout and takes a step back, Switch ring, tour de jete half, Double tuck. Doesn’t quite get the rotation fully around but crunches her ankles for a controlled landing. 9.9. That’s a little high IMO.

Ballard (LSU): DLO, nicely done, RO 1.5 to front lay to stag jump. switch ring to switch half, double pike, chest is low on the landing but better than the past few routines for LSU. 9.85

This just coming in: Bunn, Worley and Dunne have had an increase on their bar routines by 0.25. This extends the lead for Kentucky.

Bryant (LSU):fhs double front, on the larger side of a controlled step, Front lay to rudi, nicely done, I love her loso as apart of her choreography. Switch side, ½ popa, Fhs double full, well done. 9.95

Jay Clark is giving Bryant a mental break from the all-around which is why she will not appear on beam tonight.

Wobbles on beam may put Kentucky behind LSU after the Tigers had an okay floor rotation. Rotation 3 wasn’t impressive for either program, but they were able to fight through the struggles. Kentucky hit five beam rotations after a lead-off fall and LSU pulled through despite landing errors.

Kentucky has scored season-high’s on its first three rotations of this competition according to the broadcast.

Hagis (UK): Rudi to back loso, she launches her loso but manages to stay in-bounce. Straddle Jumps, Double Pike, large uncontrolled step back. 9.825

Campbell has dealing with a sore hip.

Kentucky may have the meet with that fall from Campbell. LSU will need to count a fall on beam towards its score now.

Kentucky has pulled off an upset and will hand LSU its third loss in a row.

Kentucky will total a season high with a 197.100 and scored a season best on the vault, bars and beam rotations. The Wildcats were able to capitalize on open doors that were left behind by LSU. LSU struggled with landings on bars and beam and were unable to make-up enough ground on the other rotations to overcome counting a fall on beam.

Aloyna Shchennikova had solid meet for the Tigers and hit crucial routines after falls on both vault and beam. Worley will win her fourth all-around title of the season. 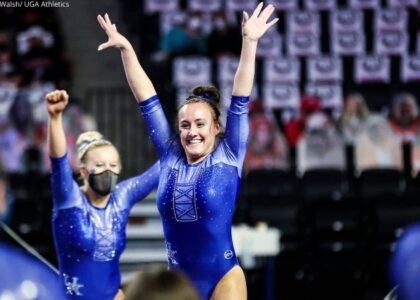