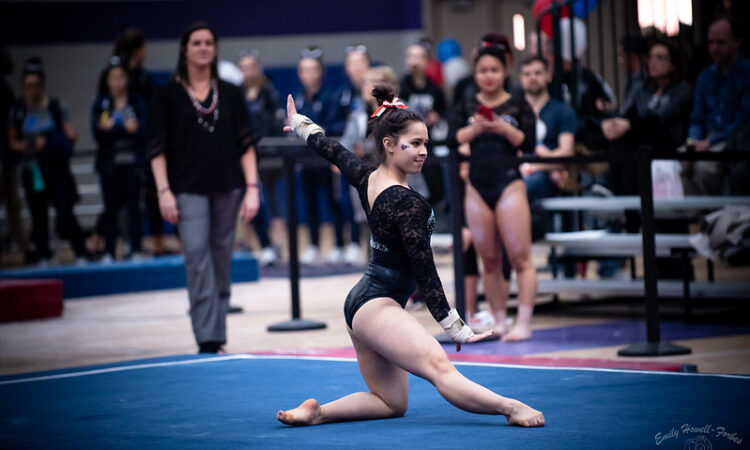 It was a quiet week in USAG gymnastics as severe weather in Texas led to Texas Woman’s canceling its meet versus Centenary. We did get an exciting upset in the Midwest: SEMO scored a season high to defeat No. 1 Lindenwood on the Lions’ senior night. Air Force competed against two MRGC teams and scored a season high.

With YouTube upload stalwart Texas Woman’s out of action, it also wasn’t a great week for finding videos for you to watch. If anyone has videos of Anna Kaziska’s meet-winning beam or floor routines versus Lindenwood, I am very interested in that!

A great vault rotation was the key to Air Force’s season high score this weekend, and Heidi Sand’s Yurchenko full led the group. Her 9.850 is the highest score by any Air Force gymnast on any event this year.

Lindenwood’s Aleah Leman has not been skipping leg day, and it paid under pressure when she narrowly managed to stand up her front double twist despite mistiming her punch. While she was still deducted heavily, her routine was ultimately counted, and she saved her team half a point compared to the dropped score.

The Big Storyline: Air Force notched a season high at this tri meet, which ended a long streak of road meets for the Falcons. The vault team registered a season-high total of 48.325—impressive with just two 9.950 SV vaults—while one low score was counted on floor, meaning that the Falcons should be able to break 193.000 with a fully hit meet.

Implications: With the no high score dropped rule in NQS calculations this year, Air Force will be very happy to use this score when NQS kicks in this weekend.

Records: Heidi Sand’s 9.850 on vault is the highest score by any Falcon on any event this season.

The Big Storyline: It was a tough senior night showing for Lindenwood, which had a respectable lead through three rotations only to miss all of its final three floor routines. SEMO on the other hand notched a season-best team total that would have beaten even some of Lindenwood’s better meets. The return of Jordan Jones for the first time in 2021 was key to a season high on floor, while Lydia Test also returned to contribute on two events after a two-week absence.

Implications: This lower score brings Lindenwood’s average score down one again, leaving the Lions narrowly hanging onto first place. It won’t matter next week, though, since NQS is about to kick in

Controversies: While Aleah Leman missed the punch into her front double full on floor quite badly and barely survived the encounter, she did both rotate the skill and stand it up (barely) at the end. The judges didn’t seem to know quite how to score it, leading to a lengthy conference and an eventual 8.500/9.000 judging split. There was also some fan consternation over Lindenwood beam scores, but a few slow series cost the Lions critical SV on that event.

Current Rankings: No. 49 SEMO at No. 40 Lindenwood

Why You Should Make Time to Tune in: With the USAG postseason looming, it’s key to know how these two MIC powerhouses match up. SEMO has been struggling for a few weeks while Lindenwood has been in cruise control with the exception of a minor beam catastrophe on Friday. The personnel links between these two teams also make the matchup compelling: One SEMO coach is a former Lindenwood assistant coach while the other is a former Lindenwood gymnast.

READ THIS NET: The Dismount: Week 7