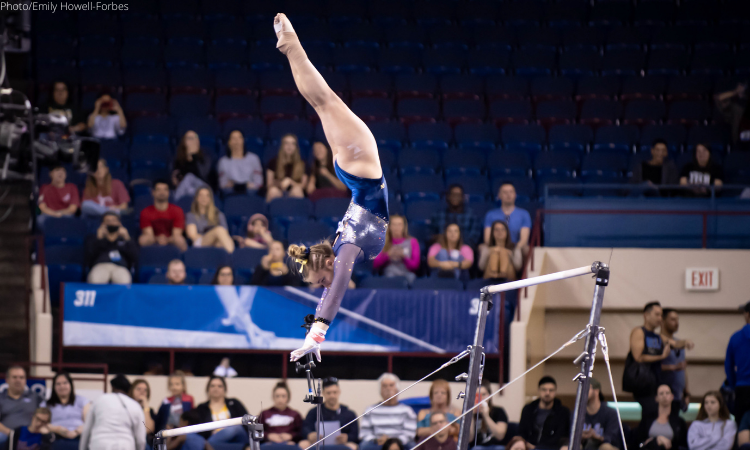 Michigan really didn’t miss a beat getting back into competition after its athletics hiatus. Its 197.650 last week has only been topped by Florida, Oklahoma and LSU this year. Because the meet was Monday, it isn’t reflected in Michigan’s No. 8 ranking. This meet matters a great deal to the Wolverines’ NQS because it will necessarily count when they debut in the NQS rankings after March 5—NQS debuts March 1, but Michigan will only have this one away meet as of that date. That’s right: this is our first look at Michigan on the road in 2021.

Illinois has improved its team total in every meet so far. It has nothing disastrous to drop before the March 1 switch, but would rather count as many 196 numbers as possible. It has two so far, and will want to close February with two more to debut with only 196s in its NQS.

Especially notable for the Illini is Arayah Simons’ floor debut last week. She notched a massive 9.950, and if she can replicate that performance, she’ll challenge the Wolverine lineup to take that event title. Beam will also be competitive, with both Mia Takekawa and Natalie Wojcik with 10.0s on the event in their careers.

Both teams have areas of work. Vault is Illinois’ weakness. The Illini will always be held back by start values, but maximizing amplitude and minimizing landing deductions should help boost that total. Anything over 49.000 is a success on vault. For Michigan, the beam lineup continues to be a touch shaky. Every other event shows postseason competitiveness, but the Wolverines can’t count on being buoyed by a Wojcik 10.0 every week. Having freshman Carly Bauman in this lineup (finally!) helps, but doesn’t solve every issue.

Oooo fun the stream started early! Looks like the teams are in the locker rooms, though, so no fun last minute warmup insights.

A fun fact: the Michigan men’s team is also in Champaign today. From Instagram videos it looks like they’re warming up in the training gym, and then Huff Hall will converted to its MAG setup for their afternoon matchup. Seems fun to have both squads in the same place!

I can hear our announcers double checking pronunciations, sounds like Townes will compete today.

Illinois will be a new leo today.

It’s the top of the hour and we’re doing march in, so my guess is first vault will be around 12:10 ET.

Waight (UIUC): Yhalf, some hip angle, the camera is in a bad spot, but didn’t look like a lot of distance. 9.75

Mariani (UM): She’s back after being pulled after warmups last week for Koulos. And I can see our bars judges are already slow. What is going on this year?! Clear hip hand to big Taktchev. Bail hand short and some leg form. DLO, stuck. 9.8

Biondi (UIUC): Looks like we missed her Yhalf, but it went 9.8. Oop we got a replay, some hips and a medium step forward.

Wilson (UM): Fairly certain we’re watching Illinois wait while Wilson is on the bars, but can’t say for sure because…we’re still muted. Love you BTN+. Oh okay here she goes, just slow judges. Blind to pike Jaeger HOLY MOLY so close, hits both ankles, somehow catches with one arm and tries to stay on but there’s no hope. Picks back up with the bail hand. DLO, big step back. Yeesh. 8.925

Townes (UIUC): Y1.5, on her feet! Some hips and knees throughout. We had sound of a hot second. 9.85, scores are a little loose but not goofy overall, on both events.

Brenner (UM): No way she doesn’t have a long wait with these slow poke judges and a fall and likely SV issue. Snack break! Bathroom break! Blind to Jaeger some soft knees immediate bail. Hips in her giants DLO, feet pretty far apart on landing but they might give her a stick. 9.875, she got that landing.

Brooks (UM): We’re waiting again! Gotta say, the vault judges are on point. Score is up before the video feed even switches over to bars. Blind to pike Jaeger soft knees. Toe hand to Bail hand, small arch on the catch. Great last handstand. FTDL, little off balance on landing, tiny hop. 9.875

Koulos (UM, exh.): Blind to Jaeger, some soft knees after the catch. Bail my ears exploded this sound is wild help me. DLO stuck. I bet wee see her in lineup next week. This one is competitive though so we’ll see.

Oh yay our sound is fixed! Thank you BTN+!

Illinois will absolutely take that. Vault is a weak point and anything adjacent is a win. Michigan had some weirdness it hasn’t this year, steppy landings and weird core tightness on bail catches. No 9.9s is weird for this squad, but a 49.300 is a fully acceptable number.

Folks! Star recruit and junior Mallory Mizuki is making her competition debut after consecutive ACL tears! She’s done some exhibition sets, but this’ll be her first that counts.

Heiskell (UM): Our announcer just said “Helinski” which is something. FTY, huge, flaired, little foot shuffle. 9.95!!! Holy cow. There was that shuffle but dang.

O’Donnell (UIUC): Blind to Jaeger. Bail hand. She has great extension and handstands. Blind 1/1 to high double tuck, step back. 9.775

Mizuki winning bars in her debut is really something. Against Michigan no less! The Wolverines look a little funky today. Just less precise than at home, but certainly no disasters.

Morrison (UM): Double pike, has too much leans back and picks up her front foot. Double tuck, over compensates after that first landing and lunges forward. Tour jete 1/2 popa popa, good splits hard to see the rotation because the camera panned during them which was trippy. Best landing on her combo pass. 9.75, those landings.

Mueller (UIUC): Bhs loso, solid. Switch to straddle 1/4, could use more split on the straddle, but no movement on the landing. Beat to front toss, great. RO 3/2, little low and she covers what would’ve been a hop with a quick salute. 9.725, probably that landing and split.

Koulos (UM): Tour jete 1/2. 5/2, gorgeous landing, great in the air. Double pike, another great landing. Tour jete to wolf 1/1, some rotational issues and could use stronger positions in the air, just a little sloppy. Fine on the combo pass, landed a bit on her heels but covered in in the lunge. 9.825

Biondi (UIUC): Bhs loso, solid. Illinois does. not. move. on these landings. Switch to double stag, little foot adjustment and some loose feet in the air. Side aerial. RO 3/2 hop forward. 9.8

Brenner (UM): Double tuck, little bit back on the landing. No full-in today. RO 3/2 to front lay was solid. Switch side popa, rotation issues on both. Double pike, excellent landing. 9.875

Wojcik (UM): Look I don’t know what Seven Rings is okay I’m old, this is just My Favorite Things to me. Double pike, good landing. Tour jete 1/2 to wolf 1/1, best jumps yet. FHS 2/1 to front pike, foot slide on the landing. FHS rudi to split. She took off weirdly on the rudi so it was a little low, but didn’t show any other issues. 9.925

Scott (UIUC): Front toss bhs, little adjustments on both landings, it was a great correction to make the bhs. Switch, slightly off, didn’t connect it to something though it looked like she meant to. Switch to double stag, there we go. Cartwheel stuck gainer 1/1. She covered well there, had to dismount on the other side and there was a quick smart mat adjustment. 9.8

Brooks (UM): Full-in oh wow stuck cold, no need to lunge on that. Front through double tuck, great landing, just feet in the air. Leaps were off kilter a bit in the air. Double pike, low chest and a hop forward. 9.85

Takekawa (UIUC): Side aerial bhs, good. She looks like she could do that in her sleep. Big switch to loso, best leap for Illinois so far. Bhs gainer 1/1 hop. 9.9

Ewald (Ill., exh): Loso loso, she comes off. Just off balance from the second takeoff. Switch, splits the beam. Not having a great go here. Repeats switch to one arm bhs, little check. Side aerial 1/1, hop. She’s laughing with Nadalie Walsh after that one.

Heiskell (UM, exh.): Good combo pass to open. Some wonkiness on her wolf 1/1. Double pike quite low chest and a lunge forward.

Michigan will absolutely take that 49.400. Again, there are some little weird things we didn’t see in Crisler, but that much is to be expected in its first road meet, and it is still on track for a solid 197. Illinois was weaker on beam than it is accustomed to. Some wobbles and a slightly off routine from usual stalwart Scott held back a few tenths, but this meet is going well overall for the Illini who are looking at another 196.

Mueller (UIUC): Double pike, slides back a bit in the lunge and feet in the air. Front lay front 1/1, lunges to the side a bit. Switch half wolf 1/1, rotation looked good. Double tuck, flexed feet but good lunge. 9.825

Wilson (UM): Hitch kick in her choreo. Bhs loso, wobble, but SO HIGH on the loso. Cat to Switch side, drops her chest. RO double tuck, landing was out of frame. Our announcer says step back. 9.825

Biondi (UIUC): Double pike, great chest on landing, hops into lunge. FHS front lay front 1/1, little flat but great body position. Leaps were fine on rotation, but wolf position was a little uneven. Double tuck, little uncontrolled into the lunge but she did her best to cover it. 9.85

Farley (UM): Bhs loso loso, good. She cut that triple series short last week. Straddle to straddle 1/2, short on both splits by a fair bit. 3/2 turn. Side aerial, solid. Gainer pike off the end, low and a little foot adjustment. 9.8

Noonan (UIUC): FHS front 2/1, great rotation and landing. FHS rudi, another great landing. Her front twisting air awareness is great. Switch ring to cat 3/2, cat position was not the true shape, but I doubt that’ll be deducted. RO 3/2 front lay. 9.85, probably some amplitude on the tumbling in the deductions.

Mariani (UM): Side aerial, little off balance. Split to straddle 1/4 was strong. Switch side. Bhs loso, way off line and she falls. RO 3/2, short and a big step back. 9.1

Simons (UIUC): She debuted last week for a 9.950. Let’s see what she can do here. Double pike, good landing. Wanted to pick up the front foot but held her toes down. RO 3/2 front lay, she has good amplitude. Switch side popa. Double tuck very low, came down hard on her ankles and knees. She’s in pain, they’re checking the floor for a dead spot. She’s being carried off. 9.15

Knight (UIUC, exh.): FHS front 2/1, messy in the air and a little chaotic on the landing. RO 3/2 front lay better landing, still some messiness in the twist. Switch 1/2 to wolf. Double tuck low chest. Caught them flash a 9.775

That’s a season high for Illinois. The Illini have improved every meet this season. The potential Simons injury really dampens it, she’s such a charismatic athlete and important on vault. Michigan will be frustrated with the little errors after such a clean outing at home on Monday. The steps, hops and little wobbles are going to be a focus going into Big Fives. That said, a solid 197 away number is always a win.