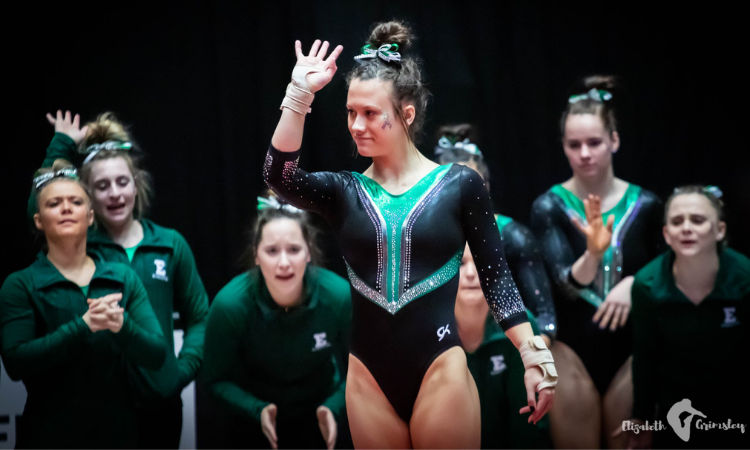 It’s time more people paid attention to the MAC, and I am going to tell you why.

There are currently four MAC teams sitting in regionals contention, and none of those teams are reigning conference heavyweight Central Michigan. This is especially exciting for Western Michigan because they are the only MAC team to have never qualified a full team.

Both the Broncos and the Eagles have had exceptional starts to their 2021 seasons, and this face off is all but guaranteed to be a close matchup. At the Eagles invitational two weeks ago, Eastern Michigan edged out Western Michigan by just over two tenths of a point; but this has the potential to go either way. The Eagles are strongest on bars and beam, while the Broncos are better on vault and floor. It truly could come down to who has the better day on their weaker events.

Individually, keep an eye on sophomore Payton Murphy for the Broncos; Murphy came very close to beating the reigning all around record (set by alumna Rachael Underwood in 2018) last week. Freshman Sarah Moravansky, who took the all around title last week with a career best 39.175, is another one to watch for the Broncos. For the Eagles, junior Caitlin Satler has been having herself quite a season, setting new career bests on beam (9.925) and floor (9.900). And I would be remiss if I didn’t mention senior Courtney Bezold, who is an absolutely stunning bar-worker.

Worth noting: At the Broncos meet against Kent State on Thursday, the Broncos scored above a 196 for only the fifth time in program history, and recorded a 49-plus on three of four events (last achieved in 2015).

Crossen (EMU): Bail to HS, short on that HS. Nice Tkatchev. DLO dismount with some leg sep but holds the stick. 9.800

Moravansky (WMU): FTY, looked a little piked – hop back. This camera angle is not ideal. 9.825

Parris (EMU): Piked geinger. Bail to HS was sharp. Finishes with a DLO, lands a little short and takes a step back.

Ludwig went before Rondeau, so that was weird.

Bezold (EMU):Full to jaeger to overshoot, lovely. Touch shy on the final HS. DLO hop back.  9.850

Exhibition on vault and bars.

Harden (EMU): … did they not show Harden? They seemed to start with bars. Okay they showed a replay.. front pike with a hop forward. 9.725

Parris (EMU): … did they not show Parris either? I am confused.

Okay they did not go in the right order, it looks like. FTY from Parris. 9.700

Olivier (WMU): Piked geinger, little leg sep. Bail to HS was lovely. Finishes with a blind full double back and a step back. 9.800

Harrison (WMU): all they showed of Harrison was her dismount, which was a FTDL and a hop forward.

I don’t know what is going on with the order of things here… seems to be a free for all. 9.825 for Harrison.

It feels a little bit like a free for all in terms of when athletes are going on each event, but its fine. Bring on the chaos.

Nice bar rotation for the Broncos, just shy of their season high. Little rougher for the Eagles, seemed to have a last minute lineup change at the end too for Rondeau (in place of Borris) so not sure what happened there. Western Michigan pulls ahead at the halfway mark.

Why are both teams competing simultaneously? This is needlessly chaotic.

Kosanovich (EMU): Leaps looked good…Double back with a big scoot back. That’s all we got to see. 9.675

Boris (EMU): I think we missed the opening of her routine too. Front full front lay, not a lot of height there but good landing. Finishes with a double back, lands chest a little low. 9.850

Seriously is someone in a hurry? I don’t understand why they aren’t waiting for beam to finish before starting on floor.

Crossen (EMU): I guess we’re going before WMU even starts on beam now. This is chaotic. Okay, lets see here – Opens with a double pike, big lean back, can’t tell if she’s OOB or not (weird camera angle). Front lay front full, little bouncy on the landing. Finishes with a double back, underrotated and lands in a deep knee bend. 9.700

Ok now we have Tishkoff: Leaps looked a little shy of 180. Beat jump side aerial, big bend at the waist. Side aerial full dismount, small step. 9.775

I would love to know why we are having two routines happening simultaneously during a dual meet, but that’s fine.

Career best score for Murphy on beam today, and the rest of the line up looked solid as well, minus a fall from Mamelka. Eastern had a great floor rotation, led by Rondeau with her 9.875. The final rotation will definitely make things close; beam is where the Eagles really shine and they have taken the lead back many times on this event in the past.

What order will we actually go in for this final rotation?! No one knows.

Parris (EMU): Switch leap switch side, looked a little shy of 180. BHS LOSO, good. Full turn showed good control. Side aerial, balance check but covers. RO 1.5 dismount, tries to hold the stick but leans forward and has to take a step to salute. 9.850

Petrousek (WMU): FHS front full front lay, not a lot of power I’m impressed she got that around to her feet. Finishes with a big double pike, big step back but holds control of the lunge. 9.675

Harrison (WMU): Big double back to start, nice. Front lay front full, runs out of it a little but but good otherwise. Good straddle positions on her leaps. Finishes with a double pike, too much power and leans way back on the lunge but keeps it in bounds. 9.800

Commentator said they are doing “block format” hence the routines happening at the same time.

Crossen (EMU): Front toss beat jump, good. Switch to sheep, would like to see head a little further back on the sheep. Nice gainer full dismount. 9.850

Rondeau (EMU): Cutting back to Rondeau now… RO 1.5 dismount stuck. Based on cheers I’m guessing the rest of her routine was great as well. 9.950 (career best!)

THIS IS CLOSE, WOW. Knew it would be, but still.