Both Arizona and Washington are young teams who started off the season a bit shakily and will want to put up a solid meet today. Arizona has the potential to score over 49 on all events but has failed to do so in competition so far. Freshman Jessica Castles did an exhibition routine on bars two weeks ago, and it was great. If she debuts on bars, she could stabilize that lineup a bit. The Wildcats’ goal will be to score over 196 for the first time this year.

Washington is in more trouble than Arizona, failing to score over 49 on any event this year so far and losing freshman Skylar Killough-Wilhelm on the leg events at least for the time being. The Huskies lost a lot of outstanding gymnasts at the end of last season, but they have the potential to perform much better than what they have produced thus far. Their goal will be to score over 195, which does not seem easy, as it is almost one point higher than their highest score this season.

Horton (Arizona): tucked Yurchenko full, a couple of significant steps back on landing. 9.675

Castles (Arizona): Yurchenko full, small hop back and chest slightly down on landing. 9.800

McNamara (UW): cast to handstand, blind half to Jaeger, loss of toe point, gorgeous cast to handstand, Pak salto with leg separation, blind full to double tuck dismount, slight adjustment. That handstand has been the highlight of the meet so far! 9.800

Hargrove (Arizona): Yurchenko full, she flares it but the chest is a little down and she has to take a little step on landing. She was thinking stick too soon. 9.825

Thompson (UW): cast to handstand, blind half to straddle Jaeger, bail to handstand, little leg separation, good final handstand, full-in dismount, she fights to stick it and gets it. Nice to see an E dismount! 9.850

After one rotation, it looks closer than we would have envisaged. Arizona struggled with landings on vault, while Washington’s bar rotation is finally gaining confidence and consistency. Will they be able to keep the energy up?

Thomas (UW): Yurchenko layout, a bit piked in the air and with a step on landing. 9.600

Hargrove (Arizona): cast to handstand, good, blind full to Tkatchev, over on the handstand, she stays on, bail to handstand, full-in dismount. That handstand mess will cost her nearly as a fall unfortunately. 9.350

Raskin (Arizona): cast to handstand, a bit short, blind change to Jaeger, bail to handstand, good final handstand, just a little arch of the back, front 1.5 dismount, small hop to the side. Both teams are bringing their A game now, very nice to see! 9.700

Thompson (UW): Yurchenko full, beautiful in the air, two small steps back. Ugh, she wanted the stick so badly, it was close! 9.825

McCabe (Arizona): cast to handstand, blind change to piked Jaeger, a bit of form, blind full to bail to handstand, a bit short on the final handstand, stuck double layout, leg separation in the air, though. 9.800

McNamara (UW): Yurchenko half on tuck off, hop back, solid vault and solid rotation for the Huskies. 9.875

Castles (Arizona, exh.): short first handstand, Maloney to Pak salto, short final handstand, blind full but she doesn’t get it all the way to the other side of the bar and she’s off. She repeats it, no problem, to double tuck dismount, step back.

Well, what an exciting meet. Both teams are showing their best gymnastics now, hopefully they will keep up the good work on beam and floor, too. Washington showed off some very pretty and diverse vaults, with Cunningham’s being the prettiest and Smith competing a 10.0 SV. Arizona finally figured out bars and, guess what, the Wildcats are good at it!

It’s also very nice to see Zaza Brovedani back after being out with concussion, she should be back in the bar lineup soon.

There are problems with the music, we’re waiting…

McNamara (UW): switch ring half, not super extended, Rudi to straddle jump, good, switch ring to switch leap half, 1.5 twist to front layout, loose legs on the layout, she loses her toe point on her final dance elements a bit. 9.800

Wickman (UW): front double twist, underrotated, straddle jump to straddle jump full, 1.5 twist to front layout, not the tightest form, front layout half, piked in the air, I assume it was supposed to be a Rudi. 9.300

Barile (Arizona): front aerial to LOSO, wobble, full turn with the leg at 180 degrees, she wobbles again but she fights on, switch leap to switch leap half, she drops her chest, side aerial to full twist dismount, chest down, step forward. This was a nervy routine, but she survived! 9.550

Judges’ conference over Wickman’s routine, it’s taking a long time but it’s understandable. They’re giving her a 9.7 SV, it seems.

Washington is not going for a sixth gymnast.

This was a disappointing third rotation after a sparkling start. Washington struggled with their rebounds on floor, while Arizona was completely off on beam.

Thomas (UW): full turn, tiny adjustment, front toss to BHS, beat jump, she stops, switch leap to straddle quarter, I guess the whole series was supposed to be connected, 1.5 twist dismount, she fights to stick it. She looks elated! 9.700

McNamara (UW): BHS + LOSO, nervy landing, switch leap half to beat jump, side aerial, she has to bend the chest significantly, side aerial to tucked full twist dismount, small step back. 9.600

Castles (Arizona): 2.5 twist to punch front, she fights to stick it, 1.5 twist to double twist, slightly overrotated, switch ring to switch leap half, best leaps of the competition there. Fantastic routine. 9.725

Hargrove (Arizona): full-in, hop back as she lounges, she may have stepped out of bounds, front layout to front full, big step forward, switch ring to switch leap full, way underrotated, it won’t be credited, double tuck, good landing. 9.825

Bowles (UW, exh.): beat jump to switch leap, wolf full, her foot slips but she stays on, beat jump to side aerial to full twist dismount.

Well well, the first half of the meet was impressive for both teams, while the second half turned into a mess. Arizona recovered a bit on floor after the beam disaster, enough to score just over 49 points. Washington continued to struggle on beam and failed once again to break into the 49s on any apparatus this year. At the beginning of the blog I said that Arizona would hope to break into the 196s and Washington into the 195s. After the first half of the meet, it seemed that anything was possible, for Washington in particular, which is encouraging news for the future. The second half of the meet, however, shows that both teams are still struggling to put a whole meet together. Washington will hope to have Skylar Killough-Wilhelm back in the all around soon, while Arizona will need a more solid Malia Hargrove to lead the team. 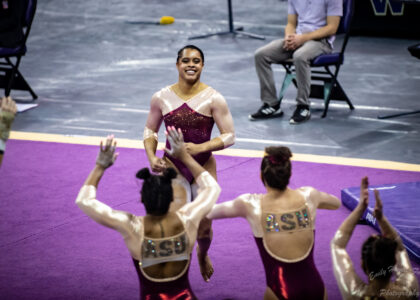