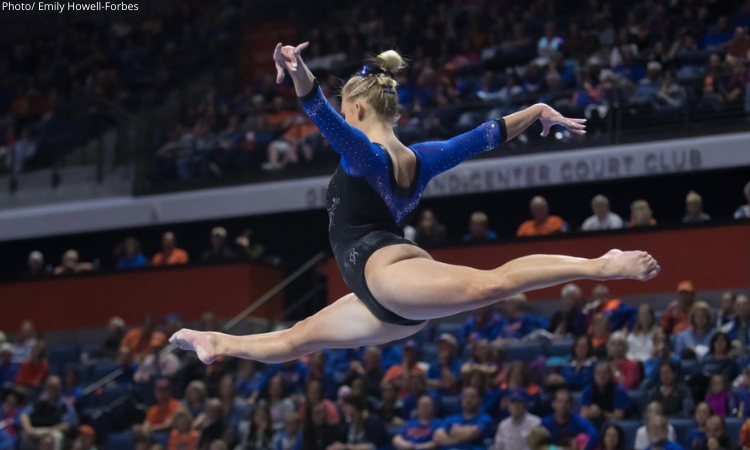 The Gators’ annual Link to Pink meet always brings highly executed gymnastics to the table. Expect nothing less from this one. Kentucky is creeping up in the rankings after two solid meets of consistent performances on beam while Florida is continuing its campaign as the No. 1 team in the nation.

Postseason is in sight, and many athletes have begun to incorporate upgrades as conference championships are just around the corner. An increase of E-level tumbling passes on floor and 10.0 SVs on vault could be a feature of tonight’s meet.

Florida’s head coach Jenny Rowland also indicated prior to the bye week that this could be Alyssa Baumann’s career debut on bars. The senior athlete has all around potential, but has not competed on vault or bars yet this season.

Kentucky has three all around competitors leading the team. Bailey Bunn, Josie Angeny and Raena Worley have been stellar for the Wildcats and have a chance to take home an all around title if the Gators stumble.

With all that knowledge, Alyssa Baumann making her debut in the all-around is very likely. This does give Florida the chance to test its lineup depth. However, the doors have been opened for Kentucky with an opportunity to overtake the No.1 team in the country.

The baseball game on SECN right now is only just entering its fourth inning. I guess it means its app launching time.

Alright sounds like the baseball game is getting moved to an alternate channel! The baseball game commentator did say he had a short stint in gymnastics that ended on bars.

The four athletes absent for Florida account for 37% of its routine, according to the ESPN SECN broadcast.

Bunn (UK): Good first handstand, blind half to jaeger, bail handstand, solid, her handstands are on tonight, DLO, Stuck. 9.725, actually expected that to be higher. Bunn’s score has been upgraded to a 9.775.

Baumann (UF): Just planning on completing the full. We get confirmation that she is scheduled for the all around title. FTY, messy legs and a hop on landing. 9.825

Richards (UF):  She planned on debuting the full tonight but with absences from athletes they played it safe. Really nice FTY. 9.85

Lazzari (UF): FTY, beautiful form in the air and sticks the landing.9.875

Skaggs: (UF): FTY, tries wayy too hard to stick it and bends at the hips. Takes a college salute forward that will most certainly have a large deduction. 9.775

Angeny (UK): Straddled jaeger to bail, glues her legs together on her handstands. DLO, looks like she took a hop. 9.775

Florida managed to get over 49.000 on that rotation despite not vaulting a single 10.0 SV. Skaggs’ anchor vault was a missed opportunity for the team. Kentucky had a solid rotation led by Worley and Nixon and is a half tenth behind the Gators.

Bunn (UK): They completely missed it on the broadcast. Typically vaults a FTY. 9.8

Richards (UF): Maloney, leg separation,Bail, loses her toe-point a bit. Gorgeous final handstand. DLO, has to take a step on the landing. 9.775

Magnelli (UK): Front Pike Half, Some form issues in the air and a hop back on the landing. 9.825 Career High

Worley (UK): y1.5, She gets good distance, but lacks on the amplitude. Slightly under rotates it and has to take a large hop sideways. 9.85

Skaggs: (UF): Huge Tkatchev to Pak Salto, much improved form this year, stunning handstand, DLO dismount, steps out of it to another college salute. 9.925

Nixon (UK): FTY, gorgeous full takes a small hop back on the landings.

Baumann (UF): The long-awaited debut! First competitive bars performance since June of 2016. Gorgeous first handstand, blind half to straddle jaeger, bail handstand, stunning final handstand, DLO, Stuck.. okay on second look she took a step. Her toe point and form is gorgeous and there’s tears in her eyes. So, now there’s tears in mine. I’m going to need that routine to be in this rotation next week. 9.925

Kentucky had four 10.0 start values on vault, but struggled on getting the rotation on the Y1.5’s fully around. Patterson vaulted her best front pike half of her career. Florida’s bar lineup had a solid performance, but had zero stuck landings. The highlight of the meet could most certainly be Alyssa Baumann on bars with a 9.925 in her career-debut.

Hagis (UK): Rudi to back loso, some legs separation on her rudi.  Straddle Jumps, Double Pike, nicely done. Her floor routine is a joy. 9.875. Confused as to how this scored a tenth higher than Bunn, but thats another conversation.

Clarke (UK): Front full, takes a step to the side, nice position on her straddle jumps, Front lay to front full, good, Rudi, messy legs in the air but gets a controlled landing. 9.85

Clapper (UF): Bhs loso loso, solid.. front aeriel full. stuck. I got completely distracted during that routine.. my bad.. That is what happens when your feed is behind, but she scored her first ever perfect 10.

Florida scored the highest score in the nation on beam with a 49.675.

Kentucky is No. 7 in the country on floor and they had a solid showing in Gainesville. Worley has one of the best tucked full-in’s in the nation and does it with ease. Florida had a stellar beam rotation led by Clapper’s 10.0 and Baumann’s 9.95. The Gators scored the highest beam event total in the nation with a 49.675.

Richards (UF): DLO, much improved form in the air, RO 1.5 to front lay, solid, straddle half popa, lacks flexibility and rotation,  double tuck, opens it up and gets a nice landing. 9.875

Baumann (UF): Double tuck, Stuck. RO 1.5 to front full, dances out of the landing, switch half to straddle full, gorgeous flexibility, double pike, great landing. That routine should give her the all-around title tonight in her all around debut. 9.95

Taylor (UF): Double tuck, good. 1.5 to front lay to stag, nicely done, double pike, large step back. She doesn’t have the dynamics, difficulty or height that her other teammates have on the event but this was by far her best appearance on the event this season. 9.8

It was great to see her have the opportunity to compete on three events tonight.

The No.1 team in the country displayed its depth tonight highlighted by a season-best score on beam in the NCAA. Alyssa Baumann had a career-night with her all-around debut. The senior went 9.900+ on three events to take home the all-around, bars and floor title. Kentucky was able to come back after a rocky lead-off on beam to earn a solid road score to apply to its NQS. This meet had seven athletes compete in the all-around. 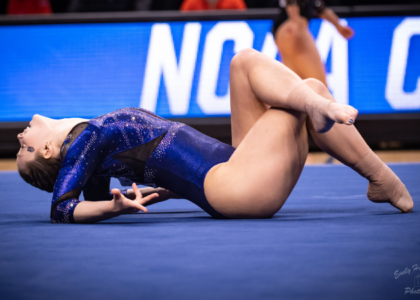 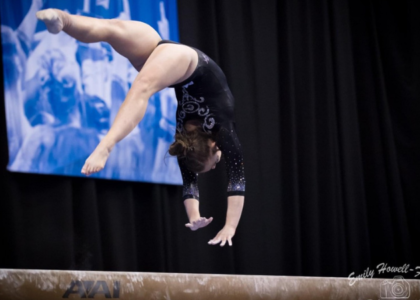