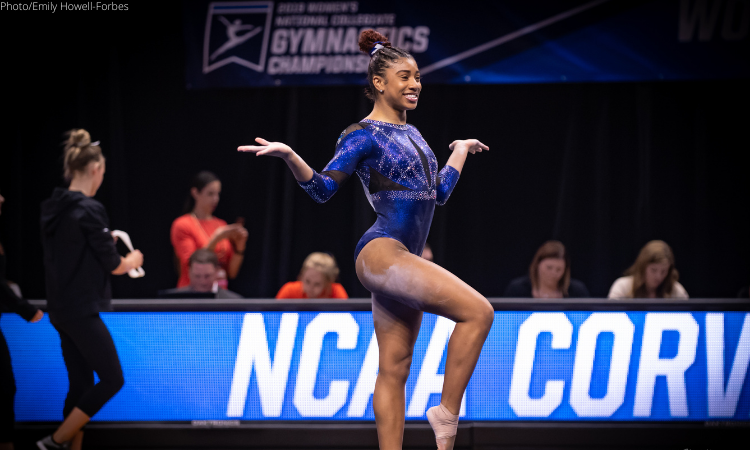 Drama meet of the decade, amiright?! Not only do we have a rivalry situation, but we’ve also got a No. 1 vs. No. 2 contest and battle of undefeateds. Juicy.

Remember that Florida broke LSU’s unbeaten home streak in the PMAC in 2019—and also won this dual in 2020 in Gainesville—but LSU took the 2019 SEC title over the Gators and owns more wins over the past five years.

Florida has a bit of an edge, partially due to health. We can expect Kiya Johnson to do as many events as her Achilles will allow, but if she sits anywhere, it opens LSU to needing to put up a routine that may go a little 9.7-y on a normal day. Florida has a few of those routines as well, especially on floor. It’s those folks on both teams you should watch closely because they may very well make the difference.

Let’s get one thing out of the way: Scores will be bonkers. Carol hitting the bottle bonkers. Tens with steps bonkers. You know it. I know it. Let’s accept it as best we can and move on. I’ll point out if anything egregious happens of course, or if scoring is leaning one direction, but I’m not going to use the word overscored 10,000 times.

As of writing this intro on Wednesday afternoon, there is already belly aching floating around about how Florida is doomed because it’s the PMAC, and it will never be fair. Come on now. This is the SEC. Everyone gets a home bump. That’s why we have home-and-home duals alternating years. I get it—the cards seem stacked sometimes—but I’m also bored of this discourse year after year after year if I’m being frank! Nya Reed in the header image captures my mood on the subject perfectly.

ANYWAY. That’s my little mini-op ed of the day. To the all around! Kiya Johnson—if she’s on all four—Haleigh Bryant and Trinity Thomas will be in a serious battle here. Bryant has the edge if we’re looking at average, but Thomas has the highest total in the nation so far. Johnson is the dark horse, with only two complete outings under her belt, but we learned in 2020 that she is not to be underestimated. Not to mention that she owns the only 10 on either team so far this year. What a treat for us to watch these three duke it out!

Popping in about 30 minutes before meet time to say that Sydney Johnson-Scarpf is having a hip flexor issue and is going to be out!

We’ve got Johnson everywhere except floor, which makes sense given her Achilles soreness. No need to tear it tonight! Sarah Edwards is making her return to vault and floor! That’ll be a score boost and pad the loss of Johnson’s floor number.

Shot of the meet ref studying a page in the Code before we roll here. That’s a mood.

Gnat is wearing what looks to be a wild print on her shirt. Carrying on the D-D tradition. We love it. Hang on, Gnat in sequin pants, idk who is in the shirt!

Richards (UF): Maloney, some legs to bail hand, again leg sep. DLO, took it way out but held the landing. 9.85

Shchennikova (LSU): Can she nail this thing two weeks in a row?? Y1.5, some knee softness, off balance on the landing but didn’t move her feet. 9.925

Schoenherr (UF): Toe half to Jaeger very high, Toe hand to bail hand a touch short of handstand. Quite late blind to double front half out stuck. 9.925

Johnson (LSU): Will she do the DTY after crunching it last week? YEP! DTY, some leg cross, small hop. 9.95, look, I’m not mad about it given the scores we’ve seen so far.

Look, we knew. The scores are generous, but they’re not cartoonish. We’re not seeing 10s with steps (yet). There are some body position things being let go on vault and some little things on bars, but we knew it’d be this way. We’ll see how it shakes out when we trade judges here. Either way, what a great start for both teams. This has been clean and fun so far.

The problem for UF is going to be those close catches. Can’t really be 9.775sy here today.

Johnson (LSU): Maloney to bail hand was nice, little arch on her first handstand. Toe hand to DLO stuck. 9.925, the problem is judges start high and have nowhere to go. We’ll see.

Brock (LSU): Giant half to a Tkatchev, little sloppy in toes, bail hand shy. FTDB, step back. She has some little foot form issues throughout. 9.825

Dunne (LSU): Tkatchev to pak with big leg sep and pretty low. DLO, slung it way out and some knees, step forward. 9.85, that one I have some questions on.

Bryant (LSU): Blind to Jaeger, good catching position. Bail hand soft in the back. Short last handstand. Blind to double front step forward. 9.875, it was more than .025 better than Dunne.

Durante (LSU): Hecht mount. Great handstand. Blind to Jaeger was big, little off kilter in the air. Pak to pirouette. FTDB low chest and a hop. 9.95

Well hi there. So let’s talk about sore separation, because that’s the issue here. I could make justifications for every score we’ve seen, save maybe that Dunne number. The problem is that when all the scores are bunched up like this, judges can’t really award superior sets, and then everything gets muddled and chaotic at 9.875-plus. I will say I found one score low. I think the deduction was for amplitude, but compared to the other FTYs, Skaggs was lowballed to me.

Also, look. We know that Shchennikova doesn’t get deductions on those form things. I don’t get it, but judges have clearly decided to let her hip angles and feet go. All we can do is shrug, yanno?

Desiderio (LSU): Switch to switch half to beat, the half was short on split and had some soft knees. Bhs loso, solid. Front aerial not movement. Cat to gainer 1/1 off the side stuck. 9.9

Skaggs (UF): Long wait for her music to start. She’s going to step off the floor. She walked back on, and we had a long wait again. Something seems to be up with the sound system? She’s laughing and UF is cheering loudly. Now she’s all the way off the floor. We’ll wait! OKAY here we goooo. Nope. The wrong music started. Okay okay now we’re on. Wolf turn little off balance. FHS rudi to split jump, adjusted her feet on the landing. Side aerial in her choreo was nice. Tour jete half to split 1/1, great splits and rotation. RO 3/2 to front lay, landed well but could’ve been higher in the lay. 9.85

Durante (LSU): All that waiting meant she had to wait too! We’ll see if it rattled her. Bhs loso, no movement on the landing. Front aerial to split, soft knees in both. Switch to straddle 1/4, again her knees, especially the switch. Aerial to 1/1 stuck. 9.925, okay now that one I don’t get, those knees!

Richards (UF): DLO, BIG, slides her front foot on her landing. RO 3/2 front lay directly into dance, better amplitude on that than Skaggs had. Double tuck, bounced her feet in her lunge. 9.875

Dean (LSU): Side aerial bhs, knees in the bhs. Switch to split, foot form got lost in there. Front aerial to beat, little pause between. Side aerial 1/1 stuck. 9.925

Johnson (LSU): Bhs loso, check on the landing. Switch to switch half, dropped her shoulder and was shy on the split on the half. Front toss, solid. RO 2/1 stuck. 9.925, mmm that’s high to me even in this score universe we’re in. Two small checks and a shy split.

Campbell (LSU): Bhs loso, big check with a step back. Front aerial with feet and a soft knee to good sisonne. Back leg form in her switch half. RO 2/1 short, hops forward. 9.825

Baumann (UF): She’s baaaaack. Double pike, no deduction on that landing. She holds her toe point through everything so consistently. RO 3/2 front 1/1, good, dances right out. Tour jete popa, little off balance, but she landed well. Double pike, slid a bit in the lunge. 9.9

Well. Okay now I’m a little squirmy, because now we’re looking at some breaks just not being taken. We shall see if Florida gets the same treatment on beam, but listen I’m not going to fuel the IT’S RIGGED army. Florida scores have been relaxed, too. I had that as a 10 in this meet with these scores, but it wouldn’t be a 10 in a four-judge panel situation.

At this point, let’s just root for 50s for both teams, yeah?

Dean (LSU): She’s in for Campbell who is apparently slightly injured after beam. Double pike soft knees and a slide in the lunge. RO 3/2 front lay, again soft knees and landed on her heels. Underrotated her second leap. High double tuck slightly cowboyed, holds the stick with a tiny foot adjustment. 9.875, okay that one I’ll say is high.

Shchennikova (LSU): FHS front 2/1, high but way overpowered on that landing, flies into the lunge. RO 3/2 front 1/1 lands on her heels. Switch ring switch half was fine. FHS rudi to split, best landing. 9.925

Baumann (UF): She’s so quick on her feet on the beam. Bhs loso, good. Switch to split. Front aerial solid, maybe lost some toe form in there. Small check on full turn. Switch half, short on rotation. RO 3/2 holds the stick. 9.925

Thomas (UF): Switch to split off balance on both but covered it well. Bhs one arm loso, good. Side aerial beat bhs swingdown, no issues there, great rhythm. Side aerial 1/1 true stick. 9.95

Clapper (UF): If she’s clean UF gets out of this without counting a fall. Bhs loso loso check, she had a little issue between the losos but kept it all together. Switch to split. Side aerial 1/1 stuck. 9.9

Bryant (LSU): Double front huge as always, maybe a bit of lack of control on that landing. FHS front lay rudi. She needs just a 9.875 to win it. Jumps traveled a bit but good positions. FHS 2/1 just no amplitude and sits it. Wow. Well, there you have it, Florida will take it. 9.425

Wow. I’m a little stunned. That was an extremely unexpected ending! Bryant looked so upset with herself. I think the cleaner team won, in all honesty, but LSU looked very good in most routines. Are these sores too high for both teams? I mean, yeah. But it was bound to happen. These are our first 198s of the year. 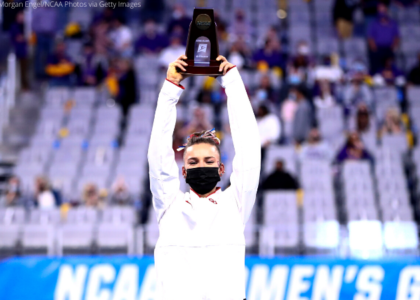