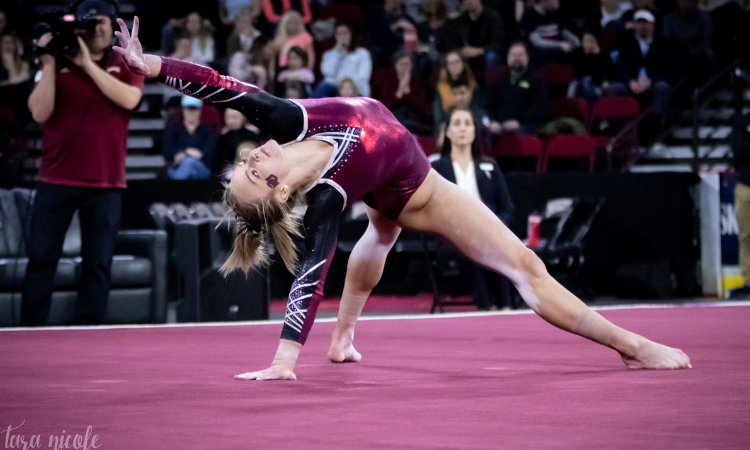 Well, this could be an interesting one. Even besides the fact this is in the literal middle of the day on a Thursday.

Denver competed without seven of its athletes available on Sunday. According to the meet preview, the Pioneers expect to travel to Morgantown without five of those seven gymnasts. Exactly which of those five remains to be seen. However, there’s a good chance it is the five gymnasts not present at all at Sunday’s meet: Jessica Hutchinson, Rylie Mundell, Rosie Casali, Isabel Mabanta and Amoree Lockhart.

Despite the personnel issues, Denver managed to score a 196.725 on Sunday while putting up just five routines on every event except floor. The team showed perseverance, hitting 21 for 21 routines competed. Lynnzee Brown was the star of the show once again; her 39.700 in the all around is just 0.075 off the school record set by her and Maddie Karr. Putting up even a fraction of the performance should realistically give Denver an edge in this meet, but the lack of available gymnasts could surely make things interesting.

West Virginia is coming off a season-best 195.175. The Mountaineers have yet to hit a fully complete meet, though last week’s performance is a step in the right direction. Bars is of particular interest; the Mountaineers have only had one of three bar rotations that didn’t have to count a fall, though beam has been shaky too. With that, McKenna Linnen’s beam has been a highlight, along with her floor. According to head coach Jason Butts, we can expect some lineup shakeups today, but he didn’t specify what could be changing. That’s certainly something to look for. We also know that West Virginia has had just one practice between last week’s meet and today’s meet due to the condensed schedule—we’ll see if that pays off.

The meet is being streamed on ESPN+ and live stats can be found here.

Denver’s lineups today. 6 up, no Mundell.

oops, totally missed the first two routines grabbing the lineup tweets. Ruiz ended bars with a nice DLO. 9.825 for her. 9.55 for Kianna Yancey, who went first on vault for WVU.

Waldron (WVU): yfull, some pike and a hop.

A solid bars rotation for Denver to open the meet. It was refreshing to see more regulars back in the lineup and to see the Pioneers put 6 up again. It wasn’t their best bars rotation, but it wasn’t bad by any means either–it was quite solid. West Virginia had a fine vault rotation. The landings weren’t quite there and they’re definitely not the most dynamic vault team, but they did hit. It will be interesting to see if Pierson upgrades to the 1.5 any time soon.

It’s WVU’s cancer meet. We got a nice tribute from the gymnasts to loved ones with cancer.

Vasquez (DU): clean yfull with a normal sized step back. Probably the best vault so far for Denver. 9.725

Judges taking a long time to get Holmes-Hackerd’s score. Assuming there’s also a tricky SV thing in there, as she usually connects the jaeger to the bail.

we just missed Lynnzee Brown’s vault…rude! they said it was a “big vault”. 9.85

LOVE seeing people in the crowd clapping instead of Lynnzee Brown's vault. Love it. It's my passion.

Ki. Yancey (WVU): Maloney to pak, some legs on pak, saved hs on low bar; ftdlo, step back. She fell on Sunday — good comeback routine for her. 9.725

It wasn’t Denver’s best vault rotation. The vaults were fine, but there’s a good amount of room for improvement. Hopefully Mundell and Sundstrom will be back soon to bolster this lineup. WVU didn’t have to count a fall on bars, which is good considering the past bars rotation this season. I was really impressed with their dismount landings, even if they were mostly double tucks. There was the one miss, but the Mountaineers will certainly want to build on this performance.

WVU head coach Jason Butts is “happy with their performance” so far.

Thompson (DU): great opening double pike; switch side popa solid, could be more extended but not bad; lay Rudi good; triple twist to close, step to the side. 9.775

Casali (DU): in for Vasquez; piked full in, stuck but then lifts leg and balances; switch half wolf full good; 2.5 to punch front stuck. Good. 9.825

Lynnzee Brown channeling her inner Aretha Franklin and demanding some RESPECT on floor! Another 9.950 for the senior!#PioneerTogether | #GoPios pic.twitter.com/k8DWYLaYIt

The scores don’t necessarily reflect it, but this beam lineup has the potential to be GOOD for West Virginia. Some tiny tweaks and mistakes to fix, but the potential is certainly there. Denver increased its lead on floor with six clean hits. Some room for landing improvement at times, but this is certainly a good place to be at the beginning of February. And Brown was obviously the highlight. One more to go!

Denver head coach Melissa Kutcher-Rinehart is impressed with grit and resiliency of the team. Says they just got the athletes back out of quarantine.

Can we talk about how Abbie Thompson does either a bad leg aerial or layout step out on beam?! Truly impressive!

Mabanta (DU): her official lineup debut; wolf turn good; bhs loso, small front foot slide; switch half split jump, small check but great split positions; side aerial lay full stuck. Not perfect, but a solid hit for her first official performance. 9.825 seems slightly high for this particular set in comparison to others. She’s going to be a STAR though.

A solid outing for Denver and one the Pioneers will certainly want to build on. There’s room for improvement to hit that 197 range again, but they’re on the right track. West Virginia should be happy with its performance also. 195.325 marks a season high. Again, there’s definitely room for improvement, especially on vault, bars, and beam, but it’s easy to tell that they’re improving. 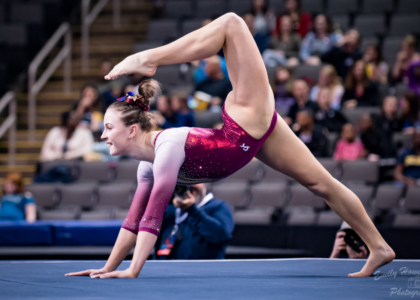