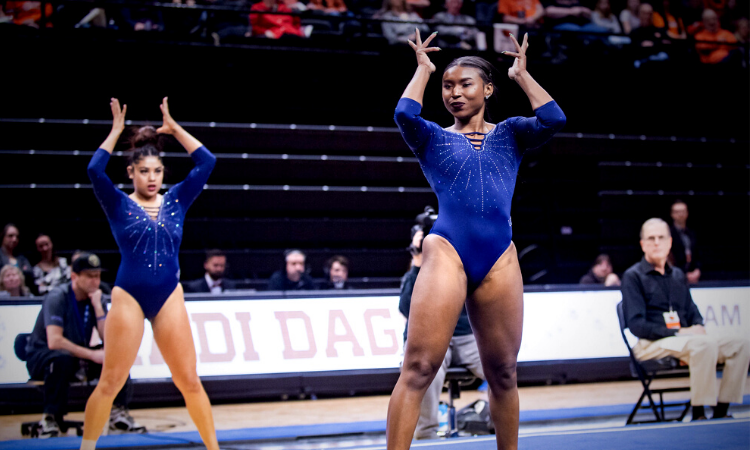 Unless you’ve been watching The Weather Channel 24/7 this week, you’ve probably been one of the 12-plus million viewers who have watched Nia Dennis’ viral floor routine. And if you’re one of the many who have watched the video more than once, you probably noticed the petite woman in a blue crop top and black flared pants dancing just as enthusiastically on the sidelines.

That’s BJ Das, and she’s the brains behind the viral moves.

Das, who’s in her second year as UCLA’s volunteer assistant coach, is well aware of the team’s history when it comes to viral floor routines. The choreographer likens the process of inventing routines to a singer that’s had a successful breakout album and wants to follow that success up with more. For Das, there doesn’t appear to be a sophomore slump.

“In her first year and a half at UCLA, [she] has three routines go viral,” head coach Chris Waller said. “It’s unprecedented. For her to pull it together—she is a genius that way—and she tirelessly works to bring that to a performance.”

Despite striking gold three times already, Das never sets out to make a viral routine. Thinking about social media sharing isn’t part of Das’s choreography process. What is essential, though, is finding the performer’s genuineness and seeing the gymnast as a whole. Authenticity takes priority over whether a performance may be popular with the masses.

“I’m not, like, an influencer. I am a couple of generations older than that. I grew up watching DVDs of Janet Jackson tours,” Das laughed. “I grew up with music videos back when they were on MTV, so catering things for the internet is a little foreign to me.”

What she does know is the importance of the choreography process. For Das, music selection is key, which she often finds and cuts herself. She’s confident enough to take a long time getting it just right.

After the music is perfected, she moves onto the choreography, often starting by freestyling and thinking about what moves, theme or character fits best with the sound, as well as the athlete performing it.

“I cater movements to what they would do naturally,” she said. “The most important thing for me is that it feels authentic to the athlete.”

She looks at each individual intuitively. They’re not only student-athletes, they are multi-faceted individuals with their interests and aspirations. Junior Margzetta Frazier, who hopes to become a performer after her time at UCLA, appreciates the approach. 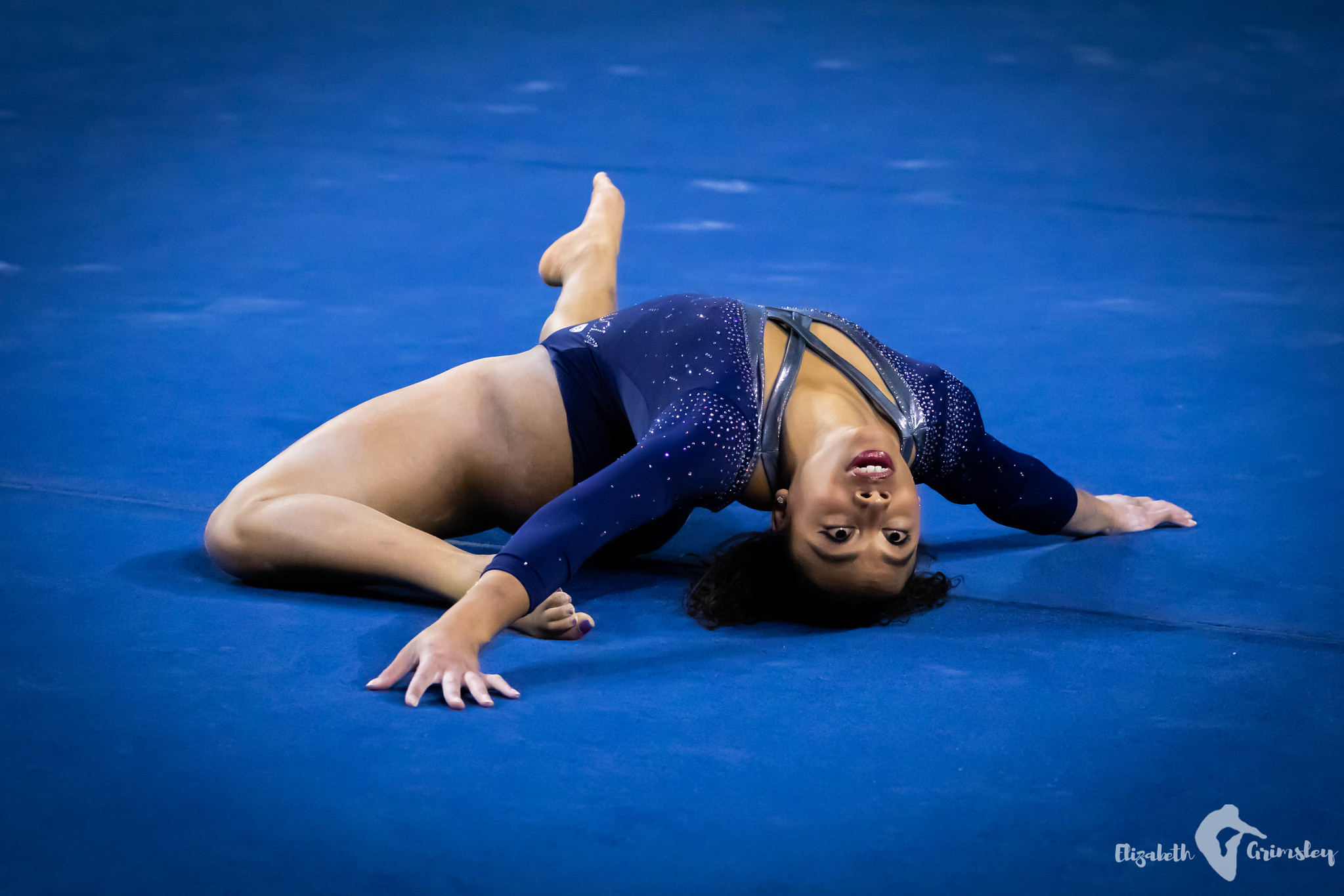 “Working with BJ, I do not feel like a gymnast doing choreography; I do feel like a dancer,” Frazier said. “She sees us as dimensional beings and not just as gymnasts. Especially when she does choreography—she looks at us as individuals and most importantly as dancers.”

It’s important to Das that the love of performing comes out through their dancing. She admits that COVID-19, as well as working on a limited time schedule and often over Zoom, makes it even more important for her that the student-athletes enjoy the process.

“I didn’t want them to worry about little details of perfection,” Das said. “I wanted them to have a good time, to share their love for the sport and their love for performing.”

Das’ choreography always starts with the athlete in mind, but coming up with something the audience will not only enjoy but be invested in at meets is the second-most important factor.

“It is so fun for our team to perform for the student section, and they always know the choreography,” she said. “I think of The Den, and I think of the fans in the arena. Are they going to be able to clap to this? Or have fun watching them?”

While Das may not set out to create a viral routine, there’s certainly something about the anatomy of the ones she creates that are more susceptible to catching fire.

“Our team naturally gravitates towards pop culture and certain styles of music and movement,” Das said. “So if a dance move or genre feels authentic to who they are, I encourage it and help them express themselves that way.” 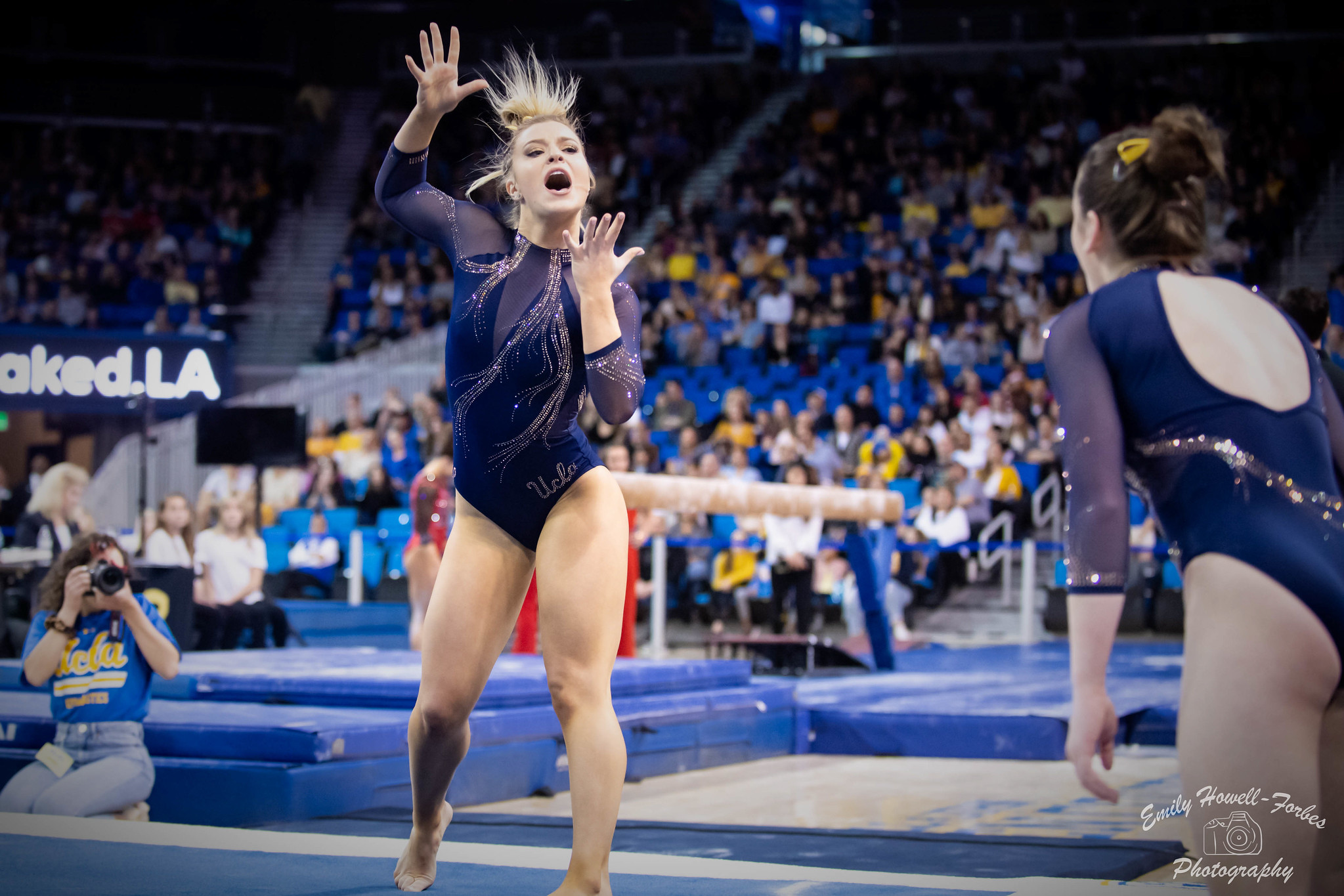 Das believes that if those layers gel, the online community will naturally feel the authenticity and gravitate toward the performance. Still, if a routine does go viral like Dennis’ did, she’s thrilled because it brings more visibility to the sport as a whole.

And if there’s another floor routine she senses will go viral in 2021, she’s not giving anything away. She wants everyone to be able to pick their favorite without biased opinions getting in the way.

However, Das does say she takes great pride in the variety of her routines—from Dennis’ hip-hop, to Frazier’s soul train, to freshman Frida Esparza’s Mexican-themed performance.

“There is no certain style with BJ; she does everything, which is really nice,” Esparza said. “She brings whatever she thinks fits more with each routine. We’ve tried different styles of dance with her, and it’s definitely helped me get more comfortable with my routines.”

Not only is there diversity in the team’s music but also differences in their personalities. An extroverted performer like Frazier or Dennis might revel at being in the limelight while there are challenges working with a more reserved student-athlete.

“If there is an athlete that is a little more introverted, I have to work hard to make sure that they feel confident and comfortable in what they’re doing,” Das said. “I honestly chase them around the floor during practice.”

She talks them up, telling them to use their faces and to smile and look at her. She follows them around until they’re “sick of hearing me,” and it eventually just clicks.

“They take a lot of pride in being a Bruin and being known as a team that performs and they can dance.” Longtime head coach Valorie Kondos Field set up that culture for her, and Das has continued it.

“Most of them come to UCLA being willing to learn and grow and to get uncomfortable,” Das said. “I think that’s why they always leave as more confident humans.”

READ THIS NEXT: For Mary Korlin-Downs, Obstacles Are a Part of the Grand Design 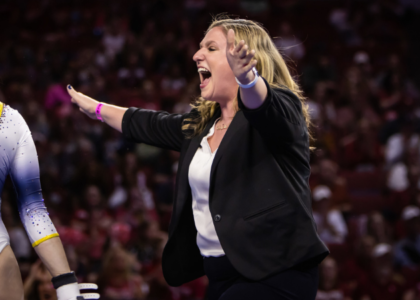