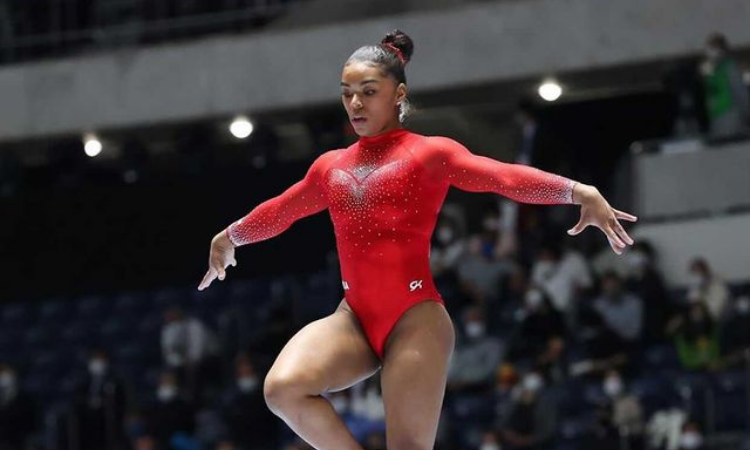 When eMjae Frazier competed in her first international elite assignment in November 2020 and committed to California for the 2023 season, it seemed almost miraculous. Exactly one year earlier, she tore three ligaments in her right knee, which required major reconstruction surgery. She was out of the gym for eight months, and her gymnastics career was at risk of being over.

However, Frazier refused to give up and her strong mindset put her on the path to recovery. “If I had told myself, ‘Oh man, this is an over one-year recovery,’ I would have never competed [again], and I wouldn’t be on the National Team now,” she said. “Nothing is over until it’s over. If you work hard, strive for your best and believe in yourself, you can achieve anything.”

Even though in the first half of 2020 the injury prevented her from doing much of anything except for bars and some basics, Frazier continued to attend the U.S. elite national training camps because she wanted to show everyone from her peers to the coaches that she wasn’t done.

Her determination paid off. In August, national team coordinator Tom Forster contacted her and asked her if she was interested in competing at the Friendship and Solidarity Meet in Tokyo, Japan, in November. Frazier was elated. “The fact that [he] gave me the opportunity to go for this meet [despite the recent injury] was amazing,” she said. “I showed [him] that I wanted to compete [and] that I could contribute [to the team].”

The assignment was a big moment for Frazier. It was her senior debut, her first ever international competition, her post-injury comeback, her first time traveling abroad and her first time dealing with jetlag.

She competed on vault and beam and showed some nerves, but she was happy with her overall performance. “Of course I wished for a little better performance,” Frazier said. “But just being able to get out there [was a great experience]. It was my first time, and I don’t want it to be the last. I’m already excited for the next meet to come up. I’m hungry for a meet now.”

Frazier hopes to compete internationally as much as possible in 2021. She has her eyes set on the Pan American Games and possibly the world championships. “I have high goals for this year,” she said. “I’ve really improved since championships in 2019, and I’m ready to come out and show them what I can do.”

Frazier is working on some important upgrades, including a Nabieva on bars and a front full through to a double tuck on floor, which will significantly increase her difficulty scores. “Last year I would have been far ahead [in my gymnastics] of where I was in 2019,” Frazier said. “Now I’m past where I was last year, so I’m excited to go out there and prove [to the committee] that I can be on any team. I’m ready.”

As a child Frazier started doing gymnastics because of her sister Margzetta, now a junior at UCLA. “Without my sister, I would be doing soccer and track instead of gymnastics,” she said.

It was also Margzetta who inspired her to become an elite athlete. When eMjae was 10 years old, Margzetta, four years her senior, competed in the Hopes division, prompting her younger sister to strive for more. “J.O. is really great, but I wanted to become an elite and get what I could out of gymnastics, strive for the greatest,” Frazier said.

Margzetta remains involved in her younger sister’s gymnastics career: She recently helped eMjae with her floor music for the upcoming 2021 season. “My music is great,” Frazier said. “It makes it even better that she was able to help with it. I’m hoping that everyone will like it because I love it.”

When Frazier started thinking about colleges, Margzetta was once again the right person to ask for advice. “Margzetta made sure that I made the best decision for me,” Frazier said. “She said, ‘It’s up to you. You decide where you want to go, just [visit] the campus to make sure that you feel right at home.’ And that’s what I did.”

Given that she and Margzetta are close and have had similar gymnastics trajectories, it was logical to assume that eMjae would follow her older sister at UCLA. However, she wanted to build her own independent future. “UCLA is a great school,” she said. “We’re both in California, we’re both Bears, but I’m really hoping to go my own way.”

In her collegiate choice, Frazier looked for a university with both good gymnastics and good academics because “gymnastics doesn’t last forever.”

Because of the pandemic, she was able to visit only one other college, but once she saw Berkeley, she felt at home. Her future coaches, Justin Howell and Liz Crandall-Howell, were very supportive, and Frazier felt that she got along well with her future teammates from the start, too. “I was able to go on a Zoom call with the incoming freshmen and with some of the sophomores that will be my future teammates,” she said. “They’re a great bunch of girls. It seemed that we all clicked.”

Thanks to her elite training, Frazier can compete a lot of difficult skills, and she hopes to bring some of that difficulty to Cal. Her double layout on floor is at the top of the list. At the same time, she still wants to continue learning new skills in college, including a side aerial to full twist dismount on beam—which she thinks looks fun to compete—and perhaps a new vault. However, she does not dismiss the idea of competing her Yurchenko double at Cal.

Most importantly, though, she wants to help the team reach success. “When you get to college, everyone is going for that one goal,” she said. “I hope I can put up good scores and help Cal succeed.”

Looking back at her long path to recovery and her achievements in 2020, Frazier acknowledges that resilience was key to her success. For that reason, her recovery from her knee injury is the thing she’s most proud of. 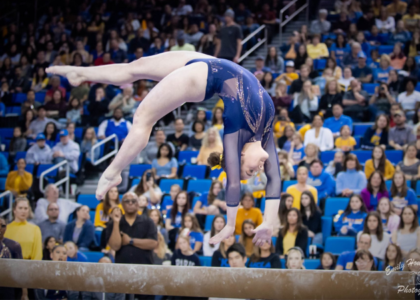 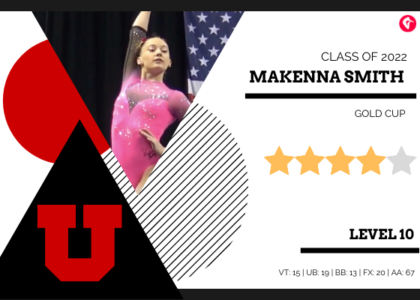 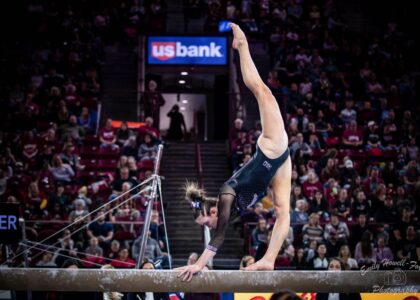