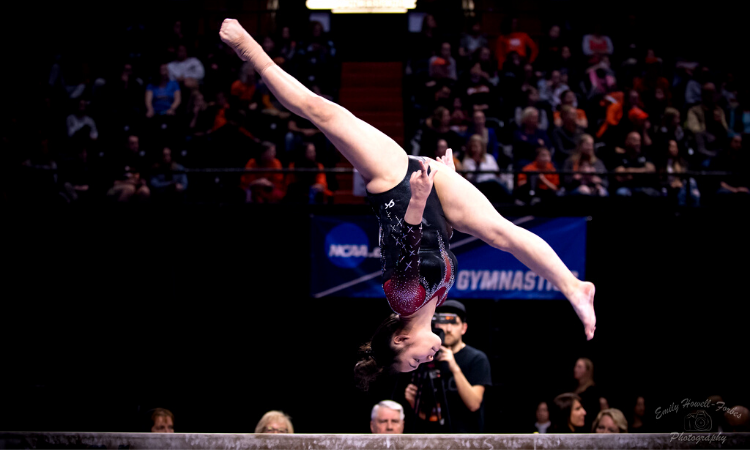 This year has been unlike any other we’ve experienced. Despite the fact that we’re asking how it’s already December, some of the months really dragged by. March seems like six years ago, not nine months, and we refuse to believe that Trinity Thomas’ first perfect 10 happened this year. So as we gear up for 2021, let’s take a little trip down memory lane and revisit the highs, lows and everything in between from 2020.

Jay Clark takes a tumble. OK, OK, we know this didn’t technically happen in 2020, but it’s too good not to bring back. The best moment from the events that lead us to the start of the 2020 season (see what we did there?) was the LSU co-head coach’s heroic stunt.

Thirty-one gymnasts score a perfect 10 during the 2020 season. While not as many as some years, we saw a lot of perfection last season, with Denver’s Alexis Vasquez scoring the first of the year and UCLA’s Kyla Ross the last.

Temple’s Ariana Castrence debuted a double-twisting Yurchenko. It’s not common for any gymnast to compete the difficult vault in the NCAA, let alone a gymnast on a mid-tier team. We love any opportunity to shine a spotlight on these underappreciated teams.

UCLA’s Grace Glenn scored the first ever lead-off perfect 10 on beam. It was almost inevitable, but fans still waited in anticipation to see if and when Glenn would notch the perfect mark on her signature event. It finally happened at home against Utah, and the celebration afterward was priceless.

LIU announced it would be adding DI gymnastics. One of the true bright spots in NCAA gymnastics in 2020 was the announcement of a new Division I program at Long Island University on March 5, right before the world as we knew it ended. And while back then we thought of the 2021 season as being forever away, it’s now almost here. We can’t believe it either.

*Gestures Wildly* COVID-19 disrupted the sports world. We don’t really have to recap this as we all remember clear as day the events that lead up to the 2020 season being canceled, but it wouldn’t be a rewind without a small section dedicated to it. While we’re still sad the seniors never got a proper goodbye, can you believe the 2021 season is almost upon us? We never thought this day would come.

Seattle Pacific is cut for unconvincing reasons unrelated to the coronavirus, the AD claims. Our first discontinued program of the year fell on Seattle Pacific’s shoulders. And while the athletic director claims the reason wasn’t financial, the situation is fishy at best. Nevertheless, the Falcons’ last competition season came in 2020, and the remaining team members were forced to find new homes over the summer or retire early.

Black Lives Matter protests reach NCAA gym. Discussions about racial inequality came to the forefront of the conversation across the U.S. Stories of racism came to light, and many teams made statements—some more successful than others. The work isn’t done, but the protests sparked, at the very least, long-overdue discussions, and shed light on systemic issues that need to be corrected.

Bryan Raschilla finally gets his pay day. After leaving Alabama, the longtime assistant coach joined rival Auburn as a volunteer for two seasons, helping the Tigers succeed on vault and floor. He finally found another well-deserved paying gig, this time at Oregon State, where he’ll coach his first season in 2021. Could he be in line for the head coaching job after Tanya Chaplin, who dealt with health issues in early 2020, eventually retires?

William & Mary men’s and women’s programs are cut, then reinstated. It was a wild ride for the Tribe that ultimately ended on a positive. After being cut following the 2021 season at the beginning of September, the student-athletes and supporters worked tirelessly to reverse the decision. The women’s team was added back first thanks to Title IX violations, then the men were reinstated after the athletic director was fired.

D-D Breaux retires after 40-plus years at the helm. We honestly never thought the day would come, and we certainly figured if it did it would be after the Tigers won a national championship. Alas, the great, legendary coach retired from the sport just before the start of the preseason. Here’s calling for Jay Clark to adopt her wardrobe as he takes over in 2021.

Bridgeport still hasn’t said what the hell is going on. The University of Bridgeport as a whole is in trouble and is likely going to be purchased by three nearby colleges. That’s not exactly good news for the gymnastics program, which has a long history of success at the Division II level. Plus, despite all the uncertainty, not only have fans and other concerned parties not heard about the future of the school or program, the team has been in limbo all year. We still don’t have an official word as of mid-December. To top it off, Head Coach Byron Knox departed for Southern Connecticut—and it seems he’s invited a number of his former gymnasts to come with him.

Temple joined the EAGL from the ECAC. Joining LIU as new conference members for 2021, the Owls made the move from the ECAC to the EAGL in late fall, giving the conference a nice round eight teams for its competition this season. With the Ivy League not competing in 2021, that leaves Southern Connecticut and William & Mary the only two active squads in the ECAC this season.

READ THIS NEXT: 2021 Predictions