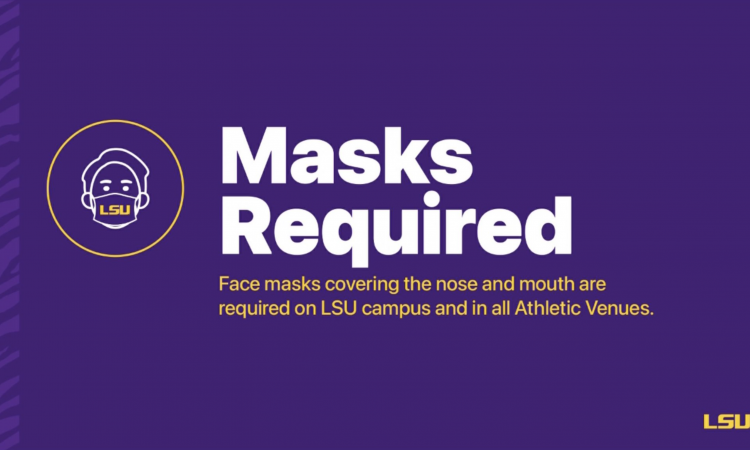 If you’ve taken the COVID-19 pandemic seriously, you know cognitive dissonance well. While you sit idly at home, biding your time safely until vaccine distribution comes to put the pieces back together, you’re forced to watch so many others who aren’t as careful and wonder if you’re living in the same world.

On a totally unrelated note… LSU’s Gym 101 happened, and the COVID-19 situation wasn’t great. That’s probably a charitable assessment, and the backlash—in gymternet fashion—was swift. The Tigers are no strangers to backlash this preseason thanks to a noted lack of masks and distancing in training videos.

Why are things like this allowed to happen with little consequence other than some pointed analysis on Twitter? It’s so obvious that if the poor COVID management of events like Gym 101 had occurred in a mainstream venue like the NFL, we’d have known about it. The Dallas Cowboys’ early quarantine party and the ill-fated meeting of the Denver Broncos quarterbacks were national laughingstocks that warranted punishments and even fines. On the other hand, Gym 101 (an actual sporting event, unlike those two incidents) got some local press and a few shady tweets. But the danger it put people in was no less grave.

The comparative anonymity of gymnastics has negative consequences that go far beyond it being held to goofy standards. It means that large-scale disasters like Gym 101 happen with little oversight. And so it falls on the shoulders of the fans to publicize what’s going on.

And if that’s the case, so be it. If no one else is going to acknowledge the danger these teams are putting their peers in by conducting practices and events in such an unsafe way, we have to be the ones to publicize the issue. It’s time to take a stand and call them out.

Some might say this behavior is petty and will be quickly tainted by people who just don’t like a certain team. I’m fairly certain this take gathered the momentum it did because LSU isn’t exactly a universal fan favorite, and of course there will always be people acting in bad faith. However, to allege that the Gym 101 hate was part of a massive anti-LSU vendetta says more about the accuser than the accusee (though if you’re just bringing it up to make a joke or meme, consider asking yourself what exactly that accomplishes).

We’re not thinking about past ugly leotards or questionable team dispositions when we acknowledge abysmal COVID-19 safety. We can’t afford to look back that far when what lies ahead is so critical for so many people.

That said, it has to go both ways. We have to keep the same energy for everyon—even our favorite teams. Amidst the Gym 101 Twitter firestorm, some LSU fans and, uh, apologists, were quick to point out that other teams had committed COVID-19 violations and weren’t called out for it. While Gym 101 was inarguably another level of bad, those individuals had a point. Various teams have been seen on camera practicing with either no masks or just a few here and there, and they haven’t received the coverage LSU has. If we claim to care about this pandemic and stopping it from impacting even more people, we have to be vigilant and hold them accountable.

It should go without saying that programs could be doing a lot more to instill public trust. Guidelines from conferences and the NCAA are sketchy. It doesn’t help that states have taken different levels of action and have different guidelines, so certain practices, flagrant as they may appear, are technically allowed.

So, programs, why leave it up to speculation? Let us hear and see your safety protocol and practices straight from you. We’re all too familiar with gymnastics’ fraught relationship with transparency, but if there was ever a time to start, it’s now.

It’s not all bad right now. But while I’m certainly impressed by those teams who’ve gone above and beyond with COVID-19 safety measures, I hesitate to offer too much praise. A look at any seemingly compliant team’s personal social accounts will show indoor gatherings and “no masks, just vibes.” And even if this wasn’t the case, having a group of people in an enclosed space can never be 100% safe in a world where COVID-19 exists. Maybe that leads to some hard questions, including whether the 2021 season should be happening at all. But as of now, it is happening. And as long as that’s the case, it’s up to those who care about the sport to hold these teams accountable, as long as it seems like they’re not facing accountability anywhere else.