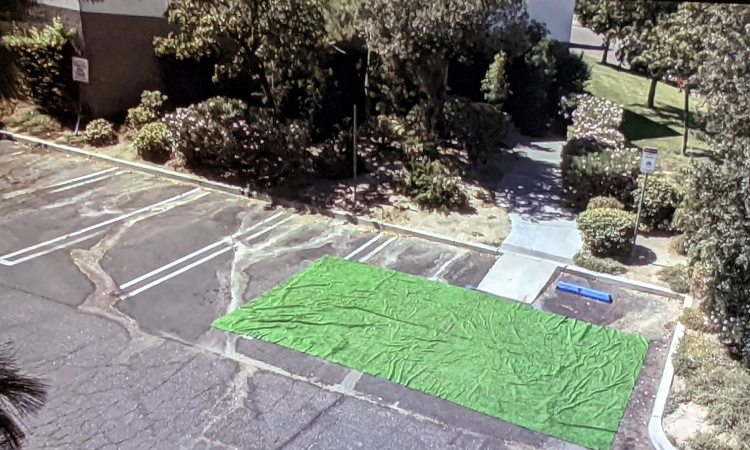 The girls are meeting at the Rock for a late night pre-Worlds practice, and the non-Kaylies are not amused. The MAG team is also there and doing some gravity-defying skills. Oh, and they’re all vampires.

The other girls get attacked by the vamp boys, so Kaylie runs out into the foggy night where she’s intercepted by vampire Austin and now-vampire Emily.

Sasha drives up and rescues her. He says, “I’d never leave you, Kaylie. I’m going to help you get strong and healthy…” Oh, but it turns out Kaylie’s also a vampire, and she attacks Sasha.

Kaylie’s at inpatient treatment for her anorexia and describing her dream at a group therapy session. The therapist is trying to find greater meaning beyond, “I watched Twilight before going to bed.”

She also calls Worlds “your big show,” which offends Kaylie to her very core.

At the Rock, Payson’s sulking because Sasha’s gone and Kim tells her to move on.

Emily’s not sure whether or not she’s still on the Worlds team after being arrested for accidentally missing her hearing. Chloe’s all, “I mean, it is kind of your fault… You stole medication and skipped your court date.” 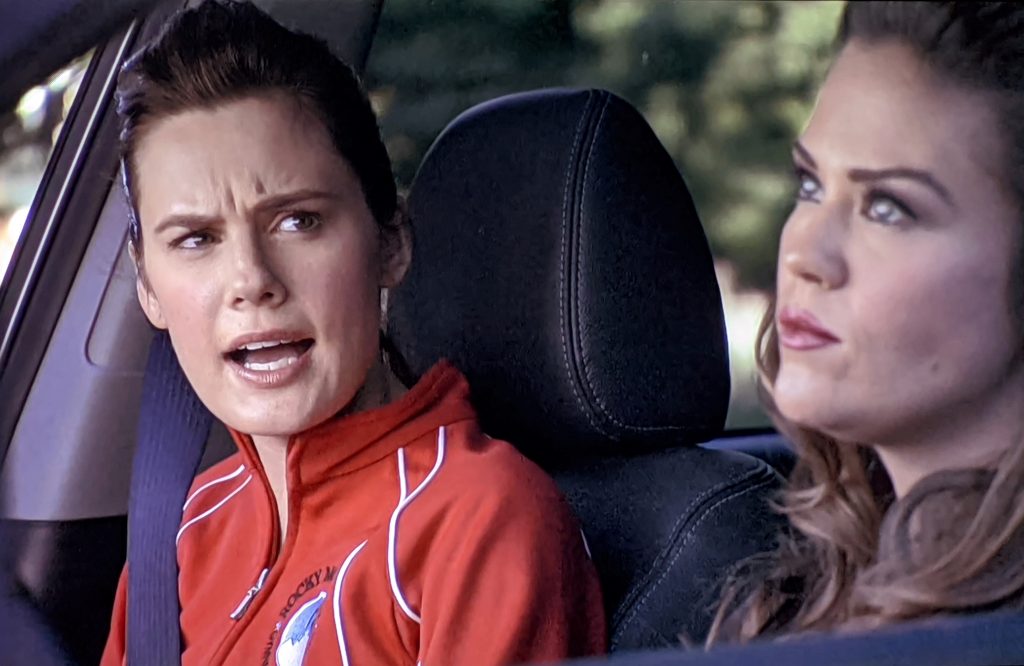 TWIST! Lauren is still furious with her daddy for keeping her mom out of her life, so she’s living with Summer. Summer is trying to convince her that forgiveness is the only thing that heals, and Lauren’s like, “Eh…”

I like how Sasha’s peaced out, but they’ve left his AstroTurf in the parking lot.

During practice, the girls are debating whether or not Sasha’s ever coming back. Payson says the NGO won’t let him off the hook until they see the entire video of their kiss, which would exonerate him. Gosh, if only they knew who sent that picture to Ellen Beals in the first place… 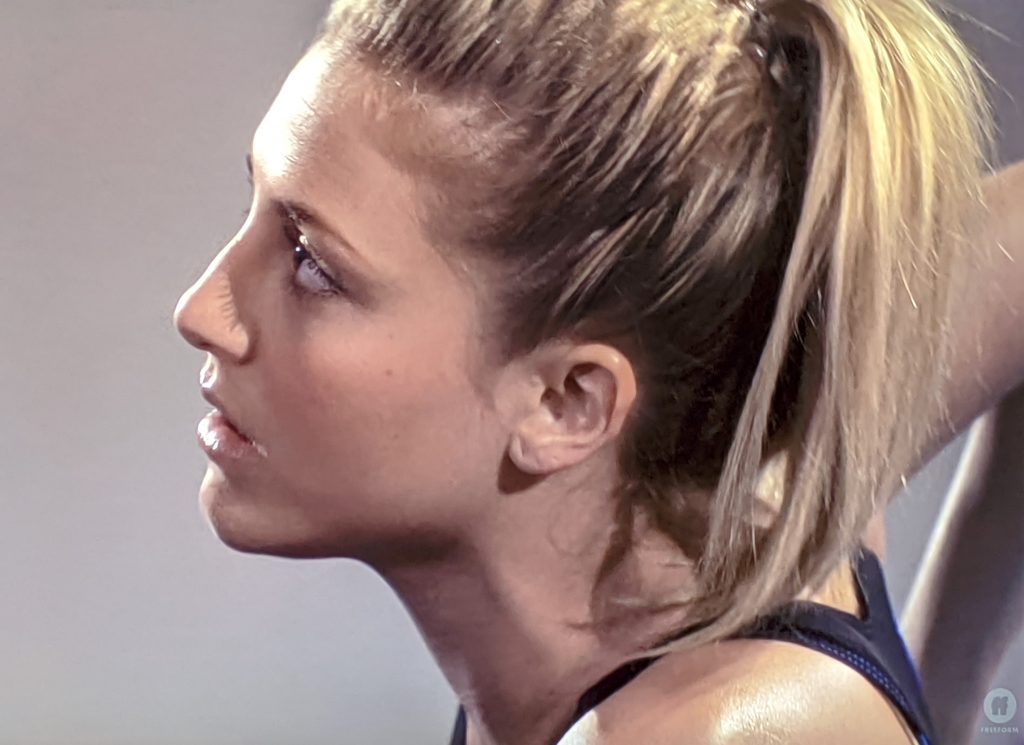 Steve Tanner is surprisingly nonchalant about his teenage daughter living with his ex-fiancée. He seems way more pressed about finding a new coach for the Rock. In his words, “This gym has a bit of a ‘stink’ on it at the moment.”

Kim and Summer confront Steve about whether or not he sent the Payson/Sasha pic to Ellen. He’s all, “Who, me? I would never!” He promises that if he ever finds out who did, that person will be booted from the Rock.

Kaylie’s having dinner with her fellow patients, and it’s… Weird. For one thing, they’re surrounded by cornucopias of food. Then there’s this:

Payson is coaching Emily and Austin’s spotting her. This is safe! The girls are preparing for an exhibition in Denver this weekend to promote bringing the 2018 Olympics to Denver, but Emily has to get approval from her probation officer to leave Boulder.

They’re having a meeting with Kim, Summer, Chloe and this NGO guy who makes Valentina look like Tom Forster.

The PO agrees that Emily can go, but she’ll have to wear an ankle monitor. She suggests that maybe Emily could wear pants during the exhibition? 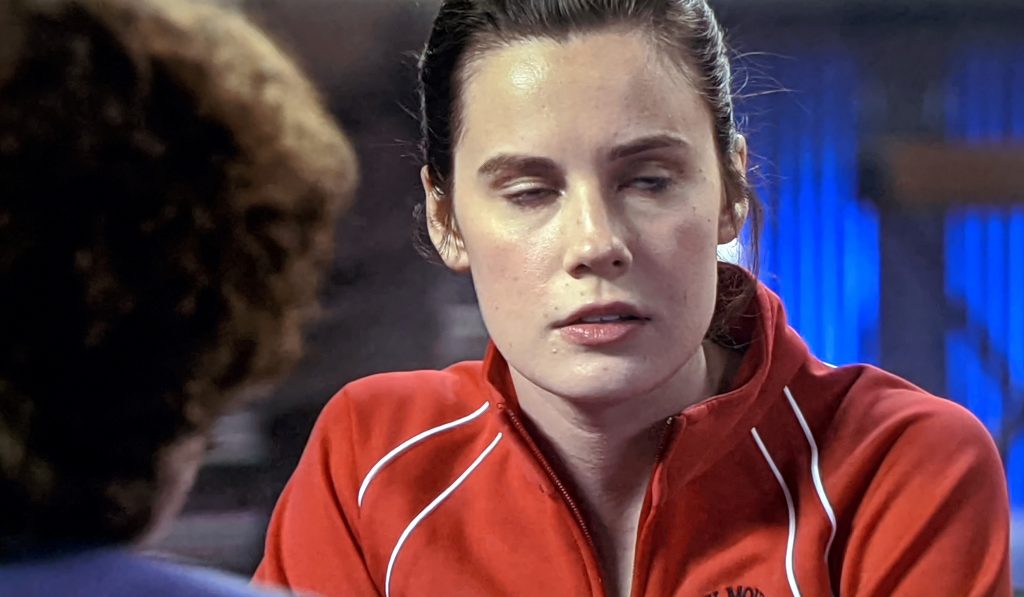 The girls get to their hotel in Denver and the concierge rattles off all of the fabulous things in store for them as honored gymnast guests: A VIP party, tour of the governor’s mansion… Oh wait, that’s for the Denver Elite squad.

Kelly Parker, who was apparently hiding in the bushes waiting for this moment, pops out and says the NGB wants to put their “best face forward, and your gym is kind of a cess pool.” Also, now that her ankle injury is healed, she’s going to steal one of their Worlds roster spots based on her performance at this outdoor exhibition on a Tumbl Trak.

Next, Austin arrives with his pretty photographer friend Max in tow. Max is seriously impressed by Payson’s face and the way it catches the light.

Emily, Payson and Lauren go to visit Kaylie. Emily wonders why none of them saw that Kaylie was in trouble. Lauren says, “As her best friend, I knew.” A) You aren’t. B) Weird how you aren’t saying anything until after the fact. She tries to convince the other girls that Kaylie sent the pic to Ellen Beals to get Sasha to leave her alone about her ED.

Shocker, Kaylie isn’t super serious about her recovery, she just wants to get well enough to leave and resume gymnastics training.

That night, Payson, Emily and Lauren are at the fancy party (albeit without VIP passes), and the press is all over Kelly Parker. Max is the only photographer taking pics of “the Rock Rebels.” Huh… Turns out Max is actually a gymnast, too, and he’s trying to decide whether to join Denver Elite or the Rock. Kelly Parker mentions that they have a fantastic new rings specialist:

Carter’s still salty about his recent breakup, saying, “Ask Lauren why I left. The Rock is going doooown.”

Lauren and Max get in an awkward little dance battle with Kelly and Carter. 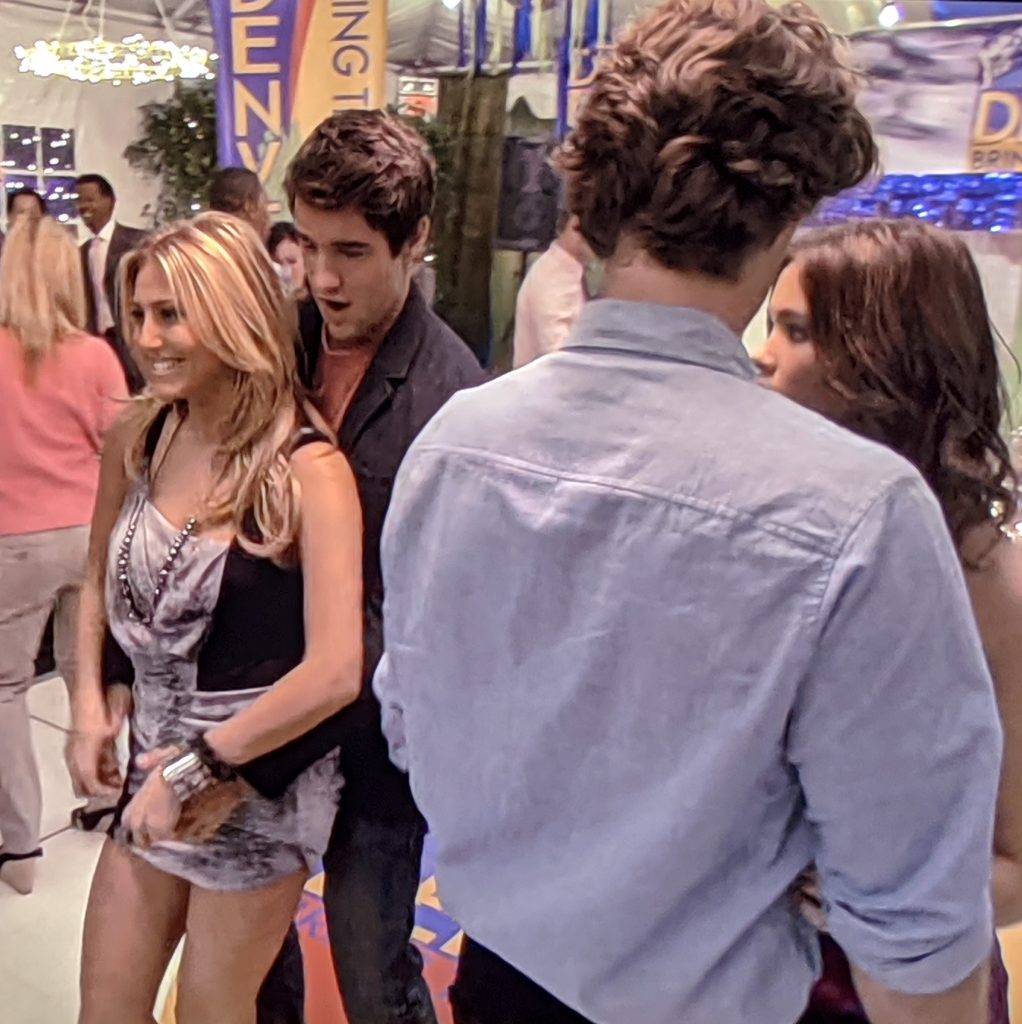 As Lauren’s grinding on him, Max asks, “So where’s your friend Payson?”

Emily and Austin are commiserating about being separated from their respective loves. Emily breaks down about how worried she is that everything in her life is falling apart; she’s angry at herself but angrier at Chloe. “I can’t help but think if she were better at, well, everything, we wouldn’t be living hand-to-mouth.”

Austin tells her to quit blaming her mother for her mistakes. He says something to the effect of, “If your brother was so sick, why didn’t you just call an ambulance and pay for it by selling one of your lake houses?”

It’s 9:00 p.m. and Chloe’s getting ready for work when Mr. McGowan, that horrible NGB guy, shows up to get “an unbiased look” at Emily’s home life.

I know I give Chloe a lot of shit, but McGowan is reeeally poor- and mom-shaming her, which is so gross. He also claims these athletes “are thoroughbreds” who need to be treated as such. Chloe tells him to GTFO of her stable home.

As he’s leaving, McGowan says, “I’m not here to judge you, Chloe.” REALLY?! “I’m here to save your daughter’s dream.” Again I say, REALLY?!

Back at the party, Kelly Parker is trying to rattle Payson as usual. 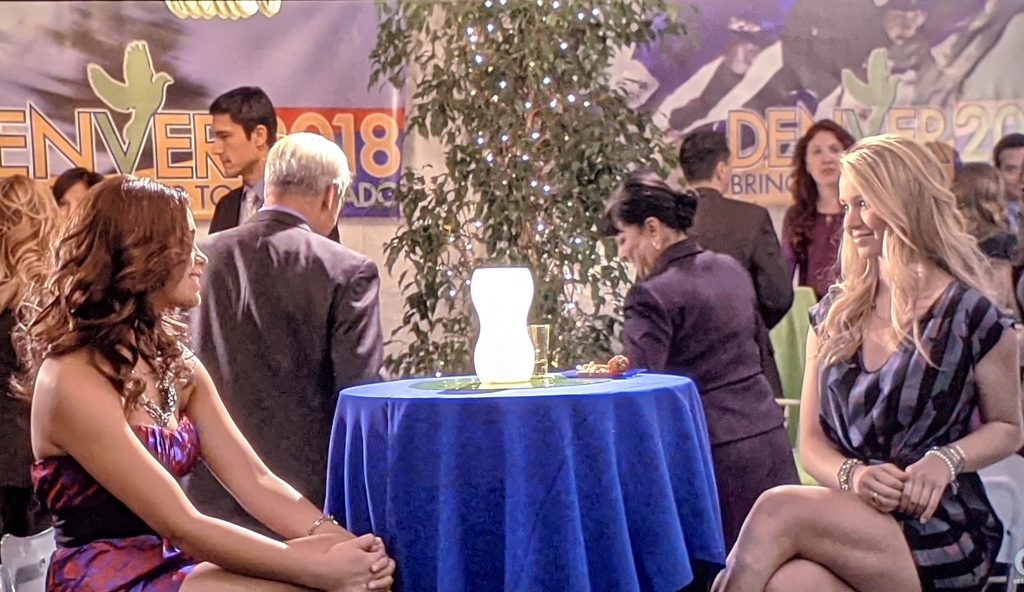 She claims to have all kinds of “delicious gossip” about Sasha, including the fact that he’s in Denver according to Marty.

Obviously, Payson wants to leave the party and go search for him immediately. Kim tries to talk her out of this and convince her to move on.

Payson sulks off and runs into Max who tells her she’s beautiful.

Looks like Kim the Iconic wasn’t serious about letting Sasha go and has tracked him down at a late-night fight club boxing gym. 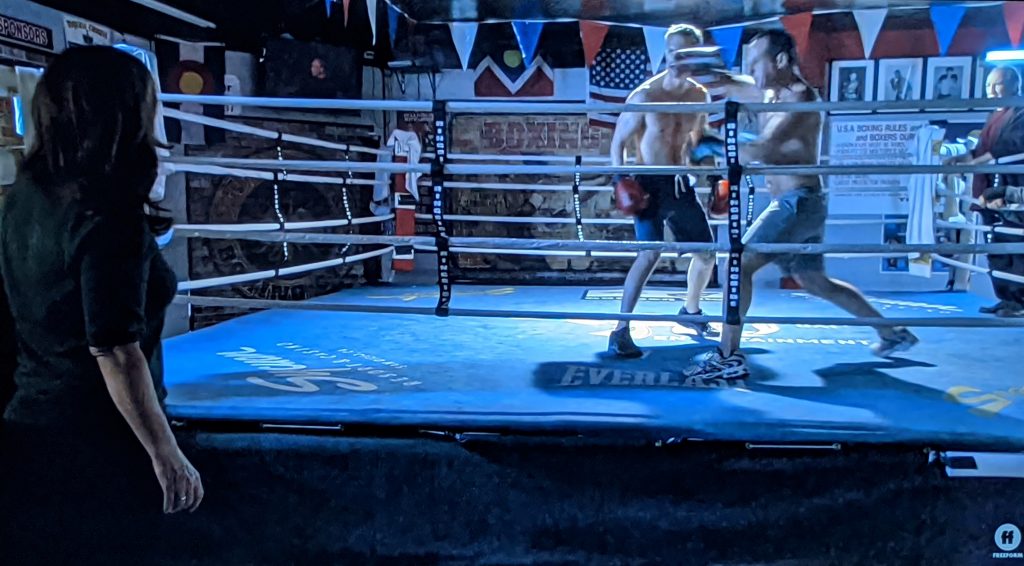 Sasha’s “heartbroken” and planning on letting his Visa lapse so he gets deported to Romania. Kim’s like, “That’s some bullshit, and here’s why.”

It’s exhibition day and the Rock girls are all going to wear leg warmers so Emily can hide her ankle monitor without drawing focus. The emcee introduces Denver Elite as “the pride of Colorado” and the Rock as “another club… They’ve had a few issues lately, but they made it here.”

Denver Elite does some straight up Jazzercize with a few tumbling passes and dive forward rolls thrown in for good measure.

The Rock’s routine is vastly superior… At least until mid-performance when Emily’s leg warmer slips revealing her ankle monitor. Everyone is shook, and she runs away in shame.

Max draws attention away from her by jumping up on stage and doing flairs on the vault. The team finishes their performance without Emily.

Suddenly, Emily’s back and commandeers the microphone. She publicly apologizes for hurting her team and the sport as a whole. “The Rock is a fantastic club and Sasha’s a fantastic coach, and I disgraced them. And my mother… She does her best.”

Austin gives her a hug and tells her he’s proud of her. Lauren says, “So, this ‘forgiveness’ thing… You just say you’re sorry and people get over it?”

Austin finally decides to visit Kaylie. She asks if he actually meant it when he said he was falling for her or whether he just wanted to get her into treatment. He says he meant it. She says, “What if I said I was falling for you, too?”

He says, “I’d say put it out of your head for a while. If you were taking this program seriously, you’d know you can’t date anyone at this stage of your recovery.”

Emily gets home and Chloe’s moved into the living room so Emily can have an actual bedroom. Geez, what a concept!

Lauren is trying to “far-geeve” (did I say that right?) her father, and is moving back home.

For once, an episode doesn’t end with Payson crying! She takes Sasha’s medal off her mirror and puts it in a drawer.

Kaylie’s roommate tries to talk to her and Kaylie bites her head off, ranting about how she doesn’t belong in treatment because “being small is part of my sport.” Her roommate says, “Oh, thank god! I’m a model and I don’t belong here either, but I had to make sure you were cool. This is my third trip to rehab; I’ll teach you everything you need to know to get out of here!”

Faker Than Holding a “Please Let Us Host the Winter Olympics!” Rally in the Middle of Summer

Realer Than a Teenage Girl in 2010 Dreaming About Vampires