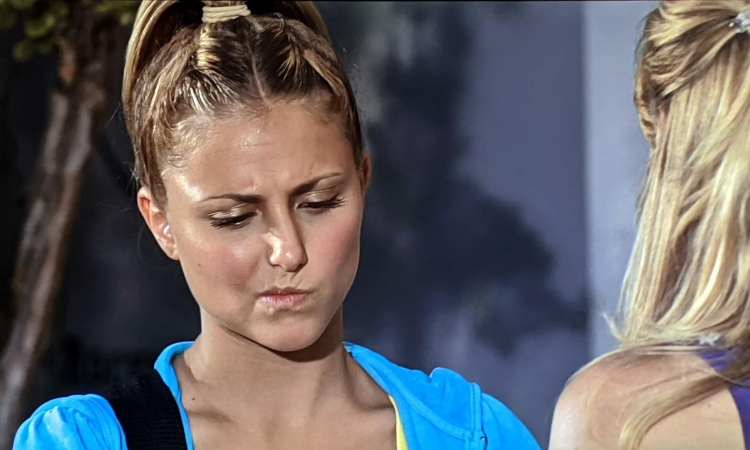 Aw, Lauren and her Daddy are fighting. She’s mad that Steve has been funding Emily’s fake scholarship and “helping himself” to her mother.

The doorbell rings and it’s Emily. She’s dropping off a thousand bucks in cash dollars so she’ll no longer be beholden to Steve Tanner. Steve insists she doesn’t have to pay him back; Lauren says, “Yes, she does.” 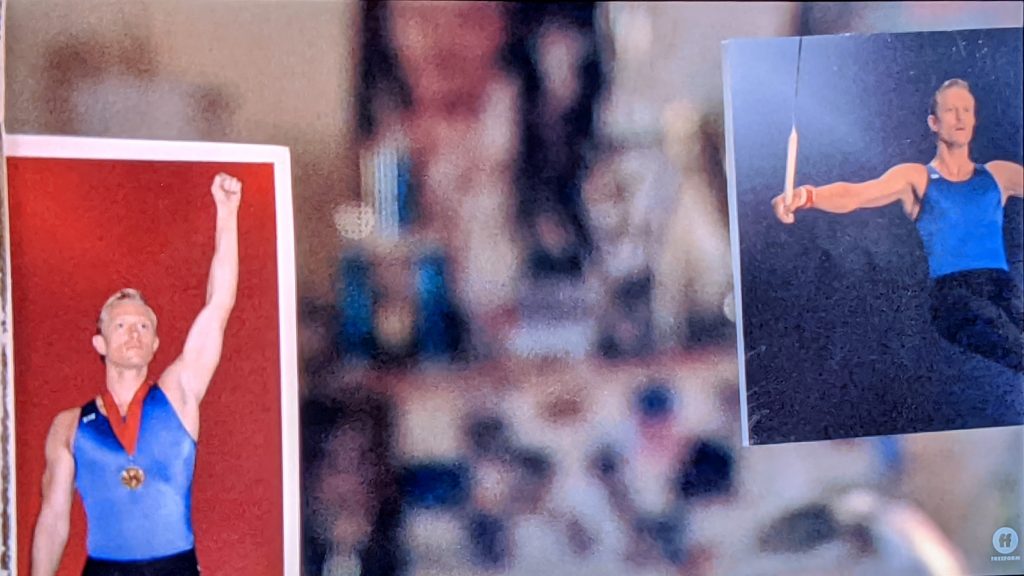 Kim is talking to Summer about a petition for her parents’ board campaign. Mark/Mike/Whatever is annoyed that she didn’t consult him before deciding to run. I genuinely appreciate how well this show captures the male Boomer ethos.

Austin Tucker arrives at the Rock in yet another ludicrously expensive car. Seriously, where is his funding coming from?! But also, if he can afford a three story foot lake house and a Porsche Carrera, you’d think he could afford a shirt with sleeves. 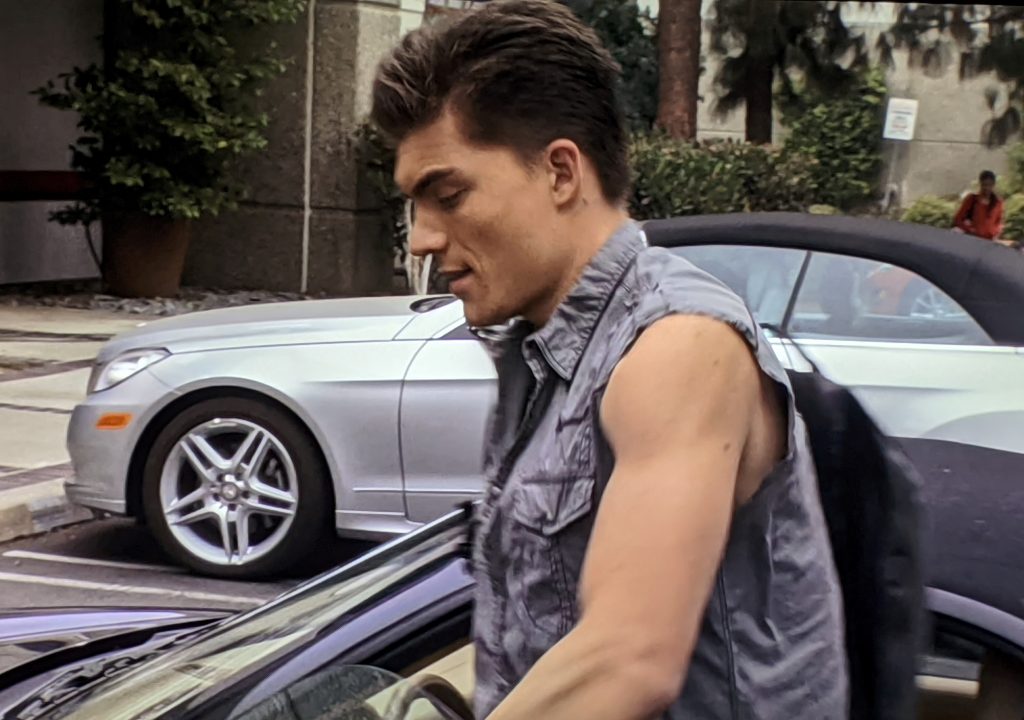 Kaylie nearly falls over getting out of her car and Austin helps her. He notes her hands are freezing. She tells him their kiss meant nothing to her, which he says is cool.

Chloe and her Bump It are waiting in the entryway to confront Lauren. She insists she didn’t know Steve was behind Emily’s scholarship fund. She tells Lauren that this whole debacle has taught her that “Secrets, secrets are no fun…” and she feels obligated to tell Steve about Carter.

Payson is leaning into her new balletic persona (which is fun, because actress Ayla Kell is a classically trained ballerina). Sasha says her movements are “technically proficient” but he needs to “feel the deep emotion brewing behind the experience.”

Kim tells Summer she doesn’t think she can run because her husband doesn’t want to be those parents. Summer insists this is for the good of the Rock because Steve Tanner’s agendas are generally nefarious. She’d know… She thinks Steve would end up pressuring the other board members to fire Sasha, which would ruin everything.

Austin is filming himself on pbars. Weirdly, mid-routine, he changes clothes and changes back.

Kaylie asks him to film her doing vault, and he makes it kind of creepy because #boys. He notices her right hand is twitchy and that she has to catch her breath afterwards. Austin is vaguely concerned.

Steve and Chloe talk in her car (which Steve paid for). Chloe says Emily feels like a fool. Chloe thinks lying is wrong, but his motives were “sweet,” so she’s not dumping him.

Carter arrives and Lauren tells him that Chloe’s threatening to expose their doing of it. Carter says they should tell him together and assure him that they’re being safe and all that. Lauren says, “It might be more convincing if you told him you love me.” Carter’s like, “Yeah, no, we’ll just tell him we’re responsible.”

Summer sees Lauren’s upset and offers to listen if she needs to talk. I shit you not, Lauren says verbatim, “You know what I really need? For you to marry my dad and become my stepmom.”

Sasha brings Payson out to the parking lot with a giant canvas and paint, saying he wants her to do the dance part of her FX in the damn paint to make “fluid, flowing lines.” Y’all , I’m f***ing out. 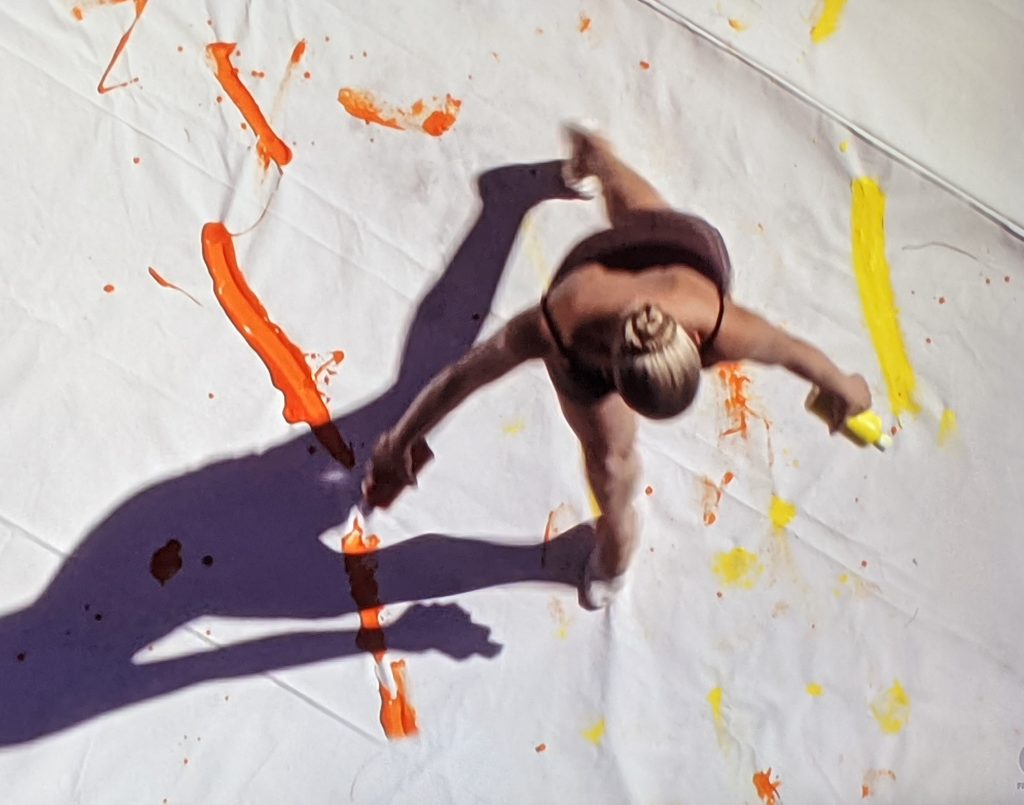 Emily’s looking in the couch cushions for change so she can take the bus to her shift at Pizza Shack. (What happened to the sweet ass car Lauren’s Daddy bought them?) Chloe accidentally spills that she’s still up on Steve Tanner’s business. Emily’s like, “Can’t I have one thing that’s mine. Also, why don’t you have a job?!”

(Chloe bleats that she has a new job, but too little too late, IMO).

Sasha and Summer are having date night in front of his trailer. Remind me:How does Summer—the Rock’s secretary—afford a three bedroom house in Boulder while Sasha is living in an Airstream in the parking lot? He asks if they can have just one date that doesn’t mention Steve Tanner.

Summer goes in to grab more vino and finds that Sasha has a book called Unlocking Christianity, and it revs her engine. She’s emboldened enough to ask Sasha if she can say Grace before dinner.

Payson swings by with extra food for Sasha and gets run off by the sheer awkwardness of the situation, as she should.

Next day at practice, Payson’s FX is vastly improved. Sasha says it’s still not quite there; she needs to become a character. Her favorite story is Romeo and Juliet, so he says she should be Juliet right after her first kiss. Umm, we’ve crossed into some territory that would make even Miss Val say, “Ehhh…”

Carter tries to make nice with Lauren and is like, “BTW, totally forgot to say, ‘I love you’ earlier…” She says, “Uh huh… I love you, too,” and makes this face 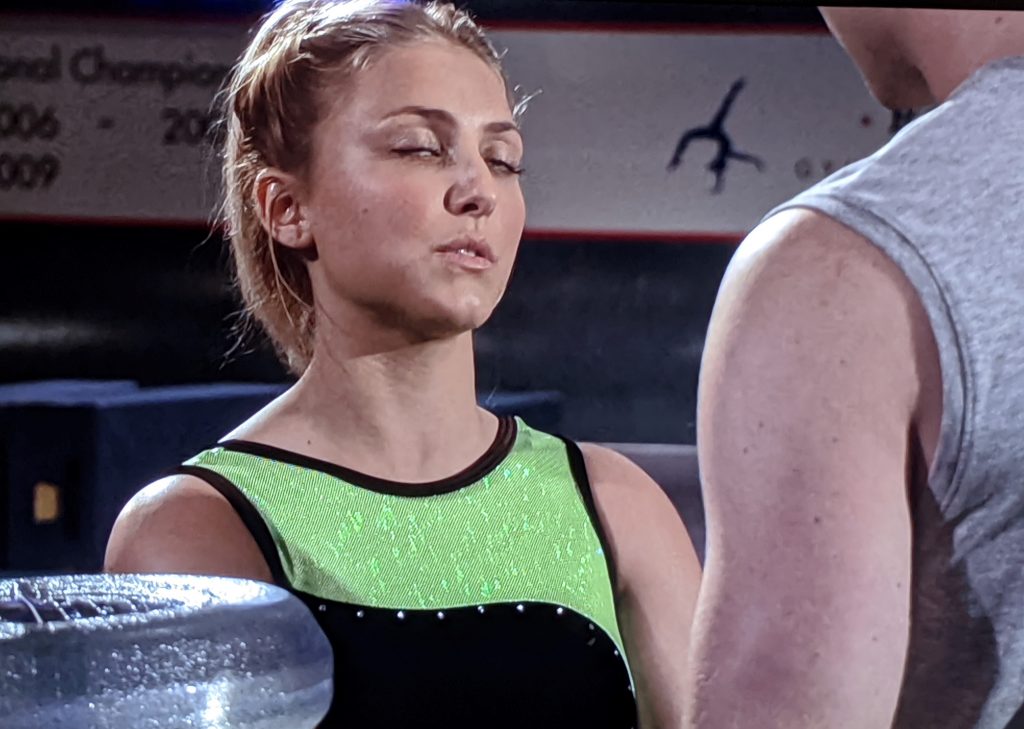 Summer comes out as soon as Carter leaves. She tells Summer that she and Cater have been *whispers* sexually active and Chloe Kmetko not only knew, but bought her condoms and took her to an MD to get the pill.

Lauren then asks Summer to tell Steve about their having of the nookie, but says, “Please don’t mention Chloe so she doesn’t get in trouble.” For the second time in this blog…

Austin convinces Kaylie to go for a ride in his $120K Porsche. He takes her to a lake and sets out a fancy fresh picnic. She repeatedly says, “I’m not hungry,” and he ignores her. She finally asks, “Are you testing me?” and  takes a bite to shut him up.

Austin reveals that his younger sister (also a gymnast) struggled with an ED, so he knows the signs. She’s actually kind of responsive, even admitting, “I’m getting a little too intense with my diet and exercise, but it stops today.”

Chloe shows up at Steve’s and he looks like this:

Summer “Ask Me No Questions…” Van Horne called Steve and blabbed about Carter, Lauren AND Chloe, and now Steve doesn’t trust Chloe with his “most precious” Lauren.

Brian Kmetko is doing his homework by lantern because the electricity and AC have been shut off.  Brian’s arm is tingling; apparently he hasn’t refilled his seizure meds… ????? [CGN’s resident photographer extraordinaire Emily and I ran a fun differential diagnosis over this scene. TL/DR: It’s not lupus.]

OMG, this a-hole pharmacist won’t give Emily Brian’s $2200 seizure meds because he can’t figure out her copay, so she steals the pills.

Carter shows up to talk to Steve Tanner man-to-man. Lauren tells him she’s already dealt with it by throwing Chloe under the bus. By her own admission, Lauren is “many things, but stupid isn’t one of them;” she knows he doesn’t love her and is going to get him kicked out of the Rock.

Mike/Mark and Kim seem to feel exactly how I feel watching this episode. 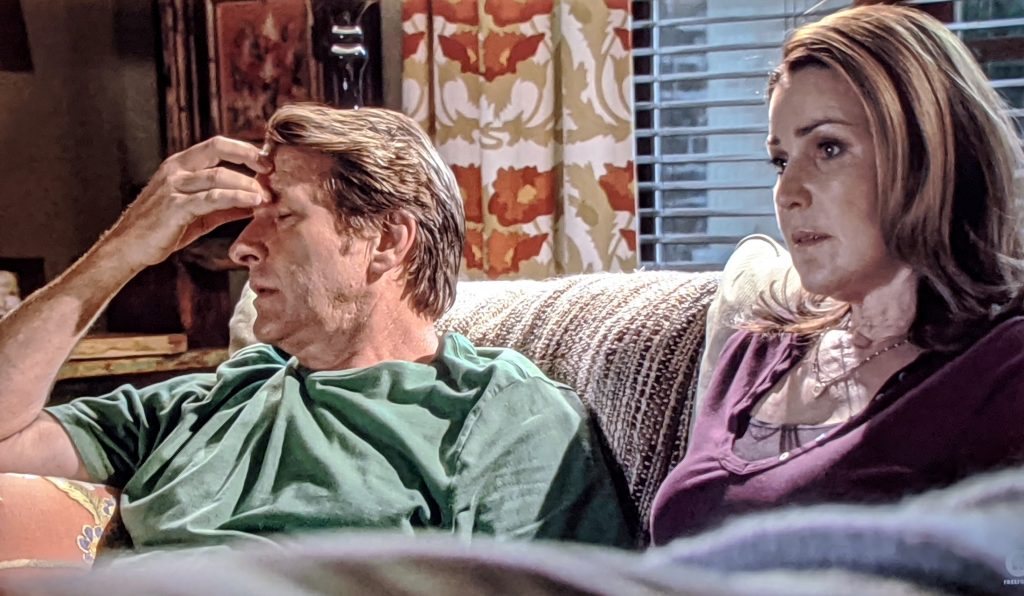 He asks Kim if Sasha is worth falling on a sword for. She says yes. He makes an icky comment about buying his vote with sexual favors.

Sasha is videotaping Payson’s FX and he’s blown away by her artistry. Then this series of SafeSport violations happens:

Emily has given Brian his pills and he’s feeling better. They’re speculating about their mom’s new job, which feels like foreshadowing?

OH DUNK, THE DOORBELL RINGS AND IT’S THE COPS.

OK, SERIOUSLY?! I assumed they were there to say Chloe had been arrested, but they’re arresting Emily for stealing Brian’s pills. 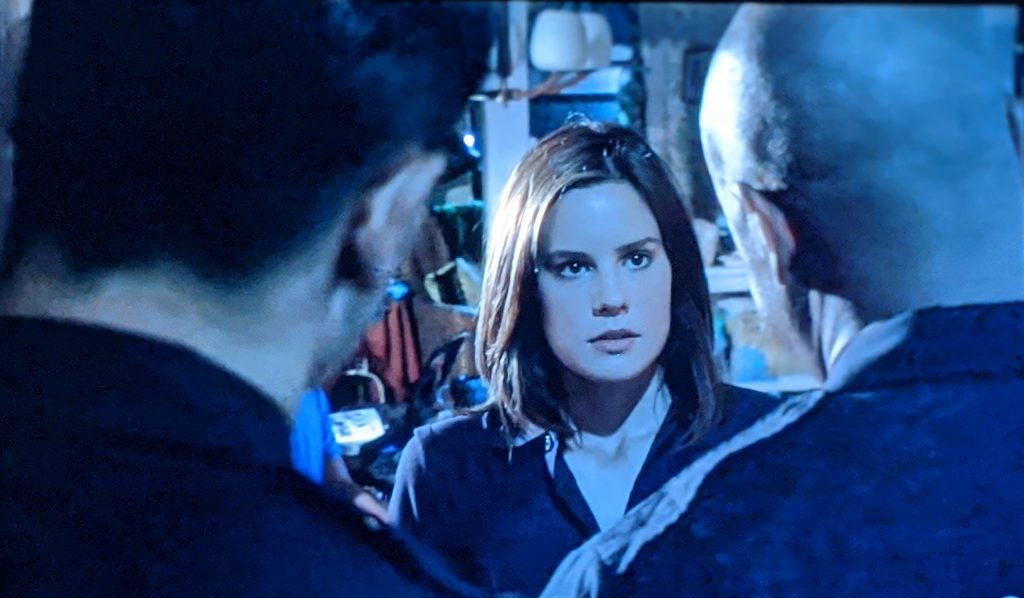 Kaylie’s writing down her daily caloric intake and hopping on the stair-stepper, so I guess she lied to Austin.

Faker Than Carter’s Confession of Love

Yeah, despite the positive rating, this episode seriously bummed me out.