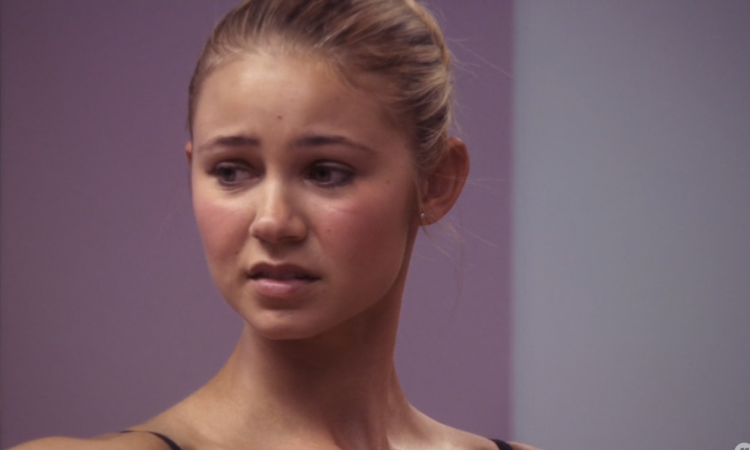 Want to watch along? You can find MIOBI on Hulu and the Freeform app. All you have to have is a subscription/cable login. You can also buy the DVDs or purchase seasons or single episodes on various platforms, like iTunes. Join us in the cheesiness and the early 2010s TV gymnastics by using the hashtag #MakeItOrBreakItDown on Twitter as you watch.

Episode 7: What Are You Made Of?

The girls are all working out at Chez Cruz in preparation for the last practice before national team camp. And maids. There’s a maid. 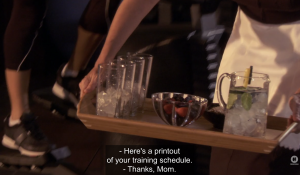 I want a spinoff of the movie “Parasite” about class dynamics between the Cruz family and their apparent fleet of servants.

At the Rock, Summer and Sasha plan how they’re going to welcome Ellen Beals and the NGB to the Rock. Kim is mad they still have to be nice when the NGB screwed their daughters over, but Sasha says they have no choice if the girls want a spot on the worlds team. In short, this could be the entire “Realer Than” section of the Balance Check.

Chloe tries to talk to Lauren about the dirty scene she witnessed the night before, but like all sex talks on this show, it quickly devolves into the worst thing ever.

She tells Lauren she might regret having sex with someone she doesn’t fully know cares about her, and Lauren is a little too appreciative of the advice. Whatever it takes to hide the information from this lovable idiot. 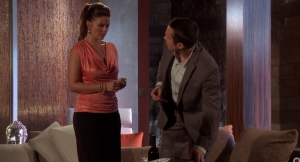 Yup, that key-shaped object in his hand is in fact a key to the house. Maybe I picked the wrong family to star in a “Parasite” spinoff earlier.

Back in the slums, Emily complains to Chloe about being poor and stressed about the practice and being poor. Hey, at least you have a full-sized bed. I was 21 before I had one of those. 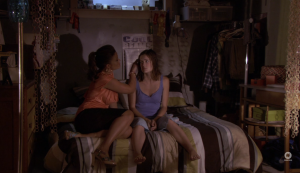 Practice gets off to a spicy start when Kelly Parker and her Stepford Wife friends blow the Rock girls off because the Rock girls “think they’re too good” for the national team.

Beals and Marty are upstairs discussing possible team permutations in a totally planned and thoughtful manner.

You thought. It’s clear Beals doesn’t trust Emily still while Marty wants to give her a chance. I doubt this will result in any tension down the line.

During the workout (which consists of the very gymnastics-oriented practice of wind sprints??), the girls talk trash in the only position they know how. 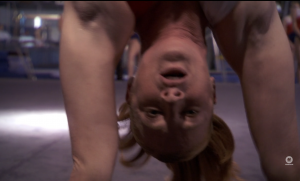 I’m horrified. This nameless individual provokes Emily and she helpfully responds “I’m not talking to you.”

Payson, meanwhile, is spending the day at ballet class, which to her is the equivalent of an hour in a holding cell at Guantanamo Bay. 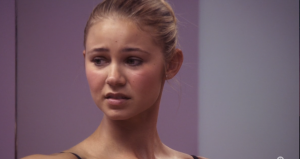 There’s probably a lesson we’ll learn from her relationship with the goofy ballet teacher, but I’m too tired to speculate on that as of now.

Marty and Kaylie’s mom reunite, and I think he’s either happy to see her or is passing a kidney stone. 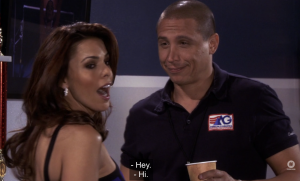 He apparently *is* happy to see her because, upon her telling him she’s getting divorced, he reveals he still loves her. A great time to reveal this not at all pressing conflict of interest when her daughter is about to compete for an international assignment.

Sasha tells Beals and Marty about Kaylie’s new Arabian mount, which she doesn’t want to perform, but they basically force him to make her because “this is national team practice. Your opinion doesn’t matter.”

Beals then kicks Sasha out of the gym because she’s tired of…his face? His general bullshit? Nope, just his advocating for the best interest of his gymnasts. And out he goes.

She then distracts Emily on beam by giving her a tutorial on the proper way to milk a cow. 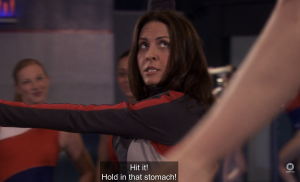 At the chalk bucket, Kelly tells Kaylie she looks too thin in an effort to watch out for her, but because that goes against literally any other inclination Kelly has shown, Kaylie takes it with a grain of salt.

Payson tells Sasha about her ballet class while he intently channels Allison Williams in the “Get Out” Froot Loops scene. That’s to say his mind is elsewhere. 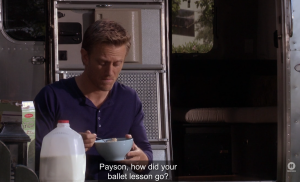 Chloe reveals to Emily that she’s considering purchasing a new house with all their surplus money. Even though Emily is the most realistic character on this show, she still takes the time to fantasize about what it could be to live in a home with a kitchen. 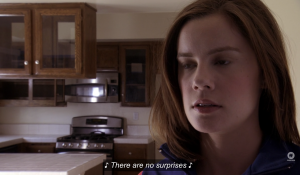 Now for the most uncomfortable screenshot this show has ever produced. 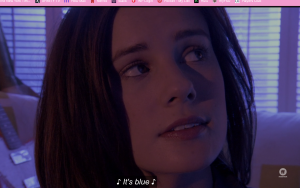 This was on screen for far too long. I don’t need to see anyone’s individual, chalk dust-clogged pores.

Ellen Beals is in Steve Tanner’s house as they discuss the Emily situation. Steve feebly defends her, but Ellen insists that he’s “putting his money on the wrong horse.”

Chloe walks in and assumes the worst when she sees Marta of the West with her man, but Steve insists they were just talking about how much promise Emily has. And Chloe brightens.

At national team practice, probably mad because Steve didn’t respond to her come on, Ellen Beals bans parents from entering the gym. 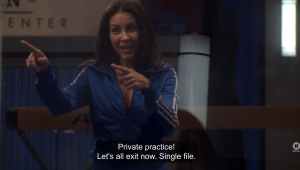 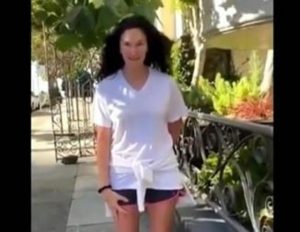 Sasha shows up to bring a little eye candy to ballet class. For a man who nitpicks every little detail like he does, you’d think he’d show up in an actual outfit other than one designed for hitting on girls at bars. 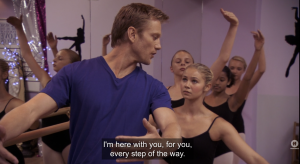 Emily rolls her ankle at practice and Ellen complains to Marty about how she just keeps showing up and impressing at competitions when she could be just sucking and leaving the national team spots to girls who obey the rules.

Marty dares to stand up for Emily and is promptly fired by Beals, who announces she’s now the coach of the national team. She makes this announcement flanked by the other members of the selection committee, which kind of undermines her credibility based on the fact that they all look like employees of a local bank. 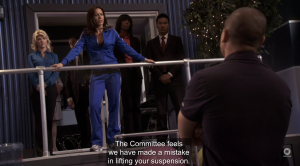 As the selection process begins, it’s clear Beals has gone full Dolores Umbridge. She insults Emily under her breath and prevents her from doing vault, forcing her instead to go on beam. It’s so funny when people try to prove a point while sabotaging themselves in the process.

Emily does decently well on the 4-inch piece of wood. Her downfall comes not on an event, but when Beals gives Lauren an envelope to give to Steve and Lauren opens it to find a check for Emily’s scholarship.

Lauren, who was doing a good job at not being the least likeable person in the episode for once, immediately goes and tells Emily. I have to say I understand why Lauren’s upset because her dad is all she has in life, and to treat someone else like a daughter has to be hurtful to her. But to sabotage said other daughter’s day at a competition? That’s where I draw the line.

Emily freaks out and yells at her mom for what feels like the 8 millionth time in the series. Her mom insists she didn’t know Steve was behind the payments, which Emily appears to accept and then just…goes and does well at selection camp. 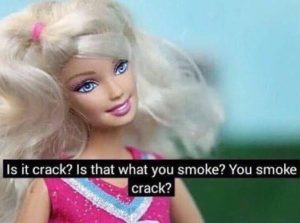 While this is happening, Payson, clearly googly-eyed because Sasha is finally paying attention to her, buries her head in a copy of the second-most important work published in our time (after “Becoming” by Michelle Obama, of course). 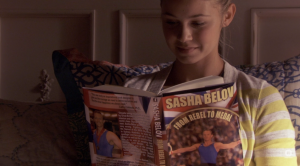 She goes over to Sasha’s to deliver him a hand-cooked Romanian meal since he’s been exiled from national team practice. Isn’t this how the movie “Misery” started?

Sasha is inspired by a woman stooping to what he believes is her God-given state (serving food to a man), so he gives her a trophy only she could deserve: 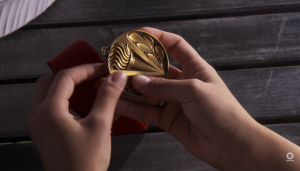 Just kidding, that’s just a token for Payson. He wants her to keep it until she medals at the Olympics. Kind of reminds me of when Kyla Ross’s dad hung up the picture of the Olympics schedule to motivate her before London. Except…more wholesome.

The team for worlds tryouts (apparently this isn’t *for* worlds?) is announced and everyone from the Rock is on it. Emily escapes Beals’ velvety clutches to live for one more day.

Sasha and Summer find out Steve is running for head of the Parents Board (USAG: Do this!) and encourage Kim to run to fend off Steve and make sure a non-Beals ass kisser is representing the girls.

Later, the girls exist in various levels of FML as Lauren cries over her dad’s betrayal, Kaylie stares at her figure in the mirror, Payson ogles the medal a little too closely and Emily…smiles. The thing I took away from this scene was definitely how much the way the girls morphing into one another resembled the cover of the Animorphs books. 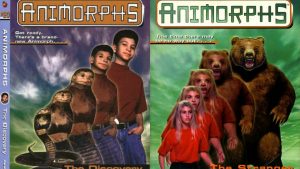 MIOBI earned a -5 this week, which will likely be the value for Kaylie’s nonsensical Arabian half bars mount.