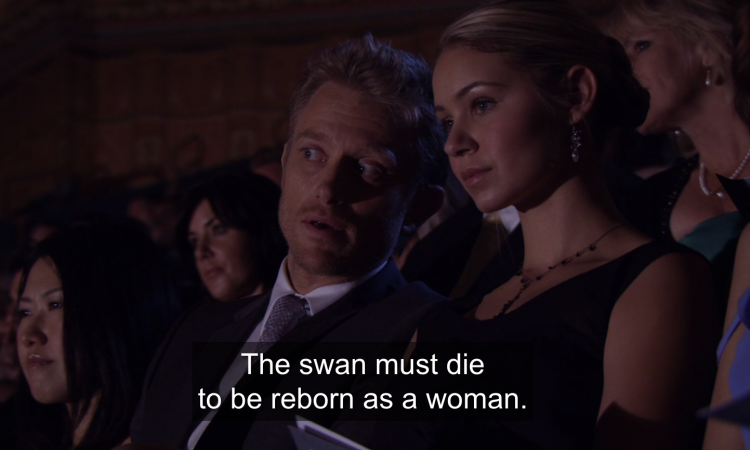 So I immediately thought of this lyric in this song:

Kaylie’s father comes out of exile at the hotel to visit her and she says she wants him to be her manager again because they “share the same drive.” Dad-agers…I have questions.

Lauren asks Carter if their relationship is only about sex and he says no. In my opinion, the worst time to ask this is after you’ve (presumably) just had sex, but the answer would probably be just as ludicrous regardless.

After we get this coronavirus under control, I want medical funds diverted to a study that tracks 18 year olds who claim they “take love very seriously” and their ensuing divorce rates.

At the gym, the girls are speculating on which local harlot Austin Tucker will be showing up to the gym with that day. When he arrives, guess who it is? 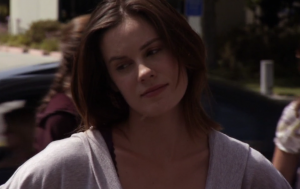 Emily says she hitched a ride with Austin because her car was having issues. If that’s true, that makes the girls’ ensuing responses even more capitalistically evil, since they freak out on her for getting involved with boys. It’s the (gendered) economy, stupid.

It’s time for the girls to start prepping their floor routines for world team tryouts. The Rock has enlisted the help of an expert fast food franchise cashier, so I can’t wait for the final product. 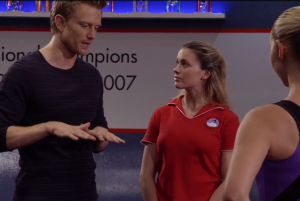 Lauren, disgusted at the idea of working with a pedestrian instructor, sets to work looking for more Hollywood-level abilities. Because she’s going onto America’s Got Talent, not worlds team tryouts.

In a shocking turn of events, Payson’s already annoyed because Sasha wants her routine to be more artistic.

The imagery Sasha espouses to Karen from Wendy’s references flowers and butterflies a little too much for me to take it seriously. Can’t wait for the music to be an instrumental version of the “Veggie Tales” theme song.

Steve and Chloe are making out in the gym lobby when Kaylie’s mom comes in and is justifiably disgusted. Her ensuing comment (surely made out of spite for the fact that she currently doesn’t have a man) makes her a truly phenomenal contender for the Real Housewives of Boulder. 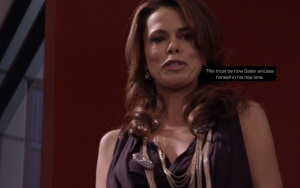 Chloe finds out that Kaylie’s dad will be managing her now, and she decides it’s a brilliant idea for her to do the same for Emily. Repeating that Kris Jenner GIF because it’s more applicable now.

Her first act as Emily’s fixer manager is to call choreographers at the behest of Steve Tanner, but all she knows are Vegas promoters, so I’m fully expecting a drag queen to show up and I can’t WAIT.

Carter shows up and apologizes for that morning’s awkward conversation about sex. Lauren proposes they go on a date to make up for it, forgetting to make any calls to the elite choreographers who’ll make her dreams come true. Funny how focusing boys and not gymnastics isn’t an issue when you’re the one doing it.

They then decide to make out as well. And look who sadly has to witness it. 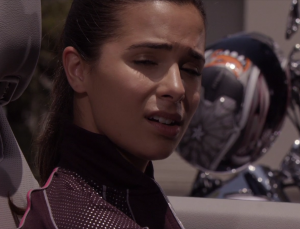 I love how Kaylie’s face whenever she sees something she doesn’t like is a mix of judgmental and constipated. Because same.

Austin comes over to save the day by asking Kaylie if she wants to “make them jealous.” Disguising a weird come on as a chivalrous means of helping her get back at a bad friend is…a choice.

Kaylie, to her credit, says no and speeds away. Her strong will has to erode sooner or later for plot purposes, but for now, I’m proud.

In the inner sanctum of the Rock office, Summer reveals she’s found a pair of tickets to the ballet that she’s pretty sure is meant for Sasha to take her on a date. Summer, didn’t you see what happened to Emma Thompson’s character in Love Actually when she found the necklace? It never. Works. Out.

Austin invites Kaylie and Emily to a party. Emily is clearly interested but Kaylie’s like why would I dance at a frat rager when I could dance like this to my mid-90’s banger floor music in a hot gym?

The mysterious Lacey Grimes arrives at the gym ready to rehearse with Emily and she brought her best bikini top for the occasion. Is it ever pool weather in Colorado? 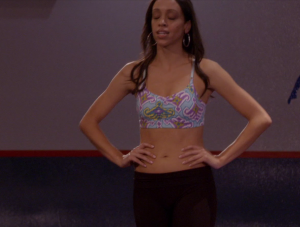 Like Julianne Hough watching Napoleon Dynamite, Lauren fumes at this sad display and asks her father why he couldn’t have hired Lacey Grimes for her instead. Turns out he was the one who tipped Chloe off to hire her in the first place. Lauren probably could have still arranged to work with Grimes, but she was too busy going on a date with Carter that he probably didn’t pay for.

Summer gets excited when Sasha asks her what she’s doing that night, but it turns out he’s just asking to make sure she’ll be at the gym while he’s at the ballet…with Payson!

He says it’s just to expose her to more artistic performers, but based on this weird display of the two of them looking like they’re going to prom, I’m not convinced. 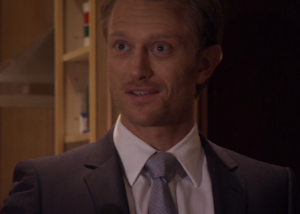 Sasha looks like he just had to shake Payson’s dad’s hand and the handshake was just a little too tense.

During an uncomfortable dinner, it’s clear Kaylie’s mom doesn’t agree with Alex’s management tactics, particularly the choice of her floor music. To keep the peace, Kaylie suggests that her music be a remix of Gershwin-esque Americana and…club music. Alex, I’m gonna agree with you here. 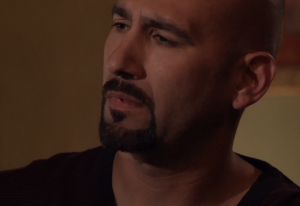 Although, hey, if it worked for Olivia Karas in 2019, maybe it could here too.

Outside the ballet, Payson tries to get Sasha to rethink this whole ballet thing and just go drink instead. Well, drink sparkling cider, that is. But I have to say drinking is probably preferable, too.

Emily’s having just as much fun doing choreography in the gym when Austin walks in. He says he can kind of relate to her plight of being the black sheep: He lived in a van for three weeks while training in Dallas. Then he offers to take her on a not-date to the Pizza Shack. Ladies, any man who says he relates to you then offers to take you to the former workplace you left in disgrace…doesn’t really relate to you.

Payson is enjoying the ballet more than she thought, even with Sasha offering weirdly voyeuristic interpretations into her ear the whole time.

At the Pizza Shack, Austin blows away any previous image of him as a humble everyman by telling Emily to suck it up and pay the $2,000 because it means she’s going “all in.”

Easy to say when you probably dropped $2,000 on motorcycle improvements in 2009 alone.

Lauren comes in and is gleeful to see all this unfolding. Because it means Emily is defying Kaylie? Because she’s spending less time working with Lacey and therefore probably going to bomb her floor routine? Because she loves drama? She postulates and Carter reaffirms to her that she’s just as talented as Emily the pizza eater. So she did it to fish for compliments. Okay.

Payson and Sasha meet the ballerina who dazzled them onstage, and it turns out she’s a stocky tomboy just like Payson. 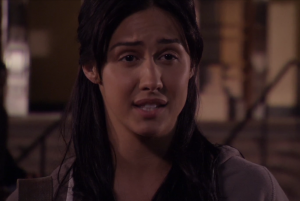 Yup, that’s the label she got. This is why girls question themselves.

At the gym the next morning, Summer passive aggressively storms out when Sasha mentions the ballet, so Kim gets real with him.

Who was talking about relationships and dating in third grade? Raise those hands up, wow there’s so many of you I’m having trouble counting…

Speaking of relationships, Kaylie shames Emily for daring to be seen in public with Austin, which Lauren tipped her off about. Lauren, sensing a Emily’s vulnerability, asks why she can’t be “just friends” with boys, which she mixes in with a reference to Carter being in love with her to make sure Kaylie doesn’t get her just desserts.

It’s time for the showcase performance of the new floor routines. Fueled by the anger of knowing about Carter and Lauren, Kaylie gives an impassioned performance that gives new meaning to the the concept of a reanimated corpse. Picture the Roger Rabbit but even more disjointed/heavily medicated.

On the bright side, mutual hatred of this routine might just rescue Kaylie’s parents from the throes of divorce. Hopefully they can invest the money from attorney’s fees into a better choreographer.

Next, Lauren delivers a sensual routine to the tune of a 1930’s New York strip club burlesque track. 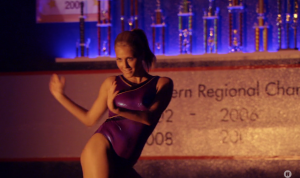 The sexy choreography is all too familiar to Emily because apparently it’s what Lacey Grimes was trying to teach her all along. I didn’t recognize it because the gulf between their performances is truly wider than the Pacific. Nevertheless, a steal is a steal, and Emily goes to the lobby to sulk. 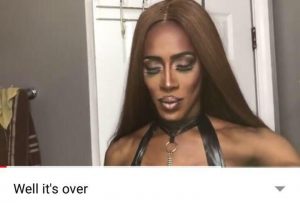 Austin comes out to clarify that Emily’s going to drop out of the performance just because Lauren stole her thunder. When she confirms that, yes, that’s what she’s doing, Austin is confused because he doesn’t recognize the concept of quitting while you’re ahead. So he tells her to go do it anyway.

The result is the same choreography as Lauren but to music that sounds like it’s the coronation anthem for a small European country. And it’s fine.

After our long national nightmare *ahem* the showcase concludes, Sasha finally works up the courage to ask Summer out. 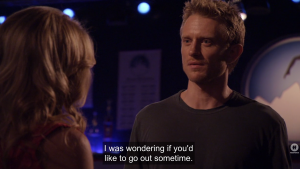 I’ve heard so many men beat around the bush with their lackluster communication skills that to hear these words was actually painful, like having a bandaid ripped off.

On the bright side, at least this (hopefully) rules out any question that the previous night’s dalliance at the ballet was nothing more than a weird way to tell someone to be more artistic.

Payson didn’t perform tonight, but we see her practicing in a Flashdance-esque way, waiting for her moment to shine. Something tells me she won’t be dousing herself in a bucket of water—obviously she’d mess up that perfect bun.

Realer Than Austin’s Lack of Creativity in Deciding Date Spots

MIOBI earned a -3 this week, which should represent Chloe’s credit score after springing for that expensive choreography.

MIOBI scored a -2 this week, which represents the amount of choreographers in gymnastics land willing to work with Rock gymnasts after this episode’s goofy display.